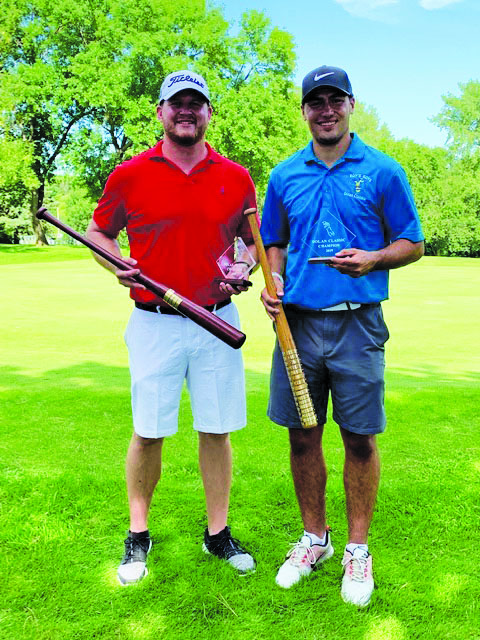 TRACY – The 49th Dolan Classic family golf tournament was played on Friday and Saturday at the Tracy Country Club. The annual event involves the direct descendants of the John and Mary Dolan family and their families.

Emily Minett, the Tracy Country Club manager, welcomed the enthusiastic golfing participants and others that numbered about 100 family members. Eighty-eight people took part in this tourney, in which 48 men and women played golf in a “Handicap tourney”, and 40 golfers competed in “Alternate shot” events.

The handicap tournament consists of 36 holes of play to determine the top three-team finishers.

The top teams then compete in a three-hole playoff to determine the winner of the Classic. This year’s tournament winners were Isaac Dolan and Bradley Rose. Isaac, and his wife Chloe, live in Rochester. Bradley Rose resides in Le Sueur. The winners had a combined net score of 12-under-par during their first 36 holes and prevailed as ultimate champions by one stroke during a three-team playoff.

Trophy winners of the Saturday alternate-shot event were Kathy Aune of Minneapolis and Sandy Krenik of Woodbury, who scored a 9-hole combined team gross score of 50 strokes. Team winners of the Friday alternate shot event were shared by Andy and Donnie Schmidt of Milroy and Susan Dolan of Edina and Ryan Rohlik of Marshall. Each had team scores of 44 strokes for that separately held 9-hole tourney.

The low gross champion players of the tourney were Andy Dallmann and Brad Hengel who shot a total score of 147, or only 3-over par, for the tournament. Andy and his wife Abby are residents of Marshall. Brad Hengel, from the Lucan area, currently lives in Cabo San Lucas, Mexico.

The Founder’s Award is a special recognition awarded to persons that have contributed to the success of the tournament over many years. This year the Founder’s Award was given to members of the Gravel Road Band. These Dolan family performers have entertained at the Dolan Classic’s “sing-a-long” event for many years. Mike Dolan presented the award saying, “The Gravel Road Band and singers perform as a labor of love and are an essential part of the annual family event.”

The family is extremely grateful to the continued ancestral research done by Michael Dolan and his wife Cela, who reside in Edina. Mike recently completed his third book documenting the Dolan family heritage and gave a copy of the book to all family members as a special gift.