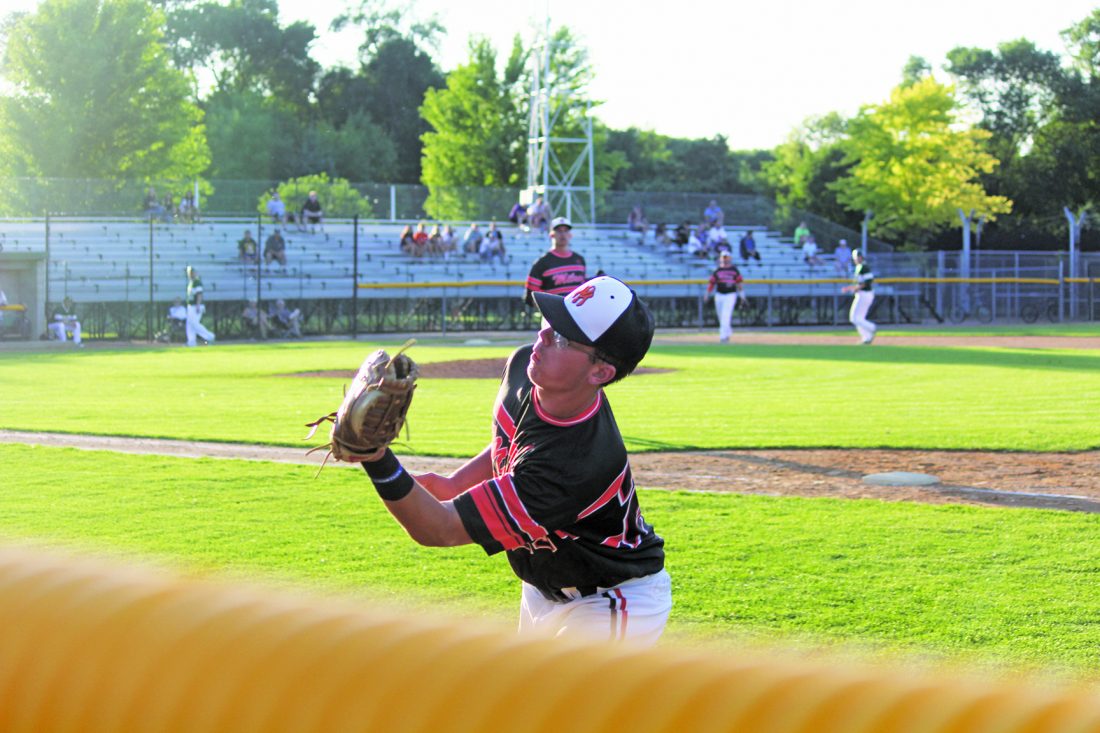 Photo by Jake Przytarski Milroy’s Isaac Schmitt makes a catch near the fence during their game against Marshall on Friday.

MARSHALL - The Milroy Yankees earned a hard-fought Corn Belt League victory on Friday by battling back from a 4-0 deficit in the first inning to defeat the Marshall A’s 5-4 at Legion Field.

The victory for Milroy (8-12, 5-6) vaults them into a tie for fourth-place in league standings with Sacred Heart, and pushes Marshall (12-4, 9-2) into a tie for second-place with Raymond.

The A’s scored all four of their runs in the first inning with a one-out rally complete with three hits. Marshall scattered four more hits in the remaining eight innings for a total of seven in the loss.

The scoring began with a one-out RBI single by Zach Olson to drive in Ryan VanMoer, who reached base earlier in the inning on a Milroy fielding error. Alex Thompson loaded the bases in the next at-bat with a base hit before Marshall’s starting pitcher Logan Tomasek connected on a two-RBI single. A fielder’s choice out by Ryan Schwagel drove in the fourth and final run.

After being held to only two hits through the first four innings, the Milroy Yankees caught fire at the plate in the fifth with a four-run frame featuring five hits. Milroy would finish with eight total in the victory.

Derek Rasmussen and Eric Dolan led off the inning with singles and later scored on an RBI base hit by Riley Carpenter. Jackson Hughes kept the rally going with another RBI single before a ground out by Matt Bauer scored the team’s third run. A wild pitch drove in the fourth run.

The difference in the ballgame came down to a throwing error in the sixth inning that base runner Rasmussen capitalized on to score Milroy’s fifth and final run.

The A’s will look to rebound with a crucial home-matchup with the Corn Belt League-leading Bird Island Bullfrogs on Sunday at 5 p.m. The Yankees will also return to their home field on Sunday with a 1:30 p.m. contest with Sacred Heart.