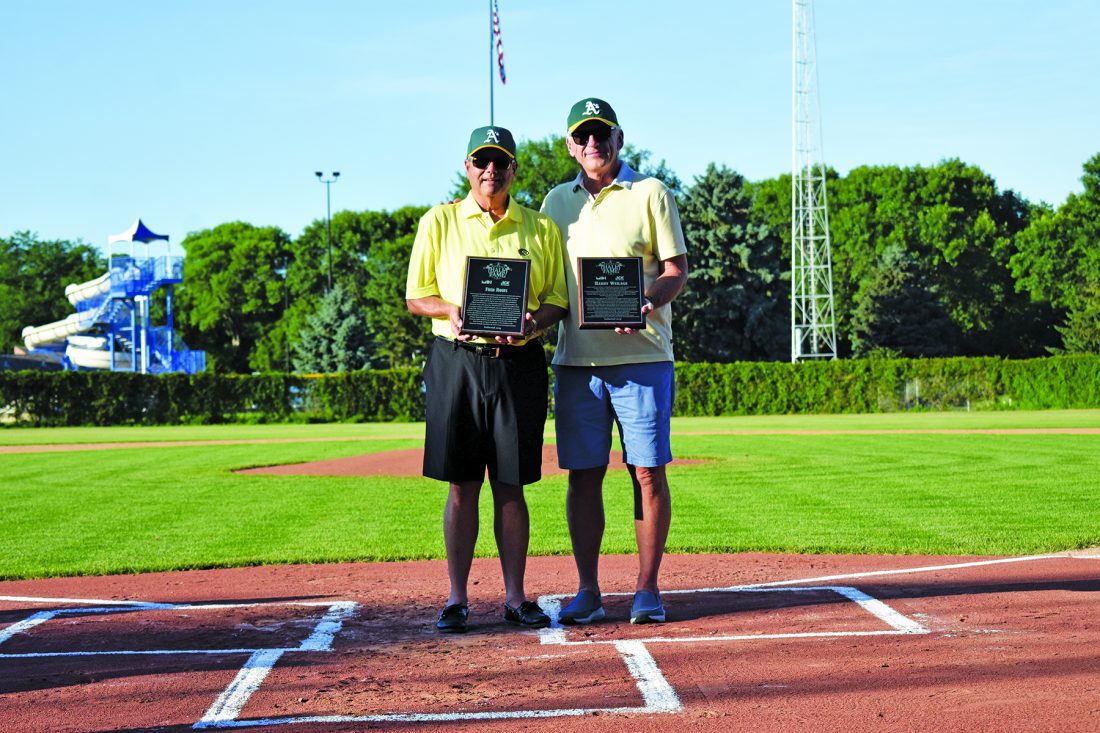 Photo by Sam Thiel Fred Roufs (left) and Harry Weilage (right) pose with their plaques after being inducted into the Ace Hardware/MDI Marshall Baseball Hall of Fame on Friday before the A’s game.

MARSHALL – When baseball fans stop by Legion Field, they’ll notice an array of unique features, from Wrigley-esque ivy covering the outfield to the raised grandstand that overlooks the park.

It didn’t always look that way, however, as it took years of hard work, dedication and a vision from many individuals to create the ballpark into what it is today.

Two of those minds were Fred Roufs and Harry Weilage, who have both been staples in the Marshall baseball community throughout the past several decades. On Friday night, Roufs and Weilage became the latest inductees into the Ace Hardware/MDI Marshall Baseball Hall of Fame.

Roufs said it’s an honor to be selected and it’s fun to be able to make his way back to the field.

“I thought it was quite an honor and it’s fun to come back, take a look at the field and see what’s going on,” Roufs said. “I try to follow how the team’s been doing, they’ve got a lot of local kids and have been having a nice season this year, so it’s fun to be back.”

Roufs said it was important to be able to bring state-level tournaments to Legion Field.

“I think it’s a big thing for the community; it’s great for the hotels, the restaurants, the businesses. But when we started out here, they used to play football on this field and they had a cinder track going around the outfield, so the field was kind of in rough shape,” Roufs said. “When they built the new football field and track over by what is now the old high school, they opened this up for baseball only and the field really looks awesome now, they’ve done a nice job upgrading it.”

Roufs, who currently serves as the vice president of the Minnesota Baseball Association, added what makes being a part of the Marshall A’s organization so special is the family atmosphere among all those involved.

“It has a good small-town feel to it, everybody cheers for the same kids. You have one high school, so you’re cheering for your neighbor’s kids or the kids of the people that you work with. You’ve also got bat boys that grow up and they play on the team, so it’s a family affair.”

Weilage is currently serving his fourth decade on the MBA board and said Legion Field has a special place in his heart.

“Legion Field has always kind of been the benchmark for what we did in my time here and that’s coming up on 40 years,” Weilage said. “To be honored, to be back at Legion Field, I had my retirement at Legion Field; this is a place I love dearly and Legion Field is a great facility for Marshall.”

Weilage’s contributions to Legion Field began in 1980 when he took a job with the City of Marshall in the Parks, Recreation and Community Education department.

“When we first came here, there was a cinder track and a snow fence and it was not what you would call a baseball field,” Weilage said. “It was trying to be a track, a football field and a baseball field. With Fred along with Darrel Wiener, we had a vision of what we could do at Legion Field.”

What he did envision, though, was something much more. Weilage wanted to implement an irrigation system, better lighting, a brand-new sound system and scoreboard, improving on the grandstand and putting the famous Boston Ivy along the outfield fence. He also wanted to turn Legion Field into a baseball-only facility.

Weilage would help turn those visions into a reality, and as a result, it became award-winning. It has also led to a lot of other improvements throughout the city of Marshall and Weilage added it’s been a great sight to see the community come together to provide newer facilities for people to enjoy and was proud that they could lead the way with Legion Field.

“Legion Field was a benchmark when the community wanted to build a lot of new facilities. Whether it was schools, bike trails or new ice arenas, Legion Field set the benchmark,” Weilage said. “When it won its national and state awards, it just helped our community understand that we could it. It wasn’t about what we couldn’t do, it was about what we could do. Even the new facilities at SMSU came out of the community saying we need to do a little better, so that’s been the best part of it.”