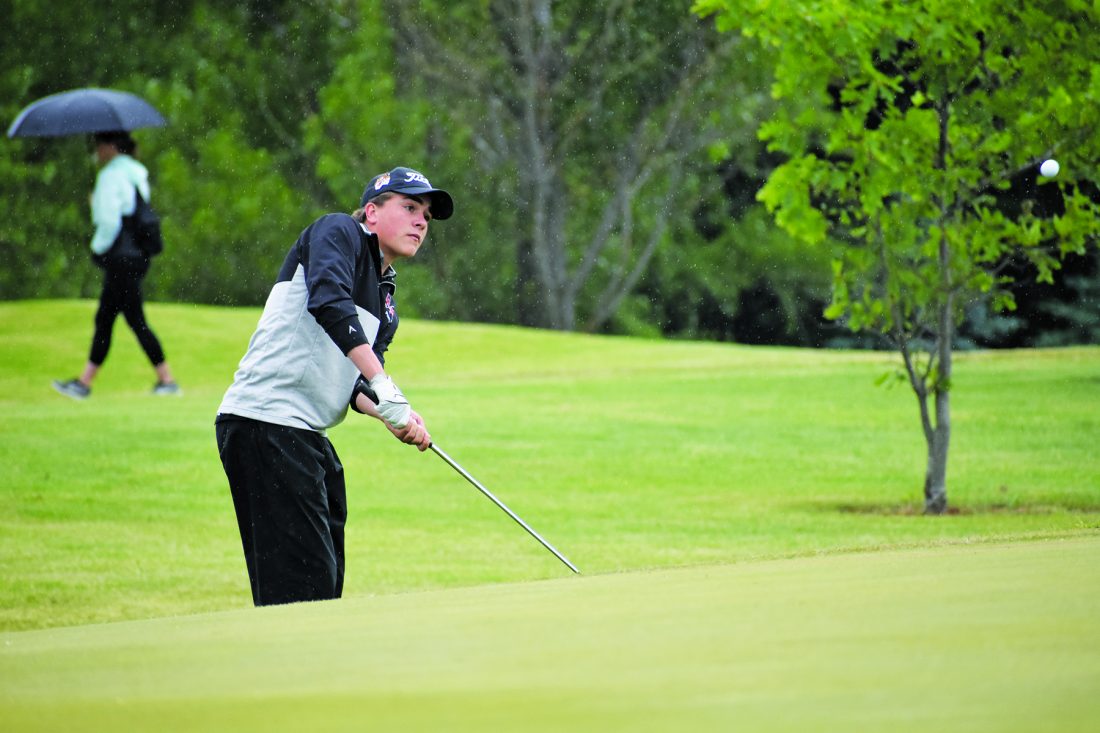 Photo by Sam Thiel Marshall’s Mason Plante watches a chip shot during the Class AA Championships on Tuesday at Ridges at Sand Creek in Jordan.

JORDAN – Playing in a state tournament can be a nerve-wracking experience for all of those involved, no matter what skill level you are.

Add in a rain-soaked day with some strong wind, and getting through your round of golf seems even more daunting.

In the case of the Marshall Tigers, they have some experience with both.

The Marshall boys and girls golf programs were well-represented on Tuesday, as seniors Mason Plante, Spencer Ehlers and Olivia Peterson as well as junior Rachel Schwarz got their opening rounds underway at the Class AA Tournament at Ridges at Sand Creek Golf Course in Jordan.

Plante and Ehlers got things started for the Tigers in the morning round. Plante saw himself get out to a strong start on the front nine, overcoming a double-bogey and a bogey by carding four birdies to take a 1-under score and a second-place position going into the turn.

Plante was able to record five pars on the back nine, but a double bogey and a couple of bogeys led to a 41 for a opening-day 76.

Plante said his approach shots with his irons, along with a strong putting performance on the front, was the biggest key for his round.

“Overall, I felt like I hit my irons better after that was my biggest downfall in the practice round,” Plante said. “I also seemed like I couldn’t miss a putt on the front nine and unfortunately, that only lasted nine holes because I didn’t putt as well on the back.”

Plante, who competed at state as an individual in 2017, said his biggest goal going into today’s final round is play with some consistency and put up a solid score on the back nine.

“I just want to play a similar game as I did (Tuesday),” Plante said. “I’m hoping to get the putter going well again and I’ll start on the back nine, so I want to shoot a strong number and get back to the front nine and do something similar what I did (Tuesday).”

Ehlers, the lone individual qualifier for Marshall a season ago, was able to get out to a quick start of his own with a birdie on the first hole. Despite running into some trouble on the fourth, Ehlers responded by playing even the rest of the way on the front to take a 3-over 39 going into the turn.

On the back nine, Ehlers would see a couple of up-and-down holes in the initial stretch, but once again came back with a solid end to his round by shooting 1-under the final five holes to help shoot a 79.

Ehlers said his key throughout his round was also striking the mid-distance clubs well and get a lot of greens in regulation.

“During my round, I thought I hit my irons well and was able to hit a lot of greens and it helped turn a bad round into a decent round, especially on the last five holes and getting a birdie on 18,” Ehlers said. “It’s fun to get some momentum like that going into the final round.”

Ehlers added that it was fun to have Plante nearby competing and said it’s a special thing to be able to wrap up their careers together at the state tournament.

“It’s definitely cool to see how we’ve grown up together and it’s a nice way to end our high school careers here at state,” Ehlers said. “But it’s more than just golf with Mason. Whether it’s hanging out together in the car or in the hotel room or playing video games, it’s a great feeling being such good friends and it’s special to be able to share this week at state with him.”

Marshall coach Kari Ehlers said she felt they did a good job of staying connected with the types of shots they needed to hit throughout the round and kept their energy level up late in the final holes.

“Going into (Tuesday), our goal was to have them shoot in the mid-70s and they are very capable of doing that. With the steady rain that we had and the wind that came in on the second nine, we were more connected to what kind of shots we needed to be hitting (for example, instead of hitting a high eight iron, we were going with a seven and punching it low),” coach Ehlers said. “Mason did a great job on the front 9 going up-and-down around the greens and stayed even-keeled mentally. As well as Mason, Spencer hit 13 greens and he played well despite having three double-bogeys, which can quickly add up your score. My assistant coach (Charlie Kost) and I have been preaching to them all season to finish their rounds strong because it’s common to fizzle out and be tired physically and mentally. The last four holes are really important, so we want to keep our energy up and grind it out to the very end.”

The two Tigers are scheduled to finish up their state tournaments in Jordan today. Ehlers will tee off at 7:57 a.m., followed by Plante at 8:06 a.m. on Hole 10

While the two Marshall boys players were walking up the 18th hole, the Tigers’ individuals on the girls side got their rounds started on the back nine, beginning with Schwarz. Unfortunately for Schwarz, a slow start to her round would be the makings of a tough outing for the junior despite recording four pars on the day.

Although the round didn’t go as planned, Schwarz remained upbeat about competing at state and sharing the experience with her teammate.

“It was some tough conditions to play in, but as always, state is such a fun atmosphere to be playing in,” Schwarz said. “The back nine was tough for me to find my groove, but the front nine I turned it around. I loved whenever there was a back-up on the holes so I could see Olivia.”

Peterson highlighted the final grouping of the day with a solid performance, as the senior fired a 2-over 38 on her first nine holes, including getting a birdie and five pars.

Peterson would have an back-and-forth front 9, collecting three more pars for a 42 and a first-day score of 80.

“Starting off with a birdie was a fun way to start my last high school tournament,” Peterson said. “I played steady golf throughout the whole round, which consisted of nothing worse than a bogey. State is always so much fun and I’m excited to finish my high school career strong tomorrow.”

“The first day of state is always a little harder with the pressure of playing at state and I expect to see both girls improve on play tomorrow,” Marshall girls golf coach Gretchen Flynn said.