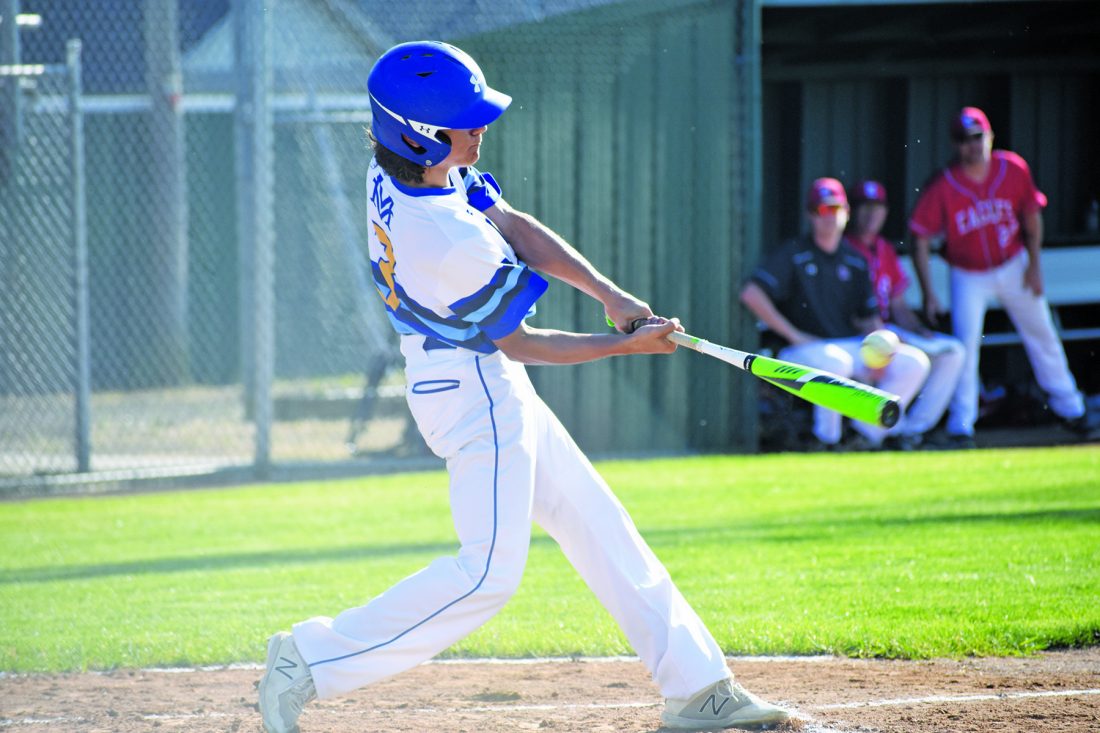 Photo by Sam Thiel Minneota’s Jaymes Moon follows through on a swing during their Section 3A tournament game against Lac qui Parle Valley on Wednesday. The Vikings fell to the Eagles 5-4.

GRANITE FALLS – After squaring off in the postseason just over a week ago, the Minneota and Lac qui Parle Valley baseball teams met once again, but this time with their seasons on the line. It was a back-and-forth battle, but the Eagles were able to hold off a push by the Vikings in the middle innings as LQPV slipped past Minneota with a 5-4 Section 3A tournament victory on Wednesday at Richter Field.

Minneota coach Keven Larson said they just weren’t able to get the big plays on offense when they needed to and LQPV was able to capitalize.

“We just didn’t get hits when we needed to and that was the big story,” Larson said. “When they had bases loaded, they got it done and you have to tip your cap to them.”

The Vikings jumped out to a quick start, as Thomas Hennen led off with a single before coming around to score on an RBI double by Landon Rolbiecki. On the ensuing at-bat, Jaymes Moon reached on an error to bring in a run and give Minneota a 2-0 lead.

That lead wouldn’t last long, however, as the Eagles used a walk and a pair of singles to load the bases with no outs. Minneota would get a forceout at home on the next batter, but an RBI groundout followed by a wild pitch brought in a couple of runs for LQPV and tied things up at 2-2 after the opening inning.

LQPV would add to its advantage in the bottom of the third, getting a couple of singles to put runners on the corners with no outs. The Vikings were able to prevent a run on a double steal by getting a LQPV baserunner out at home, but quickly loaded the bases back up on a walk and a hit batter. The Eagles capitalized with their patience at the plate, coaxing three consecutive walks with the bases loaded, bringing in three runs to push their lead to 5-2.

Minneota wouldn’t go down without a fight, though, as Austin Sorensen connected on a one-out single before advancing to second on a wild pitch. After Tate Walerius and Josh Laleman drew back-to-back walks to load the bases, AJ Myhre smacked a single that plated two runs to cut the deficit to one at 5-4.

Unfortunately for the Vikings, that was the closest they got, as Minneota went down in order the final three innings, and LQPV moved on to the Section 3A championship to face Kerkhoven-Murdock-Sunburg.

Rolbiecki and Myhre led the way for the Vikings with a hit apiece and combined for three RBI while Hennen, Sorensen, Sam Buysse and Ted Pesch each added a hit.

Larson said offensively, they did a good job of staying relaxed early on, but the Eagles’ pitchers were able to make the necessary adjustments throughout the game.

“We were just loose and relaxed early and just went out and had some good at-bats right away,” Larson said. “And then their pitchers just settled down a little bit and we couldn’t get anything going and maybe we tried to press a little too much later in the game.”

With the loss, Minneota ends its season with an overall record of 12-8 and graduates seven seniors, including Buysse, Rolbiecki, Moon, Pesch, Hennen, Laleman and Sorensen.

Larson said his senior class did a good job of setting a good example for their teammates and was proud of how they continued to play for each other.

“It’s been a great group to have; they’ve stuck together pretty much all the way through, that same group has played together and they’ve just set the bar pretty high for the groups to come,” Larson said. “That’s the good thing for them, the bad thing is it’s done and all in a matter of two hours everything’s done.”

Going into next season, Larson said their biggest takeaway from this year is that they were able to set the bar high for themselves and make a deep playoff run and hopes his returning players will use this year as motivation.

“Just that it’s possible and the bar is set pretty high, so the guys that are coming back and the younger guys saw that we can play deep into the section tournament and be successful and hopefully that continues,” Larson said.