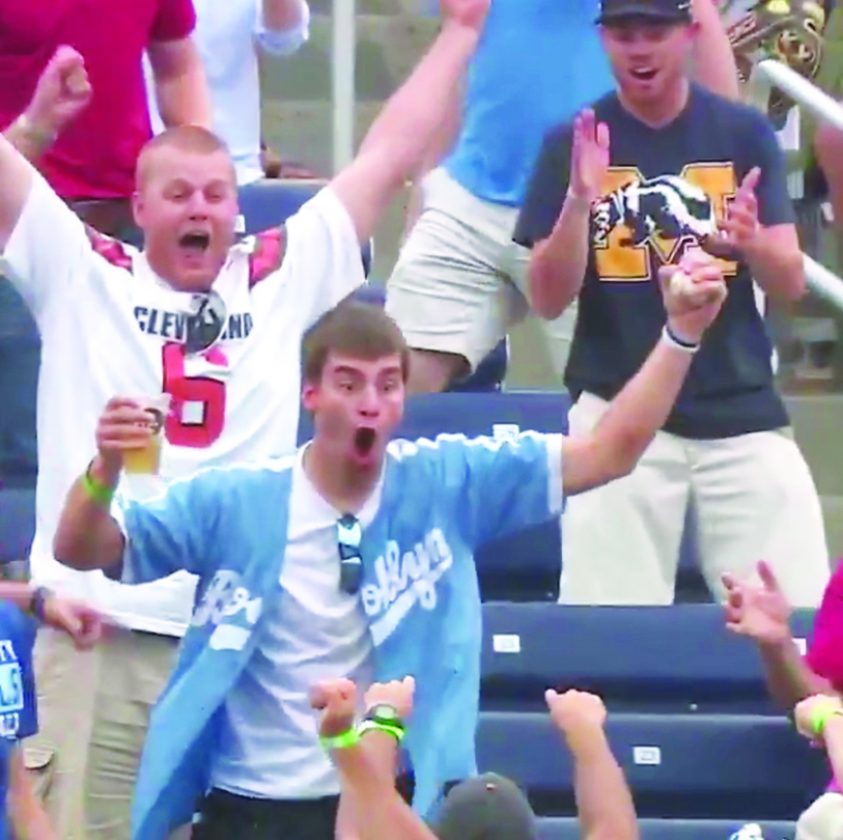 Screen capture ESPN/Twitter Minneota’s Austin Buysse reacts after catching a home run ball during the Texas Tech-Arkansas College World Series game last Monday. Buysse, who caught the ball while holding a beer in the other hand, became a social media sensation from the play.

MINNEOTA – Austin Buysse has had a history of being in positions that require making quick decisions and having sharp reflexes.

From leading the offense as a quarterback at Minneota High School and Dakota Wesleyan University to anchoring third base for the Minneota Mudhens amateur baseball team, the Minneota native has had to use laser focus and cat-like reflexes on a consistent basis.

One of those more recent quick decisions was put on display last Monday, when Buysse and some friends attended a College World Series game down in Omaha, Neb.. Little did they know that day Buysse’s life was going to change forever.

Buysse became an overnight social media sensation when he made a one-handed snag of a home run ball during the Texas Tech-Arkansas elimination game, all while holding a cup of beer in the other hand. He then chugged the beer and spiked the cup onto the ground as fans around him cheered him on.

“It’s been crazy. I can’t believe it, I don’t even have words for it, it’s been really surreal,” Buysse said. “We were just having a fun time and quickly all of a sudden that happened.”

Buysse said the plan to attend the College World Series was a kind of a spur-of-the-moment decision after his friends asked if anyone wanted to go with them.

“It kind of was,” Buysse said. “Tyson (Sonnenburg) texted the group saying if anyone wants to go down to Omaha, we’re going, so we had a week in advance and I asked to get off of work and we did and we went down there on Monday morning.”

Another impromptu decision they made was to sit out in the left-field bleachers, so they could see the Jumbotron at TD Ameritrade Park, according to Buysse.

“We got general admission tickets, and that whole outfield is kind of first come, first serve and they have a Jumbotron out in right field, so we said, ‘Let’s just sit out in left field so we can see that screen,'” Buysse said. “We grabbed a couple of beers and went down to the closest spot we could.”

A few innings later, Buysse’s reflexes and decision-making skills were put to the test. In the bottom of the fourth, Red Raiders first baseman Cameron Warren would connect on the first pitch and send a ball deep towards the left field bleachers.

Buysse said he didn’t see the play unfold in front of him, but just heard the ball hit the bat and then saw something heading his way. His initial instinct was to of course, make a play at it.

“I didn’t even see the guy swing the bat. Zach (Nuy) and I were talking to a couple of people that we met behind us from Arkansas and all of a sudden, we heard the ting of the bat and I kind of looked up and it was in the air,” Buysse said. “It started to come in our direction and I thought, ‘I’ve got to catch this.’ I stepped over the row in front of me and I don’t know what happened after that, the ball basically just found my left hand.”

Catching a foul or home run ball with your bare hand is difficult enough. In fact, the odds are roughly around 1 in 580. Throw holding a full cup of beer in your other hand into the equation, and it becomes an even greater odds-defying feat.

While Buysse said his hand didn’t hurt after the catch, it may have gotten a little tired after high-fiving and shaking hands with the tens of fans afterwards.

After the game, Buysse said they went to a bar downtown where they were met by even more fans who had seen the play on TV. Later that night, the video of Buysse’s catch was tweeted out by ESPN, NCAA baseball and more, earning nearly 12,500 retweets and 85,000 likes and 4.6 million views on ESPN’s tweet. It also was featured as Scott Van Pelt’s “Best Thing I Saw Today” during his show on SportsCenter.

Buysse said he didn’t think the video was going to gain as much traction as it did, but was surprised and amazed when it was getting national attention.

“It’s surreal because I watch that every day and I watch SportsCenter all of the time and to be on it like that is amazing,” Buysse said. “I didn’t really at first think anything of it or that it was going to blow up that much and then ESPN posted it late at night, we were just hanging out in downtown Omaha and we saw it and that’s when we knew it was going to blow up for sure.”

Now, Buysse has had a little more than a week to settle back into his daily lifestyle. While the thrill of making the catch certainly ranks high on his list, Buysse said the best part of the whole experience is that he got to share it with his friends and create a memory that will last forever.

As for what’s up his sleeve next year, Buysse said he doesn’t know if he can improve on it, but knows they’re already going back, perhaps to the same spot.

“I don’t know how I’m ever going to top it, honestly,” Buysse said. “But we’re going next year for sure, that’s a promise.”