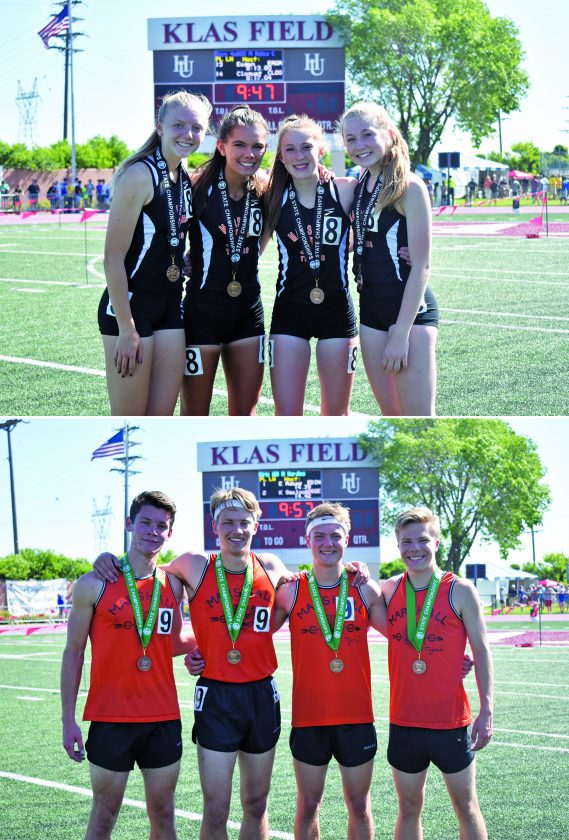 ST. PAUL – For the Marshall boys and girls 4×800-meter relay teams, they wanted to wrap up their seasons – and for some, their careers – by running hard and competing for each other and giving it their absolute all until the last runner

Both Tiger relays pushed themselves to the limit and as a result, came away with finishing within the Top 8 best teams in the state at the final day of the Class AA track and field championships on Saturday at Hamline University.

The Tiger girls relay team got things started in a solid direction, as senior Kaia Sueker, freshman Bellamy Sukalski and juniors Kate Bucher and Natalee Sample lowered their section time by roughly five seconds with a run of 9:29.26 to place eighth. Minnetonka took first with a time of 9:20.54, followed by White Bear Lake Area in second (9:22.87) and Alexandria in third at 9:23.91.

For Marshall, the 4×800 is not new. The Tigers came to the state meet with some experience, as they have competed in the event seven of the past eight years.

After Sueker set the tone as the leadoff runner, Sukalski and Bucher anchored the second and third legs of the race, respectively. After watching their teammates run this event the past few years, they were more than ready to go out and compete themselves.

“For Kate and I, it’s our first time running in the state meet, so we were excited to come with our team and fight for each other,” Sukalski said. “It’s never just about one of us, it’s about all of us just working together and knowing that we will all fight for each other and the team.”

Sample took it down the home stretch for Marshall, and said the early race nerves went away while she was cheered in by her teammates.

“Once you are confident in your teammates and confident in yourself, it definitely takes away a little bit of those nerves and we just bond together for each race and each lap,” Sample said. “I could hear them cheering the whole time which is super cool.”

As the lone senior, Sueker said it was a special moment to wrap up her career with a great group of girls by her side and earn a medal with them.

“It’s really special,” Sueker said. “I’m just glad to be up here with these girls and I know that we gave it our all for each other and had a great time just pushing hard. It was really fun.”

After watching their teammates open the day with a medal, the Tiger boys relay team wanted to share a similar experience. Marshall did just that, as sophomore Eli Salisbury, junior Zach Matzner and seniors Karter Wasberg and Quentin Blomme shattered their section time by about nine seconds with a run of 7:54.16 to come in fifth place. Wayzata took first with a time of 7:50.59, followed by Edina (7:53.21), Rosemount (7:53.46) and St. Michael-Albertville in fourth (7:53.82).

Sophomore Eli Salisbury said it was great to be able to represent Marshall among some of the top teams in the state.

“I feel like it’s great to be such a small school and then being able to come and compete against these schools that are double our size,” Salisbury said.

Blomme added it’s something they’ve been thinking about since their early days in a Tigers uniform.

“This is just something we’ve all been dreaming about since we were in the seventh grade when we first started running,” Blomme said. “To finally make it, especially since it’s Karter and I’s senior year, it’s special.”

Wasberg said being able to wrap up his career with some hardware is a great feeling and is proud of the way they trusted each other in working to achieve their goals.

“It feels really aweswome,” Wasberg said. “I didn’t think we were going to get this far this year. But we just believed in each other and we got here.”

One of the goals the team had set early in the year was to break the eight-minute mark. Meet by meet, they lowered their times until they saw their final time flash across the screen on Saturday with a time they never thought they would reach.

“It’s almost unbelieveable,” Matzner said. “At the beginning of the season when we ran an 8:07 or so, we were all freaking out because of that and we just beat that time by 13 seconds so it’s crazy.”