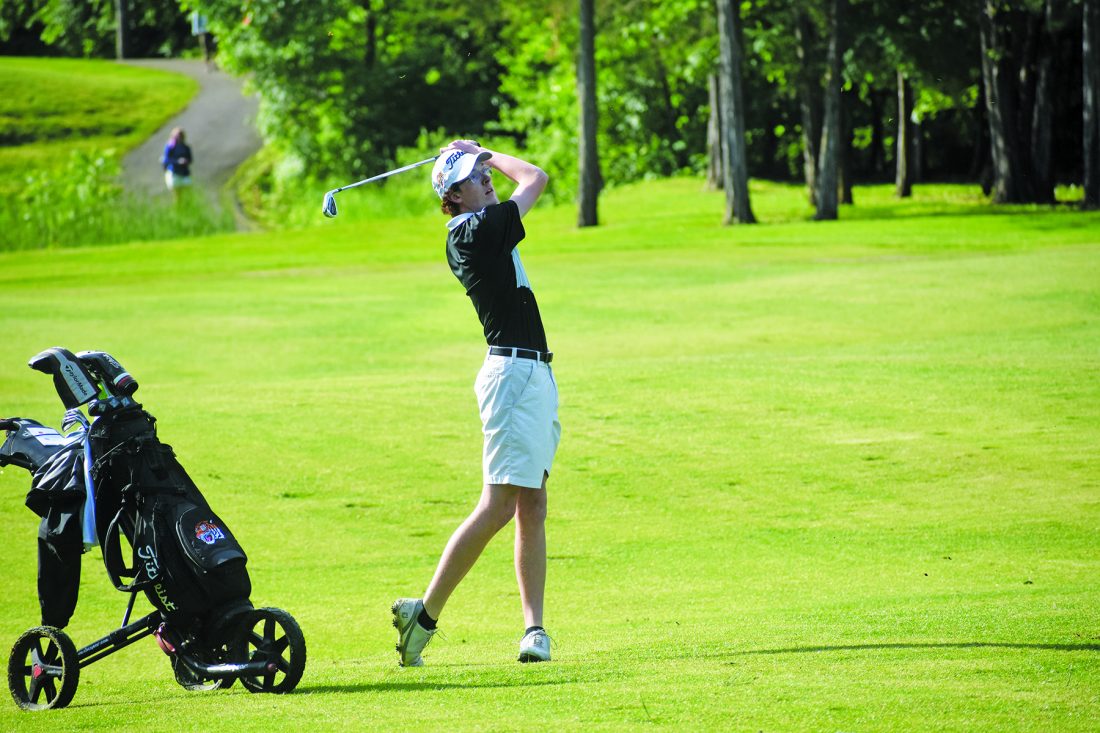 Photo by Sam Thiel Marshall’s Spencer Ehlers hits an approach shot during the Class AA tournament on Wednesday at Ridges at Sand Creek in Jordan.

JORDAN — As they walked up the final hole at the Class AA Tournament, Marshall’s Spencer Ehlers, Mason Plante, Olivia Peterson and Rachel Schwarz all felt a wide range of emotions. For Ehlers, Plante and Peterson in particular, it was bittersweet as well as appreciation for the sacrifices made by those around them in order to have the success they did as members of the Tigers.

All four Marshall golfers finished within the Top 32 on Wednesday at Ridges at Sand Creek.

Plante and Ehlers have been battling each other since their junior high days on the Tigers golf team. It only seemed fitting that they ended their prep careers where they started: side-by-side on the final scorecard.

Ehlers said it was an ironic but special end to their careers to finish with the same score and added they both felt satisfied overall with where they ended up.

“It’s pretty ironic that we tied just because all of that we’ve been through together it’s funny to see that we ended up even,” Ehlers said. “I think although we might not have shot the scores that we wanted to, we’re both pretty satisfied with the two-day total, especially with the rain yesterday and the wind and heat (Wednesday).”

Beginning on the back 9, Plante had a couple of up-and-down holes early in his round before approaching the par-5 16th, where after hitting an approach shot into the greenside bunker, Plante stepped up and blasted an on-target shot that worked its way into the cup for a birdie to highlight his first nine holes.

Moving onto the front 9, Plante was able to get out to a more solid start, parring four of his first six holes before wrapping up his career with a pair of pars to close out with a 38 on the front and a 78 on the final day.

Plante said throughout his round, he did a good job of finding the fairway off the tee box and was able to battle his way through a tough short game.

“For me, I hit every tee shot and was comfortable off of the tee,” Plante said. “My driver, 3-wood all the way down to the par 3s; I struggled with chipping and putting a little bit, missed my six-footers again that I probably should’ve made but all in all, I thought I hit the ball as well as I did yesterday for the most part.”

Ehlers also started his day on the back, as he parred his first two holes before running into a string of bogeys. He then went 1-over in his final four holes on the back to come in with a 4-over 40 as well on the back.

Looking for a spark as he was making the turn, Ehlers kicked off his final nine holes in red-hot fashion, as he smacked a drive and an approach shot to within a few feet before draining an eagle putt on the par-5 first hole. Despite briefly dropping a couple of shots on a pair of holes midway through the front 9, the senior quickly regained his composure and was able to find his second eagle of the morning on the par-5 seventh.

He would then par the final two holes to close out with a 1-under 35 on the front and a 75 on the day.

“My back 9 was again pretty up-and-down, I had some good holes and some bad holes but when I made the turn and got back onto the front it was fun. I started off with an eagle on 1, then went into a little bogey stretch but then got to 7 and eagled that one too, so it was cool,” Ehlers said. “I’ve never had this happen where I’ve gotten two eagles in 18 holes nevertheless two of them in nine holes, so it was pretty crazy.”

Both Ehlers and Plante added they couldn’t have seen the success that they did without the necessary sacrifices and support from their teammates and coaches.

“Starting with coach Ehlers and then Charlie Kost, Charlie’s been there for three years now and he’s a very particular guy and knows a lot about the game of golf and your swing. And then having my mom as the coach has been awesome, she’s been there for both of us for all six years that we’ve been playing high school golf, so it’s just crazy,” Ehlers said. “I don’t think it’s set in yet how this is the end of it. And with our teammates, we tend to have a lot of competition within our team, which is good and hopefully they can learn from what happened this year and they can make it back here next year because none of them have been here and it’s a really awesome experience and I think they would all enjoy it.”

Marshall coach Kari Ehlers said a lot went through her mind as she watched Plante and her son walk up No. 18, and is extremely proud of how they’ve grown and matured together both on and off the course throughout their careers.

“A lot,” she said. “I would say more than the golf, just they’re such good friends, they’re just quality kids and when we go places, people like playing with them and it’s a tribute to them loving the game, being proud of our town, just wanting to make Marshall golf a really good program. I think I’m mostly proud of them just for being gentlemen, which is what I try and emphasize the most during the season. Good golf or bad golf, you play with class and I really have enjoyed seeing them mature into fine young men.”

Ehlers said he’s going to miss the community of Marshall the most and how strong of a support system they had each day.

“I think the thing I’ll miss the most are the people here. Being a smaller community, you seem to know everyone so it’s crazy how many people factor into the decisions you make and there’s always someone congratulating you or wishing you good luck,” Ehlers said. “For both of us for the past week, we’ve had countless people come up to us and congratulate us and wish us luck for this week, so definitely the people.”

Plante added he’ll miss the people around town as well the coaches that helped shape him into the person he is today.

“I would mostly say the people but also probably all of my coaches throughout hockey and golf,” Plante said. “They’ve all influenced me as a person in so many ways.”

As Ehlers and Plante were finishing up their rounds, Peterson and junior Rachel Schwarz were getting their final rounds underway on the front 9. Schwarz led things off with a back-and-forth opening first nine holes, overcoming a pair of crooked numbers with a birdie and two pars to shoot a 47 going into the turn. During Tuesday’s opening round, Schwarz would struggle on the back 9 with a first-day 50, but the junior was able to gain some early momentum and never look back, firing a red-hot 39 on Day 2 to help shave seven strokes from her first-round total. She finished with an 86 for a two-day total of 179 and a tie for 32nd place.

Schwarz said her short game, along with some strong tee shots, were the key to her turnaround performance on Wednesday.

“I figured out how to chip again, so that was good and it helped me especially if the pin placements were tough because they were even worse (Wednesday) than yesterday,” Schwarz said. “All of my tee shots would put me in a good place to score, except on one of the holes, so I was very happy with that.”

Marshall coach Gretchen Flynn said it was bittersweet to watch Peterson wrap up her career but is proud of what she was able to accomplish and was also excited to see Schwarz put together a strong finish to her season and create some momentum going into next year.

“For Olivia being a senior, it was a little bittersweet, I’ve known her since she was a toddler, so I’ve watched her grow up through the game of golf and she struggled a little bit on the back 9 but she put up two solid days of golf and I’m really proud of what she’s done,” Flynn said. “For Rachel, she really turned it around well (Wednesday) and it was just nice to see the growth and knowing that she’s got the potential to put those low scores up there and hope to see that from her next year.”

As she walked up her final hole of the day, Peterson said she was just grateful for a lot of things and didn’t really feel any nerves.

“Surprisingly, I wasn’t feeling nervous,” she said. “I guess I was just feeling very thankful and happy with where I was and how I ended my high school career and just thankful for all of the teammates and friends and family that came to watch me and just having a great end to my season.”

Peterson capped off her prep career with another consistent display of scoring, shaking off a double bogey on the first hole with eight consecutive pars for a 2-over 38 on the front 9 before battling a few bogeys on the back to card a 43 for a final-round 81 for a two-day total of 161.

The senior also set some program history in the process, as her 10th place finish placed her as the top finisher in Marshall girls golf history for a 36-hole state tournament. She also shot the third-lowest two-day total behind Hanna Peterson in 2016 (159) and Kaylee Gossen in 2018 (160).

Peterson said she was able to putt the ball better throughout her final round.

“I was able to putt a lot better,” Peterson said. “Yesterday, I putted fine but (Wednesday) was better and I was able to make up for shots that I messed up in the fairway and chip it close and then make the putt, so that was definitely something that changed from yesterday to (Wednesday).”

Peterson added her teammates and coaches have had a tremendous impact on her throughout her career and she has a lot of great memories with them.

“It’s been a great ride; obviously Rachel’s one of my best friends and it’s been to have this state experience with her and last year it was super fun to come with the team and end up placing second,” Peterson said. “Ashtyn (Eben) and Courtney (Toulouse), two of my fellow seniors, they were super fun to grow closer with throughout the years and have as friends and teammates. The coaches, I’m just thankful for all of the work they’ve put in and how much they’ve invested in us throughout the years.”

Peterson said she’s going to miss the people she’s gotten to know over the years but is also excited for the next chapter.

“Probably the people the most, just because I’ve grown close with a lot of these girls and I’ve gained some of my best friends through golf,” Peterson said. “I’m really excited though as I go on to St. Cloud State to meet new people, make new friends and have a new experience.”