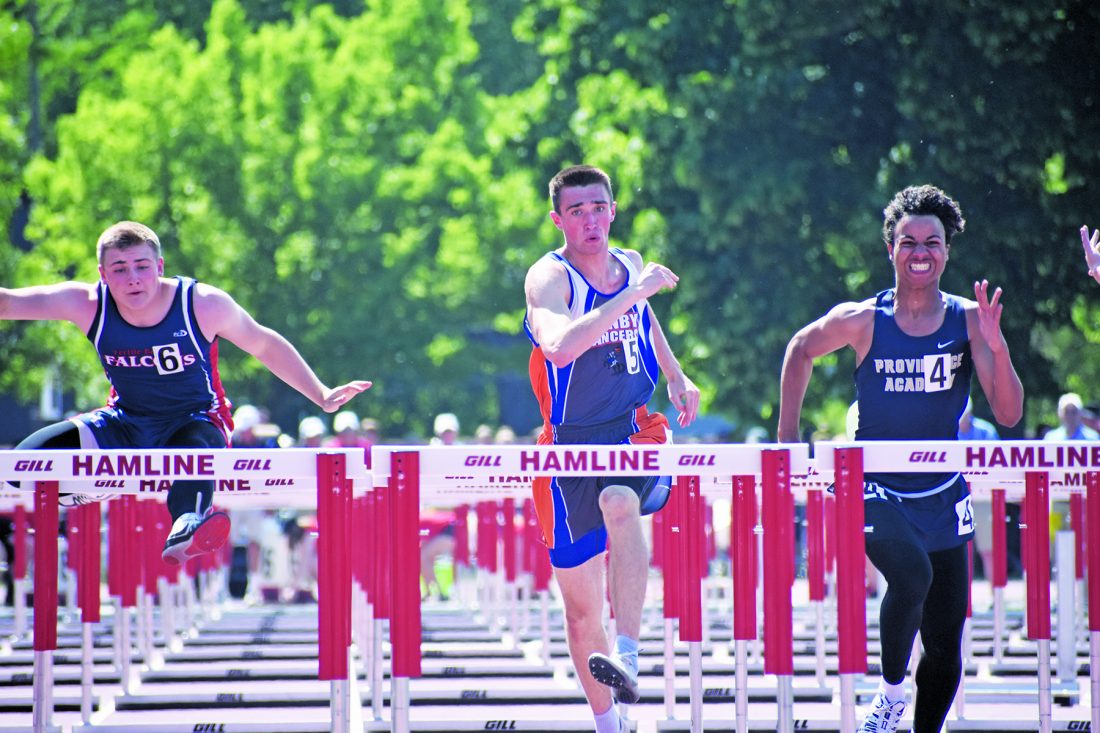 Photo by Sam Thiel Canby/Minneota's Carter Wente, left, looks to clear a hurdle during the Class A Championships on Friday at Hamline University.

ST. PAUL — The opening day of the Class A track and field championships saw solid times and marks, some hardware to wrap up a career and new experiences from multiple area teams and individuals on Friday at Hamline University.

The Canby/Minneota team had a pair of relay teams and individuals compete on Friday afternoon, with Carter Wente participating in the 110-meter hurdles and Grace Drietz running in the 800 meters while the 4×200 boys and 4×400 girls relay teams also took part in state competitions.

Wente was able to place fifth in his individual event, running the hurdles in 15.43 seconds to stamp his ticket into the final day. The senior said he didn’t get out to the best start, but was able to recover well and finish with a strong time.

“I kind of had a rough start, at the first hurdle, I smoked my knee into it so it’s a little swollen, but I got it figured out and got the job done,” Wente said.

He added that he’s going to rest up and get ready to go for the final heat.

“My knee should be healed up and I should be ready to go to contend for first,” Wente said.

Drietz was also able to find herself making the second day of competition, as the freshman ran the 800 in 2:16.91 to place fifth in the prelims. She will also have another chance to earn some hardware in the 1,600 meters today.

The relay teams were able to put up some strong times, but weren’t able to qualify for the final round. The boys 4×200 team of Cole VanOverbeke, Jaden Kindopp, Jared Josephson and Wente placed 11th with a time of 1:32.56 while the girls 4×400 team of Drietz, Lizzy Gillingham, Braelyn Merritt and RyAnn Hansen placed 10th with a time of 4:04.19.

The Lac qui Parle Valley/Dawson-Boyd team had multiple individuals compete throughout the day, beginning with Avery Bartunek in the long jump and Josie Munsterman in the high jump. Bartunek would place 14th with a jump of 15-10 while Munsterman placed 19th with a jump of 4-10. On the boys side, Zeke Sather and Mike Kvaal participated in the 3,200 meters, with Kvaal placing 11th with a time of 10:04.04 and Sather coming in just after with a time of 10:04.72. Both Sather and Kvaal will compete in the 1,600 meters today.

The Rebels had just one competitor on the track on Friday, as junior Aaron Johnson participated in the 110-meter hurdles. Johnson would place ninth with a time of 15.84 seconds, but was able to qualify for the final heat with his time.

The Rabbits also had a lone participant, this time in the shot put where senior Carl Swedzinski looked to close out his career with a medal. Swedzinski said it was a great feeling to have an opportunity to come away with some hardware.

“It feels amazing,” Swedzinski said. “I’ve put in a lot of time here and there are a lot of people that have helped me along the way and I feel like this is a good way to end it.”

With a throw of 49-01.50, Swedzinski was able to work his way onto the podium with a ninth-place finish.

“I felt pretty comfortable, the nerves didn’t get to me, so I felt relaxed and I think that helped a lot,” he said.

Swedzinski’s track and field days aren’t over just yet, though, as he is planning on attending Southwest Minnesota State University in the fall to compete in track and field. Swedzinksi said his biggest takeaway is to continue to not let a bad throw or meet get him down and keep working towards his goals.

“Keep lifting and if you’re in a bad spot, don’t get your head down because anything’s possible,” Swedzinski said.

The Lakeview team was represented by discus thrower Kaitlynn Bot, who was making her first trek up to the state meet as a sophomore.

Bot said it was nerve-wracking when she stepped into the throwing circle at first, but then she was able to calm herself down and compete.

“I was really anxious and nervous at first but then I kind of relaxed a little bit,” Bot said.

Bot would unfortunately scratch on her throws, but knows she can take some positives away from the experience.

“I just need to relax and not let things get to me and keep my routines the same and continue to trust my coaches and what they say,” she said.

The final day of Class A competition begins today at 3:30 p.m.