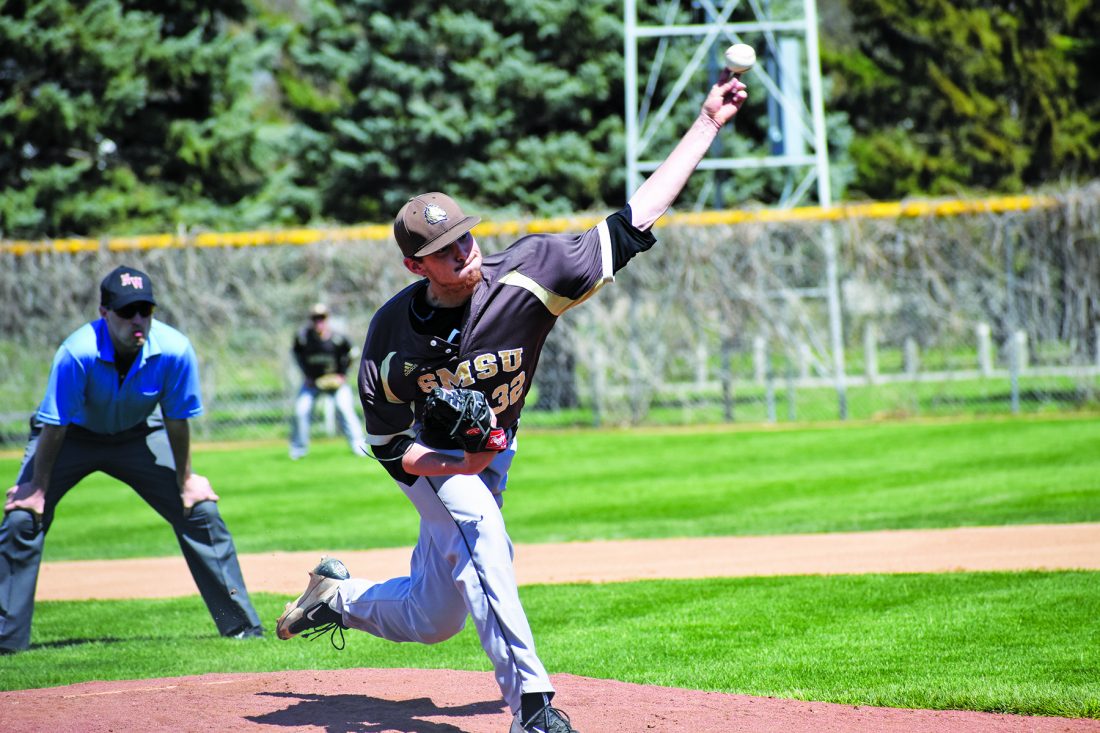 Photo by Sam Thiel SMSU’s Teddy Broxterman delivers a pitch during a game against St. Cloud State University on Saturday.

SCSU, ranked No. 10 and 14 in two national polls, won the completion of Friday’s suspended game 18-6 on Saturday morning, before SMSU earned a thrilling 5-3 win in Game 1 of Saturday’s doubleheader before losing another close game, 5-4 in Game 2.

The victory for SMSU snapped a 13-game losing streak for SMSU versus SCSU, earning its first win since the 2015 season. The one-run loss in the final game today was SMSU’s eighth one-run setback of the 2019 season.

SMSU ends the season 11-27 overall, 10-23 NSIC, while SCSU, which finished third in the NSIC standings and improves to 38-10 overall, 26-8 NSIC. SCSU is also ranked No. 3 in this week’s NCAA Central Region rankings.

The day started with the completion of Friday’s suspended game which was stopped with SCSU leading 12-1 in the fifth inning. SCSU jumped on the board early one pushing across five runs in the top of the first, highlighted by a grand slam by Toran Shahidi, to build an early advantage.

The Huskies added to the lead in the second behind a two-run homer from Matt Meyer to extend the lead to 7-0.

SMSU scored its first run of the game in the bottom of the second as Tanner Strommen and Jake Hendricks singled to open the frame before Derek Smith hit a sac fly to score Strommen.

SCSU belted another two-run homer in the fourth to take a 9-1 lead after four innings and then added four more runs in the fifth to build the lead to 13-1 after play resumed.

Ben Heichel belted a two-run homer for SMSU in the fifth to cut the deficit to 13-3 after five innings.

SCSU hit another two-run shot in the sixth to make the score 15-3, but Jake Hendricks answered with a solo homer in the bottom half to cut the lead to 15-4.

In the bottom of the seventh, SMSU pushed across two runs, but the highlight of the frame was a pinch-hit home run to lead-off the frame by Logan Funk in his first collegiate at bat. Strommen knocked in the final run of the inning with an infield RBI single.

John Bezdicek (2-4), who had allowed just one home run all season and four in his career entering the game, had three long-balls hit against him and allowed nine runs on eight hits with four walks and two strikeouts.

Hendricks, Strommen and Brady Lanoue each had two of SMSU’s 11 hits. SCSU finished the game with 17 hits including five home runs.

In the first game of the scheduled doubleheader on Saturday, SCSU pushed across a run in the top of the first on a sac fly by Jordan Joseph.

SMSU took its first lead of the game in the bottom of the first as Andy Andresen singled and later scored on a two-out, two-run home run by Fleck, his sixth homer of the season.

The lead didn’t last long as the Huskies scored an unearned run on a failed pick-off attempt to tie the game at 2-2.

SMSU regained the lead in the bottom half of the second scoring a pair of runs on three hits. With one out, Matt Bezdicek was hit by a pitch and moved to second on a single by Spencer Rudnik. Kip Gronholz then gave the Mustangs the lead ripping an RBI single up the middle. Following an infield hit by Andresen to load the bases, Nathan Kuhn lofted a sac fly to right field to score Rudnik and give SMSU a 4-2 cushion.

SMSU senior starting pitcher Cole Petersen fired two scoreless innings in the third and fourth, but SCSU was able to cut into the deficit in the fifth by taking advantage of two walks and a hit by pitch. Petersen was relieved with the bases loaded and two outs by Alex Jorgensen with SMSU holding a 4-2 lead. Jorgensen, a senior, walked the first batter he faced on four pitches to plate a run, but he struck out the final batter to keep SMSU in the lead at 4-3.

SMSU picked up a big insurance run in the sixth as Strommen stroked a double off the right-center fence to start the rally. After pinch-runner Christopher Berg moved to second on a ground out, Derek Smith stroke a clutch single to center field to give SMSU a 5-3 advantage.

Petersen (2-7), in his final Mustang appearance, tossed 4 2/3 innings, allowing three runs (two earned) on five hits with four walks and three strikeouts to pick up the victory. Jorgensen picked up his first save of the season tossing 2 1/3 hitless innings recording two strikeouts and walking two.

Andresen finished 3 for 4 with a run scored to help the SMSU offense which finished with eight hits. It was just the third time in 23 games SCSU has allowed five or more runs in a game.

SCSU was limited to five hits in the SMSU victory.

In the final game of the series, the Huskies took advantage of a Mustang fielder error and added three hits to score two unearned runs in the top of the first inning. SCSU added another run on three more hits in the second to build a 3-0 lead.

SMSU answered back in the third as Lanoue was hit by a pitch, Strommen singled and Heichel reached on a bunt single to load the bases. Kuhn then worked an 11-pitch walk to score the first run. Following a strikeout and a foul out, Andresen walked to force in another run. Johnson then put SMSU in front ripping a two-run single to make the score 4-3.

SMSU maintained the lead until Shahidi led-off the fifth inning with a solo home run knot the game at 4-4.

The Mustangs put a runner at second with two outs in the sixth and nearly regained the lead as Hendricks belted a long fly ball to the right field but was the ball was caught at the base of the fence to end the inning.

SCSU went back in front in the seventh starting the rally with a single, a hit by batter and a wild pitch to put runners in scoring position. James Hardy, who relieved starter Teddy Broxterman, following the single, allowed a single by Dylan Haskamp to put the Huskies in front 5-4. Jeremy Stouffer came on in relief and kept the game a one-run affair as he retired all three batters he faced.

SMSU had one last chance in the seventh as Andresen singled with one out and advanced to second on a ground out. The game ended however as Fleck flied out to right to seal the Huskies victory.

Broxterman (0-3) was outstanding in his first collegiate start as he tossed a career-high six-plus innings with a career-high five strikeouts. He allowed five runs (three earned) on 10 hits while walking one batter.

SMSU was limited to five hits in the nightcap with Andresen, Johnson, Strommen, Heichel and Hendricks each collecting one.