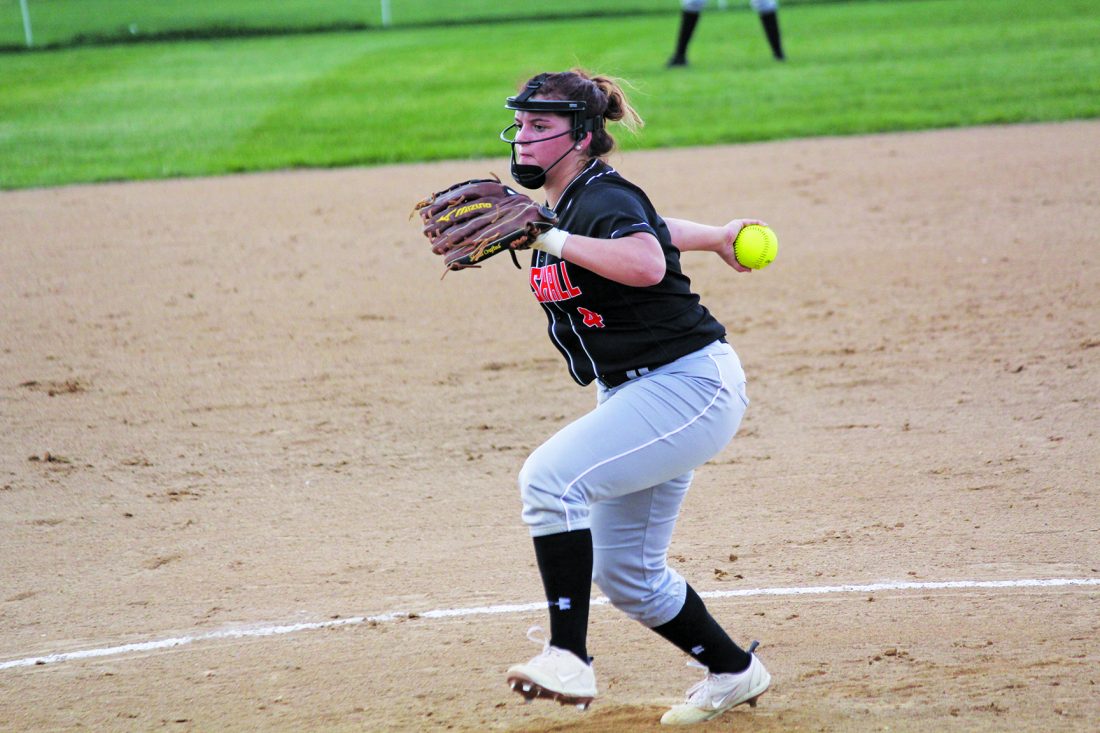 Photo by Jake Przytarski Marshall’s Madison Wegner winds up a pitch during their doubleheader against Blue Earth Area on Tuesday.

MARSHALL – It would be difficult to envision a better way to end your final regular season start as a senior pitcher than to go out with a no-hitter. For Marshall’s Madison Wegner, the dream finish was her reality, as she went all five innings in the circle without giving up a single hit in an 11-0 victory over Blue Earth Area in Tuesday’s doubleheader opener.

According to Wegner, the realization that she had accomplished the rare feat didn’t come until after she heard her dad cheering in the crowd after collecting the final out.

“I didnt realize until after the game and my dad started cheering and I was really confused,” said Wegner.

Now that reality has set in, she was quick to put the accomplishment at the very top of her list of softball accolades.

“I feel accomplished now. I’ve obviously gotten awards as I’ve gone on but this one just tops everything,” said Wegner.

Though the Tigers would go on to lose the final game of the doubleheader by a final score of 6-1, Marshall coach Jack Houseman came away proud not only for their effort on Tuesday but for the last two weeks in which they’ve left it all on the field against strong opponents.

“We fought hard over the last two weeks in our games there so I was proud of the girls for playing through a tough schedule,” said Houseman. “They did a good job sticking with the teams and playing hard each night.”

After Wegner delivered her first of five hitless frames to open the contest, the Tigers pounced on the Buccaneers in the latter half of the inning with a four-run surge that came as a result of three fielding errors and alert base running. Along the way, Jamie Timmerman and Leah Schaefer each picked up RBIs with bases-loaded walks.

In the second inning, Marshall registered its first of five hits when Shelby Versaevel reached base with a single, and was later waved home thanks to another error in the field by Blue Earth Area that made it 5-0.

The Tigers all but put the game away with a six-run third inning that began with a pair of leadoff singles for Wegner and Aubrey Bjella, followed by a walk for Brenna Springborg to load the bases with no outs. Lenei Estrada, Paige Andries and Abby Wendorff each stepped to the plate and delivered consecutive run-scoring hits for the club followed by a sacrifice fly for Versaevel that made it 10-0. A passed ball scored the team’s final run that made it 11-0.

In need of some run-support to prevent the game from ending, the Buccaneers gave it one last shot in the top of the fifth inning but were shutdown once more to secure the Tigers 11-0 victory and the no-hitter for Wegner.

Marshall’s string of strong pitching performances continued in game two with Kayla Polejewski providing the team with a pair of scoreless innings to begin the game. Equal to the task, the Buccaneers starter was also sharp in the circle and held the Tigers to a single hit with no runs on the board.

The deadlocked score was broken in the top of the third when Estrada reached first via a Buccaneers fielding error and eventually scored on a sacrifice fly by Wendorff to give Marshall its only run of the contest.

Unfortunately, Blue Earth Area battled back to knot the game up at one apiece before a three-run fourth inning gave them the lead at 4-1. Two of the three runs came as a result of errors by Marshall.

After four complete innings for Polejewski, Wegner stepped in to close out the game but was unable to slow down the Buccaneers offense as they went on to drive in two more runs in the fifth in a 6-1 final.

With the regular season complete, the Tigers will now wait to find out their sectional seed and who they will be matched up with in the first round. Houseman hopes to get the team as ready as they can possibly be for the postseason in upcoming practices.