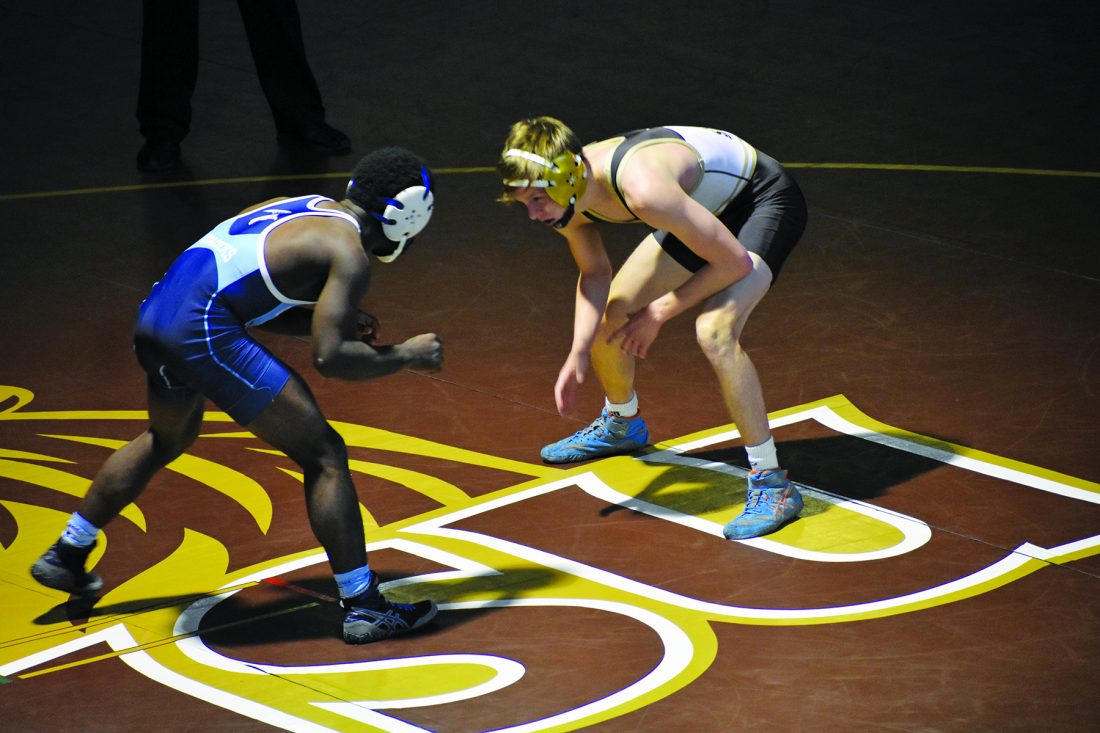 Independent file photo SMSU’s Ben Emrich sizes up his opponent during their meet against Upper Iowa University on Jan. 18. The Mustangs will close out the regular season this weekend against the University of Mary and Minot State University.

SMSU won its first dual of the season with a 24-16 win over MSU Moorhead last Friday night in the PE Gym. SMSU won six of the ten bouts and even forfeited at 125.

Cole Hennen started the night with a 3-1 decision victory at 197 for his second consecutive conference victory to maintain a 2-4 conference record.

Brock Buysse and Griffin Osing each earned first conference victories this season, Buysse, at 133 with a 2-1 decision win over MSUM’s Seth Hutchison and Osing, at 184, a 5-4 win over MSUM’s Evan Foster.

Cortez Arredondo followed up with a 10-9 decision victory over Braydon Ortloff at 157. The bout finished locked at 9-9 but Arredondo claimed the win after the addition of riding time.

Arredondo moved up to No. 7 in the latest NWCA poll released on Monday.

UMary is 4-4 overall and 2-4 in the conference and was ranked No. 20 in the latest NWCA poll released on Monday. Two Marauders were ranked in the top-12, with Tate Barnhardt (133) ranked No. 3 and Phillip Springsteen (174) ranked No. 8. Barnhart is 8-0 this season and went 2-0 last weekend against other nationally-ranked opponents. Springsteen is a redshirt sophomore with a 10-2 record against DII opponents.

SMSU leads the all-time series 7-1 and has won the last six duals. The series started in the 1970-71 season and played for two consecutive years until starting again in the 2012-13 season. SMSU won the meeting last season 23-17 and is 4-1 at Minot.