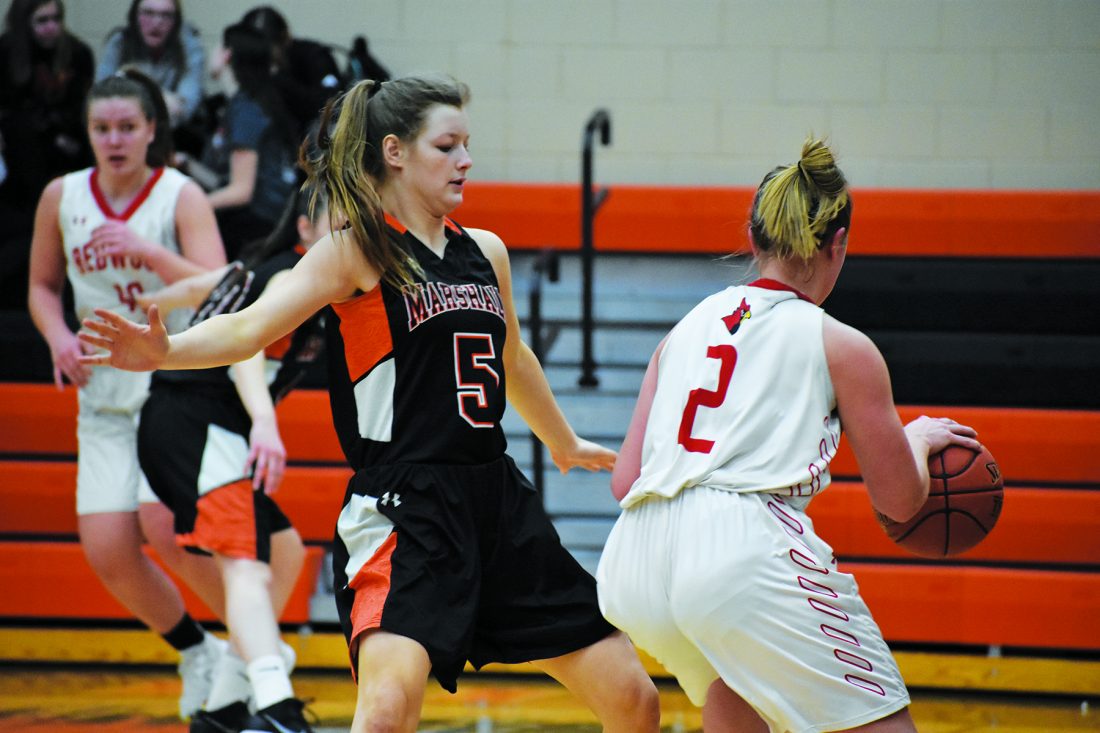 MARSHALL – The Marshall girls basketball team used another balanced scoring night to earn a key conference victory over Redwood Valley on Monday night. But in order to find that success on offense, Marshall knew it had to bring the intensity on defense.

For the third consecutive game, the Tiger defense stood their ground, holding the Cardinals to just 33 percent shooting (15 of 46) from the field while also forcing 23 turnovers as Marshall rolled to an 81-44 win.

Marshall coach Dan Westby felt his team did a good job of creating tough passing lanes and taking away the Cardinals’ presence in the paint throughout the night.

“They’ve got a couple of very good players; Haley Garman is tough to deal with inside and I thought our kids really did a nice job defensively of at least knocking some balls away,” Westby said. “But again, she’s a good player and then I thought Sydney Sommers did a number of good things going to the basket and we kind of took that away. They’re a good team and I thought it was a good defensive effort by our kids.”

It was tight to start, as the Tigers held a slim 6-4 lead before the Cardinals tied things back at 11-11. Marshall’s offense then started to get into a groove over the next few possessions, as Jordyn Hilgemann got a 3-point play to go before back-to-back 3-pointers from Kaia Sueker and Abby Wendorff highlighted a 9-0 run to push the Tigers’ lead to 20-11.

Westby said their key on offense was opening the spacing on the floor and finding the open player as well as their ability to attack the basket.

“They played a lot of man-to-man and I thought our kids did a nice job of slipping some screens and finding the open player and we were able to finish some shots inside,” Westby said.

After Marshall took its first double-digit advantage of the night, the Cardinals slowly worked their deficit back to single digits midway through the first half. The Tigers quickly answered, though, this time using stifling defensive play to force multiple Cardinal turnovers. On the other end, Marshall continued to capitalize, building its lead to as large as 18, but once again Redwood Valley had an answer.

The Cardinals would connect on a string of baskets to draw to within 14, but a pair of free throws from Erica Jones gave the Tigers a 42-26 lead going into the locker rooms.

Marshall looked to carry over its momentum from the opening half and immediately saw its defensive pressure continue to set the tone of the game. The Tigers held the Cardinals without a field goal for the first six minutes of the second half, as Redwood Valley managed only one point in the time span. Marshall’s tenacity on the other end of the floor would show in its offensive trips down the floor, as the Tigers quickly built a 65-32 lead on a pair of 3-pointer from Lenei Estrada and Corrin Naughton midway through the half.

Westby said that initial stretch to begin halves is a key factor for how they want to dictate the pace of the game and felt they did that, especially from a defensive standpoint.

“That’s extremely important; we always think that the first five or six minutes of the game as well as the second half are extremely important, especially on the defensive end,” Westby said. “You’re going to have your nights where you struggle offensively, but your defense needs to be there every night and that was a good beginning and a good start to the second half as well defensively for us.”

The Tigers would later build a 68-38 lead and maintained at least a 25-point advantage the rest of the way en route to the 81-44 victory.

Hilgemann led the way for Marshall with 23 points while Estrada added 12 and Emily Meier and Wendorff each had nine. Hilgemann and Wendorff led in rebounds with six each while Estrada led in assists with five. As a team, Marshall shot 48 percent (31 of 64) from the field, including 7 of 17 (41 percent from 3-point range).

Marshall (16-5) will have a quick turnaround, as the Tigers square off against Pipestone Area today at 7:15 p.m. With three total games this week, Westby said it’s difficult to make adjustments with little practice time, but knows his team has the experience to help them continue to stay focused as they head down the final stretch of the regular season.

“I probably differ in the fact that I enjoy practice whereas our players probably look forward to playing a number of games in a row, but we haven’t had much practice time lately,” Westby said. “It’s hard to make adjustments on the fly like this but we do have a number of kids that have played a lot over the years so with their experience it really shouldn’t affect them as it might with other teams.”