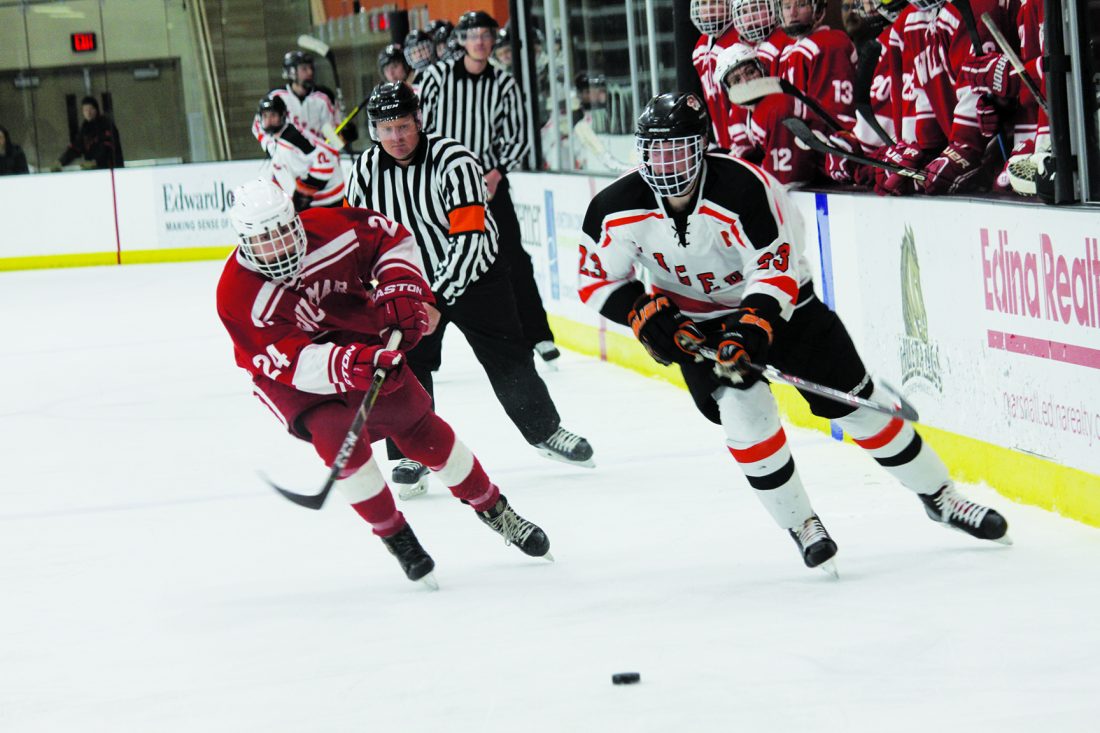 Photo by Jake Przytarski Marshall’s Bryson Whyte chases after a loose puck during their game against Willmar on Monday. The Tigers defeated the Cardinals 3-1.

MARSHALL – For the fourth time in the program’s two-decade long history, the Marshall boys hockey team reached the 20-win mark with a 3-1 home-victory over the upset-minded Willmar Cardinals on Monday.

Faced with the tough-task of trying to find the back of the net against a red-hot goaltender in Willmar’s Gunnar Banks, coach Michael Weiss came away highly impressed with his team’s tenacity in battling for the crucial third goal to ice the visitors.

“I thought we played well,” said Weiss. “We really got after it, and they had a hot goalie. He was playing really well and we just kept trying to go at him and go at him and then finally we got that third one in there at the end.”

In spite of the end result, it appeared early on as if the Tigers would put a dozen past the Cardinal net-minder after a barrage of early chances help setup their first power play attempt.

The Tigers, without two critical pieces to their man-advantage attack in defenseman Kaleb Welvaert and Tristan VanDeVere, utilized superb puck-movement capped off by Mason Plante finding Bryson Whyte alone in front of the net with a nifty feed to give the Tigers a 1-0 lead.

For Weiss, the strong effort on the power play was especially encouraging given the lack of practice time leading up to the game in addition to having to plug new players into the mix.

“It was good, we haven’t had a practice for awhile so we haven’t gotten to work on it much, but they’ve done a good job of stepping up,” said Weiss. “We’ve had a couple of guys out of the lineup and we’ve had to punch guys in and they got it done tonight so it was a good special teams (night).”

Quick to respond, the Cardinals put their first and only goal on the board minutes later to even the score at one. Fortunately for the home team, the tie was shortlived as Plante once again created a scoring chance, this time for Grant Hoff, who deposited the puck in the net for his first goal at the varsity level – giving the Tigers a 2-1 lead that would last until the third period.

After a second period filled with grade-A scoring chances featuring multiple odd-man rushes and nothing to show for it, the Tigers went back to work in the third period determined to finally get one past Banks. Nearing the 13-minute mark, Whyte did just that as the junior picked up his second of the night and 21st of the season to put the game away for good.

According to Weiss, the approach taken by the team in trying get one past Banks, who had been standing on his head throughout the game, was to remain positive and make the most of opportunities that come their way.

Not to be outdone, the Tigers had their own red-hot goaltender in Dominik Caspers, who ended the night with 25 saves on 26 shots to pick up his 16th victory of the season – good enough for a six-way tie for fifth place in state.

With the win, Marshall moves to 20-2-1 on the year and will look to pick up its 21st victory when they take on Morris/Benson Area at home on Thursday at 7 p.m.

Down to only two games remaining in the regular season, Weiss is imploring his team to treat each and every game from here on out as if it were a playoff game.

“It’s gotta be a playoff mindset now,” said Weiss. “If you lose you go home. So we just have to keep getting after it. Every period has to be our best period and (we) just (need to) keep getting better.”