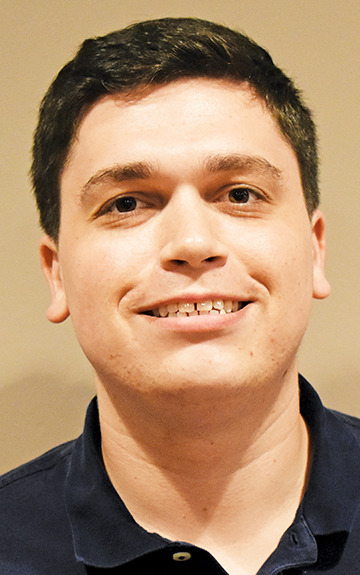 MARSHALL — Here in the state of hockey, you’d be hard-pressed to find a more exciting time in prep sports than the start of the winter sports season, and more specifically, hockey season.

For the city of Marshall, it’s no different, as strong support from the community and a yearly tradition of competitive teams has helped form strong traditions for the girls and boys Tiger hockey programs. As a result of the continued success, there have been numerous players that have gone onto play beyond the high school level of competition.

Taking a look back, I have compiled a list of former Tiger hockey players that are currently competing at the next level–whether it be at the junior level or collegiate, and provided an update on where they are currently at with their new teams.

Standing alone as the only Marshall Tiger boys hockey alumni to make it to the Division 1 level, Nolan Schaeffer’s journey to Robert Morris University near Pittsburgh, PA was set in motion on the Marshall varsity team during the 2011-2012 season playing as an eighth-grade defenseman.

In the years that followed, Schaeffer elected to compete in the High Performance Hockey League and later went on to play four full seasons of junior hockey that included stops in Fargo, N.D., playing for the Force of the United States Hockey League, and thee stops in the North American Hockey League beginning with the Coulee Region Chill located in Flint, Michigan, the Minnesota Magicians located in Richfield and the Fairbanks Ice Dogs in Fairbanks, Alaska.

After his long junior hockey career, Schaeffer saw the fruits of his labor rewarded with a Division 1 scholarship to Robert Morris University in 2017. Now 10 games into his collegiate career, Schaeffer has tallied one assist and has helped lead the Colonials to a 3-6-1 record.

A three year varsity member of the Marshall Tigers boys hockey team as a forward, Rasmussen put together one of the best statistical seasons in school history in 2014-2015 in which he compiled 29 goals and 35 assists for 64 points in only 25 games. As a sophomore, Rasmussen was a member of the 2012-2013 team that went on to compete in the program’s first state tournament appearance.

Following his time at Marshall, Rasmussen took his talents to North Dakota State University where he is in the midst of his senior season at the American College Hockey Association Division II level. Through 18 games this season, Rasmussen has tallied 16 goals to pace the team and added another 10 assists for 26 points.

Split time in backstopping the Tigers with fellow goaltender Adam Cavazos during the program’s lone state tourney run in 2012-2013, Campion graduated the following year and finished his high school career as one of the best goaltenders in school history.

Following high school, Campion spent time at Dordt College in Sioux Center, Iowa competing at the ACHA Division III level before moving on to the University of Jamestown for his sophomore season. Now in his senior season, Campion has reunited with Tiger teammate Rasmussen at NDSU where he has been on roster since the 2017-2018 season.

Currently embarking on his first full season at the junior level, VanDeVere ended his high school career last season with a 42-point showing with 21-goals, good enough for second on the team behind current Tiger senior Mason Plante with 38.

The WarHawks team, founded in 2007, has been a stepping stone for players after high school to showcase their talents to D3 schools and ACHA programs. Already 15 games into the season, VanDeVere has posted two goals and two assists.