Mustangs shut down Cougars defensively to stay perfect in NSIC?play 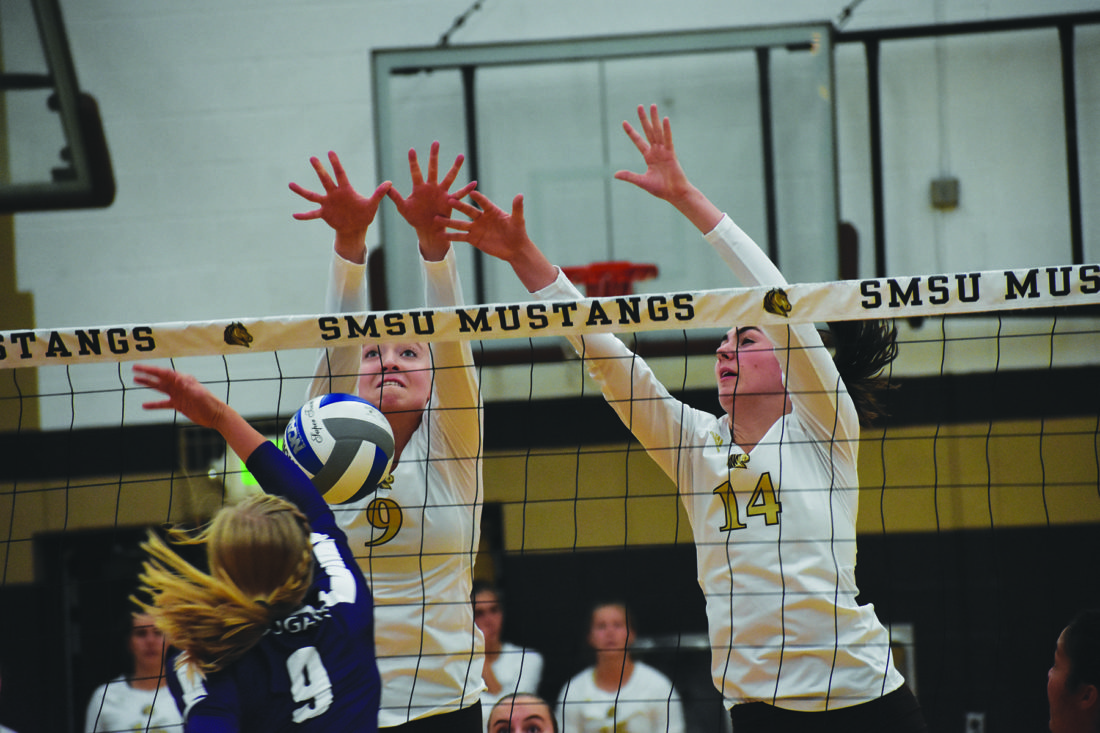 Photo by Sam Thiel SMSU’s Meg Schmidt (9) and Lexi Ferrell (14) team up to block a tip attempt from the University of Sioux Falls’ Averey Yaksich during their match on Tuesday. The Mustangs defeated the Cougars 3-0.

MARSHALL – The No. 7 Southwest Minnesota State University volleyball team soared above the net to earn its sweep Tuesday night against the University of Sioux Falls. Not on the offensive side, but on the defensive one instead.

“I think just knowing where your hitters are, especially since before we were just recognizing what their tendencies were, so we found that really helped with our defense,” Schmidt said.

It was tight to start between the two NSIC foes, as the score was deadlocked at 5-5 in the opening minutes. A Taylor Reiss kill put the Mustangs in front at 10-9 before a block from the senior outside hitter helped create some separation at 14-10.

SMSU continued to build onto its advantage near the midway mark of the opening set, going up 17-11 before a block assist and a kill from the freshman Schmidt gave the Mustangs their largest lead of the match thus far at 20-12. SMSU eventually built its first double-digit lead of the evening at 23-13 before claiming Set 1, 25-17.

After dropping the opening frame, the Cougars looked to get out to a better start in Set 2 and did just that, going up 5-2 early. SMSU hung around, however, and went on an answering run highlighted by multiple blocks up front. The defensive display helped put the Mustangs back in front at 11-10 before they continued their strong play to push their advantage to 17-11.

The Cougars weren’t quite finished, though, as USF countered with a quick 6-2 run of its own to cut the deficit to just two at 19-17 before tying it up at 19-19. SMSU responded with a pair of kills from Reiss and Schmidt to retake the lead at 21-19, ultimately hanging on by a score of 25-21 to take a 2-0 lead in the match.

Just like they did in Set 2, USF began Set 3 with another quick start, jumping out to a 4-1 advantage. SMSU battled back once again, however, tying things up at 5-5 before a Schmidt kill put the Mustangs in front at 7-6. The outside hitter wasn’t done there, netting another kill before Smith and Angela Young each got a block assist to put make it 11-7.

The Mustangs defense continued to make its presence strong at the net in the middle of the frame, with more blocks leading to points for SMSU on its way to an 18-11 advantage. Looking to try and force a fourth set, the Cougars used a 6-2 run to cut the deficit to 20-17, but SMSU scored the next three points on its way to a 25-19 third set victory and a sweep of USF.

SMSU coach Terry Culhane said despite coming away with the win, it was tough to get themselves into a rhythm throughout the match and knows that every match in their conference isn’t going to be easy.

“We just had a hard time getting any flow and that’s happens when you’re playing good teams, they don’t allow you that and stop some of the things you’re doing,” Culhane said. “You just have to be ready mentally and physically to play in our league and USF is a really good team and have some really good players. You need to be ready to battle, just like this Friday and Saturday we’ve got to ready to play.”

Reiss led the way for the Mustangs with 13 kills while Schmidt added 11 and Young chipped in 10. Reiss and Kaylee Burmeister led in digs with 10 apiece while Emma Thomssen led in set assists with 38. SMSU hit .287 as a team.

Schmidt said their key offensively was being aware of USF’s weaknesses on defense and taking advantage on the outside attack.

“I think just knowing where their weaknesses were and knowing that didn’t have a strong block on the outside, so just taking advantage of that,” Schmidt said. “And then just keep going at them and not give anything easy to them.”

Culhane added he was pleased with Schmidt’s performance and felt she was able to step up and be a leader on both sides of the net when needed.

“I thought Meg really did a nice job early in the match to save us in tough spots,” Culhane said. “Obviously part of the game is terminating the ball and Meg not only did a good job of attacking but she also did a good job of blocking and defending which helped set the tone for us in a situation where we really needed someone to step up.”

SMSU (8-3, 3-0 NSIC) will continue its three-match homestand with a matchup against Winona State University on Friday night at 6 p.m. Schmidt said their biggest takeaway will be coming out stronger to start the match.

“Knowing that we have to come out stronger the next games because it’s not going to be easy and that we have a lot to work on in practice,” Schmidt said.