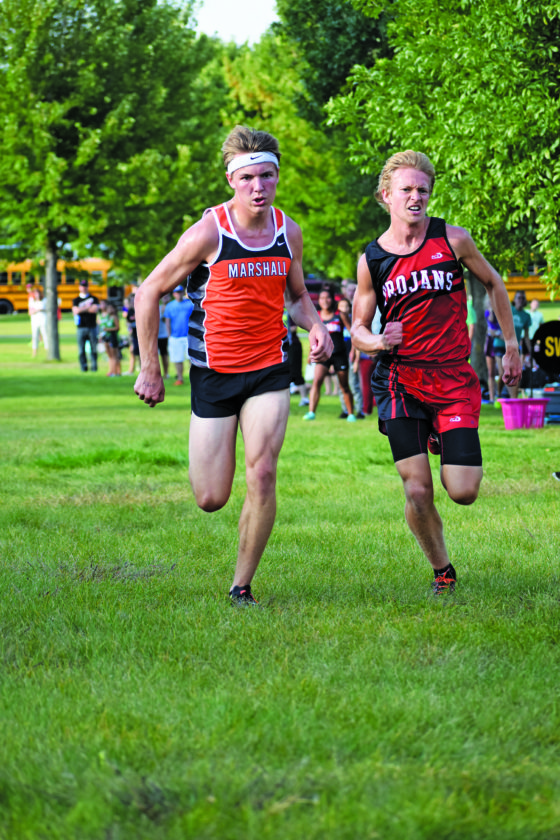 On the girls side, Marshall took first place with a score of 42 points, followed by Murray County Central in third (130), Canby/Minneota in fourth (140) and Wabasso in 11th (264). Lakeview and Tracy-Milroy-Balaton had incomplete teams.

Marshall girls coach Marie Sample said she was pleased with the way her runners performed overall.

“This is our only home meet, so they love to run here. It’s always fun, they get kind of excited but they also get kind of nervous. Their plan was to go out in a pack and go out a little slower, but they ended up going a little faster, so that pack kind of broke up a little bit,” coach Sample said. “I was really happy with the way they kept going; they kept the pace up even though they were falling off a little bit of each other.

Coach Sample said their biggest takeaway will be trying to close their pack of runners even tighter and continue to lower their times throughout the season.

“Our fifth, sixth and seventh runners all PR’d and had the fastest times of their careers,” coach Sample said. “We’ve got some work to do to cinch that pack together again, but we’ve got some super hard-working kids and they’re willing to do whatever you ask of them to do. Their times are really coming down in big chunks every meet, so we’ll see how long we can keep that going.”

Marshall coach Brian Leibfried said he was pleased with his team’s ability to get out in front and maintain good position, especially from Matzner.

“Defending on our home course, I thought our guys went out to the front and got themselves in a really good position,” Leibfried said. “For some, that maybe have been a little uncomfortable with the training that we’ve been doing, but overall I know the guys have worked extremely hard and competed their best. Obviously, Zach had a great race with winning and it came right down to the wire, and I really thought the Worthington kid was going to take it, but Zach found another gear and was able to come away with it.”

Leibfried said their biggest takeaway will be having more of a balance with their Top 5 runners but felt good with their overall performance.

“We need to look to narrow that gap between our No. 1 and No. 5 runners, and once we do that, we’ll start to score a little bit better,” Leibfried said. “I think we were in reach of winning the meet and with everyone’s best day I think we could’ve done that, so you’ve got to feel good about that you’re right in the mix of things. We’re seeing some people come around with our seniors and our juniors were our pushers and overall I’m happy with their performance and I look forward to going on Thursday.”