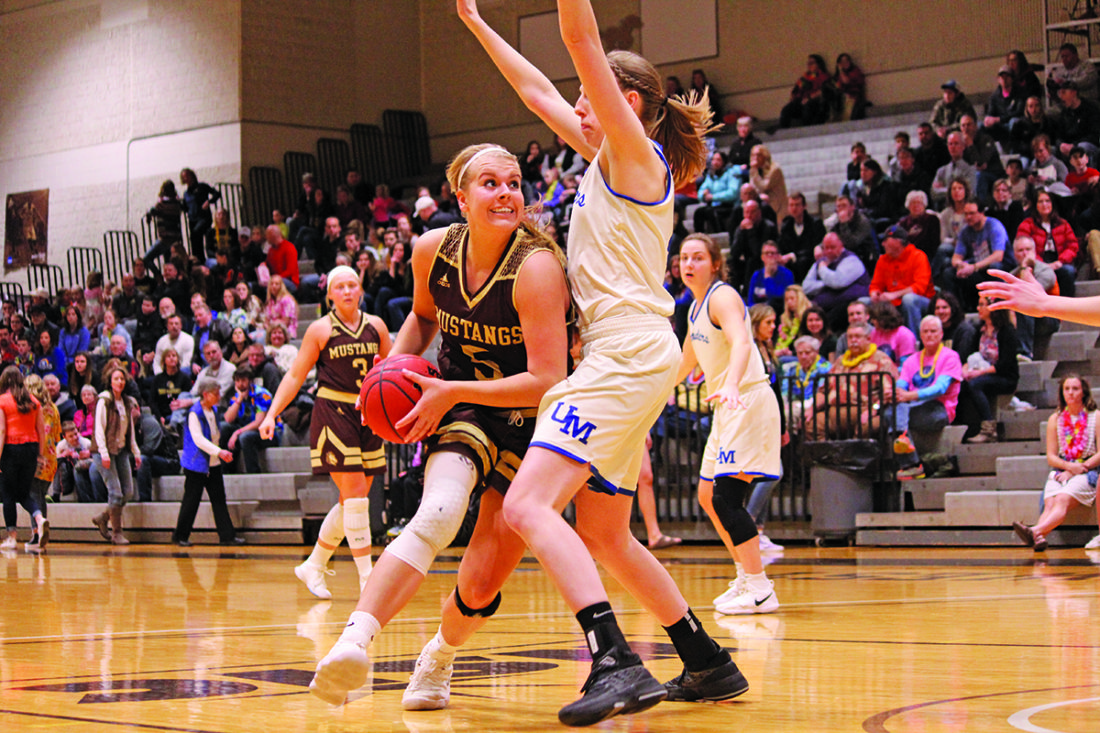 Independent file photo SMSU’s Caleigh Rodning looks to score during their game against the University of Mary on Feb. 3. The Mustangs will face Minnesota State University Moorhead tonight in the NSIC/Sanford Health Tournament.

– If SMSU wins tonight, it would advance to the tournament quarterfinals on Sunday at 8 p.m. at the Sanford Pentagon in Sioux Falls, S.D., versus either Sioux Falls or U-Mary.

– SMSU is looking for its first victory in the NSIC Tournament since beating Wayne State in the quarterfinals of the 2003 tournament.

– MSU Moorhead has won the last seven meetings between the two teams.

– Senior forward, Lauren Hedlund, became the 19th member of the SMSU women’s basketball 1,000 career points club earlier this season against UIU and currently ranks tied for third in team history in free throws attempted, fifth in rebounds and tied for sixth in free throws made.

– This is the second straight season and third time overall the two teams have meet in the NSIC Tournament. MSUM won last season’s meeting, 71-35. SMSU earned an 84-57 at the 2002 NSIC Tournament in St. Paul.

– MSU Moorhead is 37-31 over SMSU in conference games.

– The Dragons hold a 28-14 advantage in games played in Moorhead.

– The SMSU women’s basketball program honored its two seniors this past Saturday in the Mustangs final home game of the season.

– Lauren Hedlund has logged over 2,300 career minutes in 108 career games for the Mustangs.

– MSU Moorhead won a share of the NSIC North and Overall titles this season.

– Cassidy Thorson has connected on a team-high 68 3-pointers for the Dragons and is scoring 10.5 ppg.