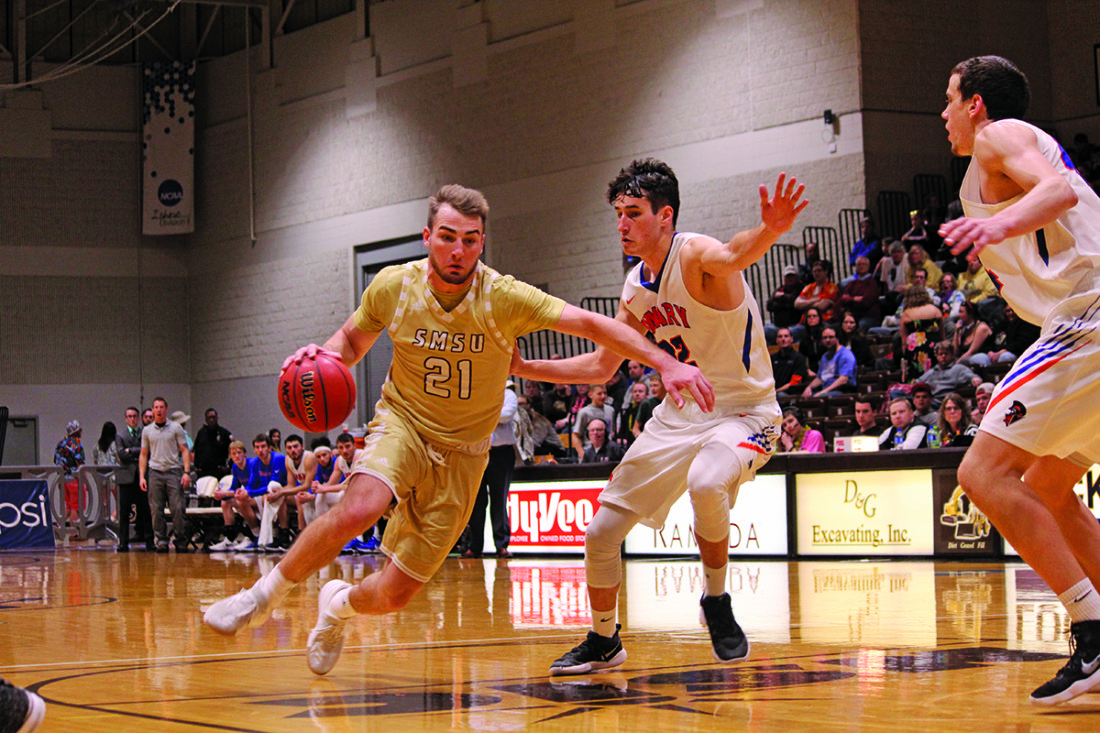 Independent file photo SMSU’s Turner Moen drives past a University of Mary defender during their game on Feb. 3. The Mustangs will take on the Marauders in the NSIC/Sanford Health Tournament tonight.

•The winner of tonight’s game will advance to the quarterfinals on Saturday to face either Augustana or Bemidji State at 5:30 p.m. at the Sanford Pentagon in Sioux Falls, S.D.

•SMSU has committed nine or less turnovers in 11 games.

•SMSU tied a season-low with just two turnovers in the win versus Concordia-St. Paul last Saturday.

•SMSU tied a season-high with 14 3-pointers in the win over CSP last Saturday.

•SMSU is shooting 48.7 percent from the field this season which ranks tied for fifth highest in team history. Seven of the top nine shooting teams in team history have come under head coach Brad Bigler.

•Ryan Bruggeman has made 138 free throws this season and is just 10 away from tying Scott Koenen (2000-01) for the program single-season record for free throws made.

•SMSU has 11 home victories this season which is the first time since 2013-14 that SMSU has reached double figures in home wins.

•SMSU is 18-2 when opponents shoot less than 50 percent from the field.

•Southwest Minnesota State and U-Mary meet for the 17th time on Wednesday night with SMSU leading 13-3.

•This will be the second time the two teams have played in the NSIC Tournament with SMSU winning 82-65 in the first round of the 2014 tournament.

•Carter Kirk scored 22 points on 9 of 11 shooting and pulled down a game-high eight rebounds to pace SMSU over U-Mary on Feb. 3.

•SMSU shot 61 percent from the field in the second half, outscoring U-Mary 48-29, to pull away for the victory.

•Trevor Zacher led the Marauders with a career-high 27 points on 8 of 11 shooting with four 3-pointers.

•U-Mary finished the regular season 6-20 overall and placed eighth in the NSIC North Division with a 4-18 NSIC record.

•Javian White is averaging 9.2 ppg with a team-high 104 assists.

•Head coach Joe Kittell is in his third season with a record of 37-49.