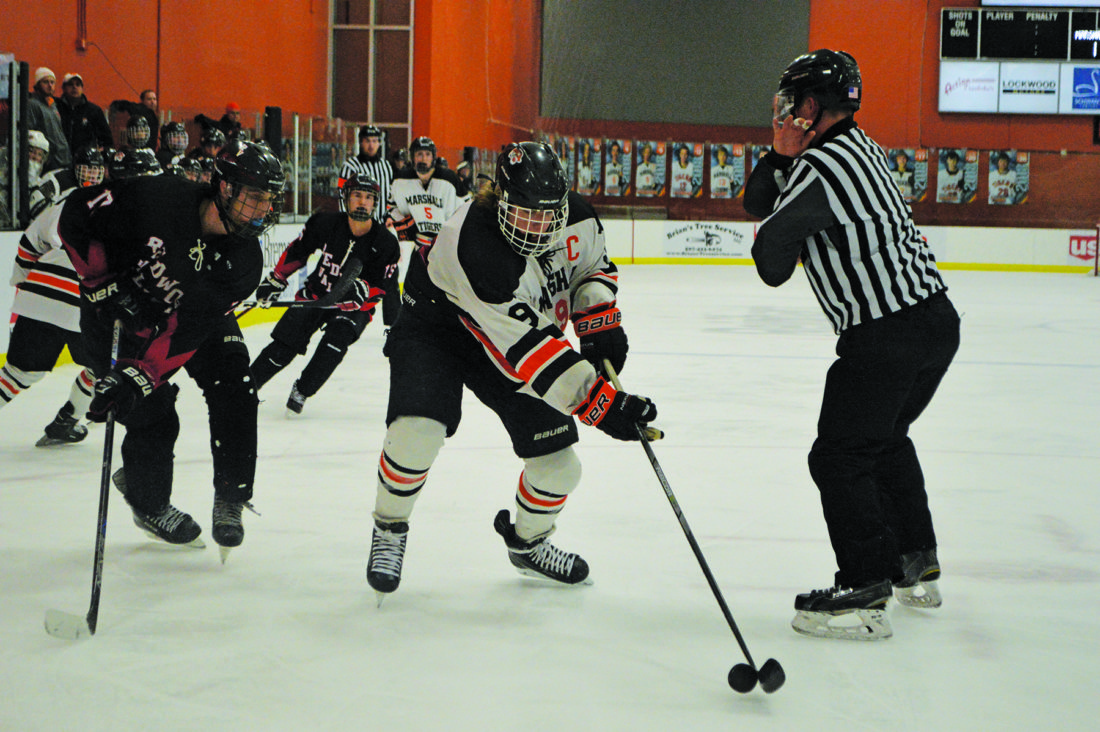 Photo by Emily Daniels Marshall’s Chase VanDeVere controls the puck during their Section 3A quarterfinal game against Redwood Valley on Thursday. The Tigers defeated the Cardinals 3-1.

MARSHALL – The Marshall boys hockey team entered their Section 3A tournament game against Redwood Valley looking to come out strong. The Tigers were able to get a goal in the opening period, but it was their third period play that gave Marshall a boost, with the home team coming away with a 3-1 victory over the Cardinals.

Despite going into the final frame tied, the Tigers were able to put together enough plays down the stretch to advance to the semifinal round on Saturday night.

With a few injuries that have been going on in the team, Chase VanDeVere saw a lot of the younger players step up and that helped guide the teams chemistry for the entirety of the game.

“We had a lot of the younger guys step up and it played a big role in getting a spark going for us. It got us to have a lot of movement with the puck, which got Redwood to be on their heels,” said VanDeVere. “Going into the next game we definitely can’t come out flat, we have to work on preparing ourselves before our next game.”

The Tigers came onto the ice fast and aggressive to start, but struggled to find open shooting lanes. Marshall then was finally able to capitalize on a pass from Caden Thordson to Joe Archbold, who found the back of the net to put the Tigers up 1-0 with 7:01 left on the clock. It was a short and sweet first period for the Tigers as they held their 1-0 lead for the remainder of the frame with the help of goalie Dominik Caspers, who held his own in front of the net.

Coming into the second period with the early lead, the Tigers continued to show their dominance on the ice in the beginning stages. Marshall would find a few times when its defense started to slip and the Cardinals found that as an opportunity to pick it up on the offensive end. Redwood Valley started to find its groove which led to Logan Prouty putting the first goal in for the Cardinals, tying up the score at 1-1 with 2:37 remaining in the period. The last few minutes on the clock went by with neither team finding an opportunity to extend their lead, and the game would head to the final frame deadlocked at one apiece.

Marshall didn’t hold anything back to start the third, as it came in ready to fight the last 17 minutes of the game. The Tigers strengths on the offensive end showed as Kaleb Welvaert found the back of the net on the assist from Chase VanDeVere and Noah Versaevel to put Marshall ahead 2-1 with 14:45 left in the game. The Cardinals began to lack the energy that was needed if they wanted to stay up to pace with Marshall, and the energy drought for Redwood Valley was a big opportunity for the Tigers to grow their lead even more. VanDeVere and Welvaert saw one more chance to get another shot in, and with a few passes they got it to Tristan VanDeVere who fired it in to push Marshall’s lead to 3-1 with 7:27 remaining in the game. Not only was the offensive side for Marshall a big strength for the Tigers in the final frame, but Caspers continued to protect the net, with the goaltender holding the Cardinals scoreless in the third period that ultimately led to the two-goal victory for Marshall.

The Tigers will face Litchfield/Dassel-Cokato in the semifinal round of the Section 3A tournament on Saturday at the Don Roberts Ice Rink at Gustavus. The last time the Tigers and the Dragons met, LDC came out victorious with a 2-1 win.

Going into their next game of the tournament coach Michael Weiss wants the team to go out strong and play the game of hockey they know.

“We have to come out into all three periods hard and there can’t be anytime off,” said Weiss. “LDC is going to come out and jump on us, they’re big and aggressive. We have to be ready to go.”