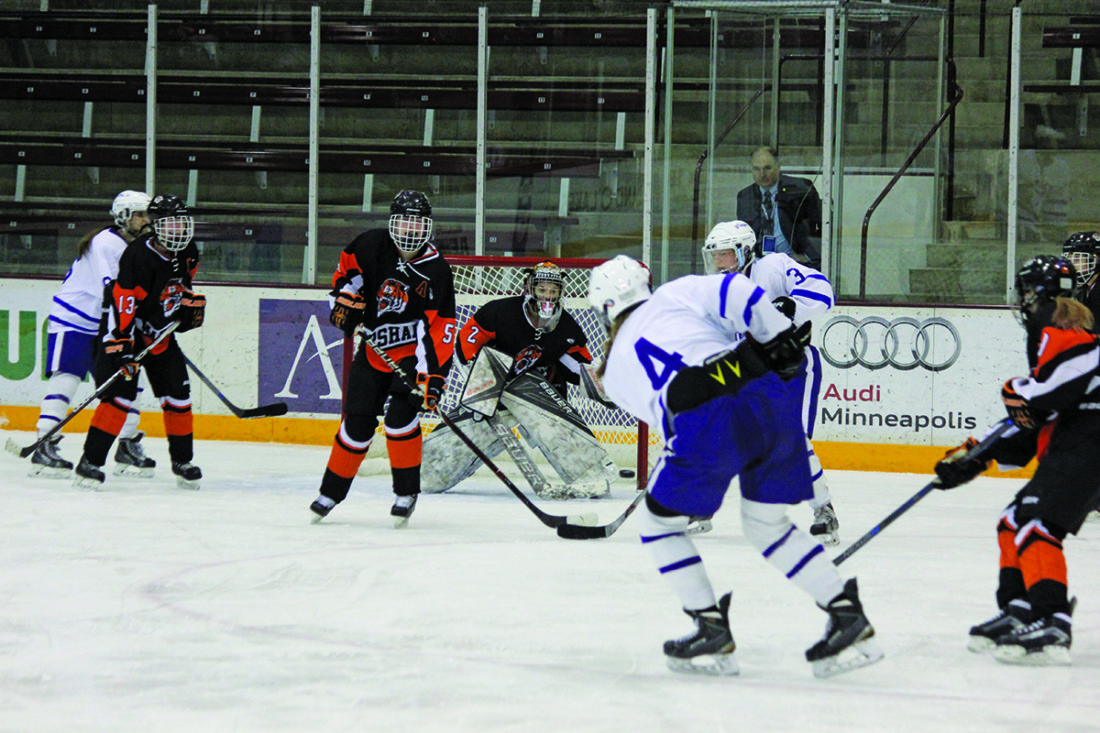 Photo by Jenny Kirk Marshall’s Emma Klenken (2) and Sydney Mauch (5) watch a shot from Red Wing’s Emily Hart during their Class A consolation game on Thursday.

MINNEAPOLIS – The Marshall girls hockey team had hopes of extending their season and playing in the consolation championship of the Class A tournament, but those hopes were extinguished when they fell to third-seed Red Wing 7-0 in the consolation semifinals on Thursday at Ridder Arena on the University of Minnesota campus.

Red Wing improves its record to 24-5 overall record, while Marshall finishes its season at 17-10.

Wingers senior forward Taylor Heise tied a state tournament single-game record in the game, as the senior scored six of the seven goals for Red Wing.

“That girl is fast,” one of the Marshall players said about Heise as the Tiger player came off the ice. Heise, who has now recorded 73 goals this season and will play for the Minnesota Gophers next year, tied the state mark that was previously set by Park Center’s Krissy Wendell in 1999.

“We didn’t come out on top, but I’m just so happy that we got to come here to state,” Marshall forward Rachel VanKeulen said. “Like so many teams, it’s their goal just to go to state and I’m so thankful that we got that opportunity.”

VanKeulen is one of three seniors on the team. She finishes out the season with 23 goals and 14 assists. She said the best part about her hockey career was just being with the team and making memories.

“I’m never going to forget going to state my senior year,” she said. “And playing at the Xcel Energy Center was so amazing. We got to be in the visitor’s locker room, so where all the teams that the Wild play, we got to be in there.”

Courtney Mauch closes out her senior season with 14 goals and 13 assists. Senior Amaya Strivens tallied five goals this year. Mauch, who started hockey when she was a third-grader, said she treasures just being part of the team.

Like VanKeulen, Mauch said she was really proud of their team for getting to the state hockey tournament.

“Both teams we played were so aggressive and I thought for the most part, we stuck with them and showed them we belonged up here,” Mauch said.

Eight seconds into the first period, Heise fired her first shot into the back of the net. She followed that up with another goal at the 11:43 mark. Red Wing took a 3-0 lead into the second period after Eliza DiNatale capitalized with only two seconds remaining.

The Tigers stepped up their game in the second period, skating more aggressively and holding the Wingers to 11 shots, the lowest of the three periods. Red Wing had a total of 47 shots on goal in the contest.

Marshall also passed the puck around with more success, though the team couldn’t sneak one into the net. The Tigers had 23 shots on goal throughout the game.

“I’m so proud of the girls,” Marshall head coach Deanna Suby said. “They fought hard in the second. They came back a whole new team. They knew what they wanted to accomplish. Sometimes our second period can be a little more difficult, but those girls took it to them.”

Despite their 0-2 record at state, Suby said there are plenty of positive takeaways.

“It’s a hard way to end the season, but we got two extra weeks,” Suby said. “Not everybody gets that. And we were among the eight best teams in Class A. We got to play great teams.”

Suby added that it was an honor to play at both venues as well as represent Marshall and Section 3A.

“It’s not just about playing hockey,” she said. “It’s about the experience here, whether it’s at the Xcel or here at Ridder Arena. And what I’m most proud of is that the girls showed great integrity, character and respect. It’s not all about winning. It’s about carrying that through and representing Marshall here.”

VanKeulen said she and her teammates were proud they got the team sportsmanship award last year.

“That was pretty cool,” she said. “And I think we came back here this year and showed we deserved that. Even though some teams might not have been playing exactly how we’re used to, we tried to stay at our level of integrity.”

Though she spent 10 years as an assistant coach, this year marks the first that Suby has been the head coach at Marshall. She’s hoping that history repeats itself and the Tigers will return to the state hockey tournament next year.

While Suby said she feels fortunate to have a “very well-rounded team,” she knows athletes will have to step into the roles vacated by the seniors.

“They’re the heart of our team,” she said. “They’re such wonderful people. Each one brings a different aspect to our team and strengths to our team. They will be missed.”

One of the youth returning next year is freshman goalie Emma Klenken, who earned 40 saves in the game against Red Wing.

“Emma did amazing (Wednesday) and look at the shots that she had (Thursday),” Suby said. “It was another fantastic game by Emma, just playing the puck and holding us strong and grounded the whole time. I’m very pleased with both of her games.”