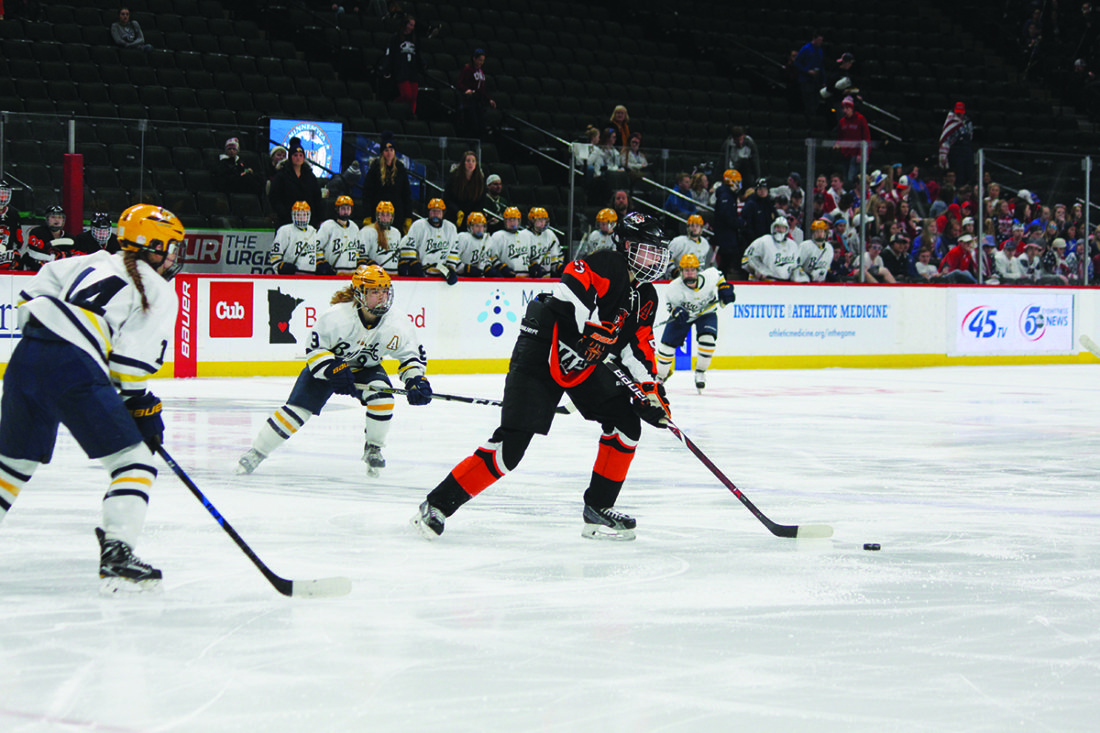 Photo by Jenny Kirk Marshall’s Sydney Mauch controls the puck during their Class A state tournament game against Breck on Wednesday.

ST PAUL – From the time second-seeded Breck School took the ice at the Class A girls hockey tournament on Wednesday at the Xcel Energy Center, the Golden Valley team wanted to come out firing.

The Mustangs did just that, as Breck outshot the Marshall Tigers 54-15, found the back of the net twice in the opening period and then capitalized with five additional goals in the second en route to defeating the unseeded Tigers 9-2.

“Breck was a fantastic team,” Marshall head coach Deanna Suby said. “Their communication was so effective with each other that they just played so consistently with each other. That gave them a jump over us.”

Suby said she was pleased with the way her team started the contest, playing with confidence and cohesiveness like they have all season long.

“We wanted to come out strong, like we have for every other game, and play our game with the confidence and knowledge that we are a tight-knit team and the unity that we have, that we’re going to stay strong for all three periods,” she said. “They came out exactly the way they wanted to in the first period.”

In the second period, Breck used its speed, strength and depth to take a 7-0 advantage over the Tigers, as six different players scored goals throughout the game.

“Recently, they’re starting to find their stride as a team,” Breck head coach Ronda Engelhardt said. “We do have a lot of depth. It’s a good, cohesive group. We can count on all three lines to put the puck in the net, which is nice for us.”

After assisting Carly Beniek on a power-play goal at the 13:09 mark in the first period, Breck’s Olivia Mobley fired one into the net just over two minutes later. The pair each connected for a second time, as did three of their teammates, in the second period.

“We said that if we give 100 percent effort every shift, every second of every shift, we know we’ll have a successful outcome,” Mobley said. “That’s exactly what we did. The first period, we came out flying and it was extremely fun. We were talking, communicating, catching passes. The second period, we started to mix in new players, which was very cool for the leaders on the team to see that. Overall, we came in with a game plan and we were successful.”

Facing a shutout, Suby reiterated the keys for success to her team between the second and third periods.

“I just had to let them know, again, to calm down and to play their game, that they know they’re strong girls, that we’ve played together for our whole season, and again, we’re a unit, we are a team that is one,” Suby said. “And that’s something I’ve stressed through the whole season; that we are a team and we need to play together.”

Marshall came out with a renewed effort and plan of attack, scoring its first goal of the contest 1:47 into the third period. Sydney Mauch’s shot on goal was assisted by Olivia Peterson and Leah Schaefer.

“They changed their outlook on how they wanted to come out for the third and I just left the locker room saying, ‘You know what you need to do. Decide on how you want to come out,'” Suby said. “And they came out exactly the way I thought they would.”

Courtney Mauch then fired home an unassisted goal at the 12:15 mark to give the Tigers their second score of the game, but Breck’s fast start created too much of a deficit to overcome.

Marshall goal Emma Klenken earned 45 saves on the game, including 19 in the first period while Ally Frantzick collected 13 saves for Breck.

The Mustangs (17-10-1) advance to the semifinals today and will face unseeded Proctor/Hermantown, who upset third-seeded Red Wing in the quarterfinals on Wednesday.

Marshall (17-11-0) will take on the Wingers at 10 a.m. today at Ridder Arena on the campus of the University of Minnesota in Minneapolis. The winner will play for the consolation championship at 10 a.m. on Saturday.

“We need to get a good night’s rest,” Suby said. “Playing back-to-back is always something we need to take into consideration, making sure they get ample rest. We’ve got another game and we’re going to come back fighting the same way we did in the first and third period.”

The Tigers are competing at state for the third time in school history and the first since 2008. Suby acknowledged the outstanding accomplishment for the team, noting that the unwavering support they’ve received makes it all the better.