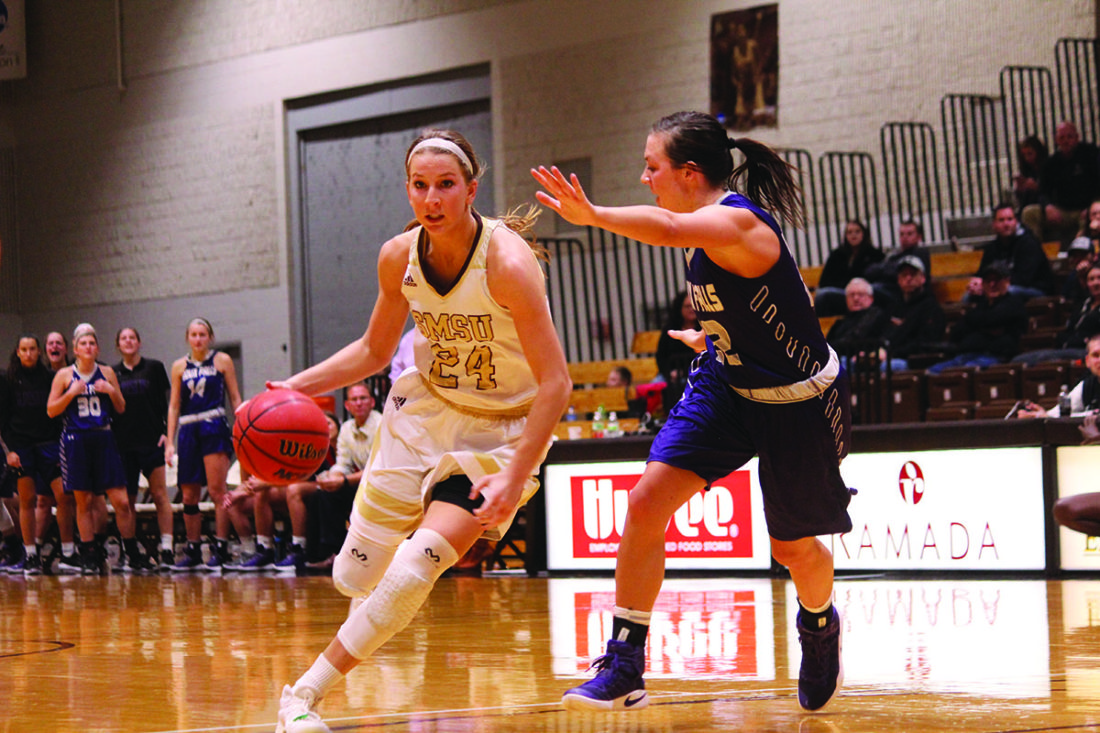 Independent file photo SMSU’s Erin Baxter drives past a University of Sioux Falls defender during their game last Saturday. The Mustangs will face Augustana and Wayne State next weekend.

MARSHALL – Following a short holiday break, the Southwest Minnesota State women’s basketball team will return to the court on Dec. 30th and 31st as it hosts Augustana and Wayne State in the R/A Facility.

SMSU will first take on Augustana on Saturday, Dec. 30, at 4 p.m., followed by a second straight New Year’s Eve game against Wayne State on Sunday, Dec. 31 at 2 p.m.

– Augustana is off to the best start in program history since the Vikings started out 11-0 in the 1996-97 season.

– Logan O’Farrell picked up her 2nd double-double of the season scoring 21 points and snagged 10 rebounds on Tuesday night vs. Wayne State.

– Senior, Paige Peterson, had 12 points off the bench Tuesday night vs. Wayne State.

– The Vikings have won five straight games over SMSU dating back to 2015.

– SMSU is 9-11 all-time against Augustana at home.

– SMSU is 2-14 all-time against the Vikings in conference games.

– SMSU vs Augustana will be broadcast on 105.1 FM KARL with Ryan Rohlik and Anthony Rohlik handling the play-by-play for SMSU basketball.

– The game can also be viewed online at SMSUmustangs.com.

– Wayne State had a six-game win streak snapped in its 84-59 loss to Augustana on Tuesday night.

– The Wildcats have gone 4-2 to open conference play with wins over Minnesota State, Concordia-St. Paul, U-Mary and Minot State.

– Freshman reserve forward, Payton Draper, scored a season-high 10 points while going 3 for 4 from field against the Vikings.

– SMSU vs WSC will be broadcast on 105.1 FM KARL with Ryan Rohlik and Anthony Rohlik handling the play-by-play for SMSU basketball

– The game can also be viewed online at SMSUmustangs.com