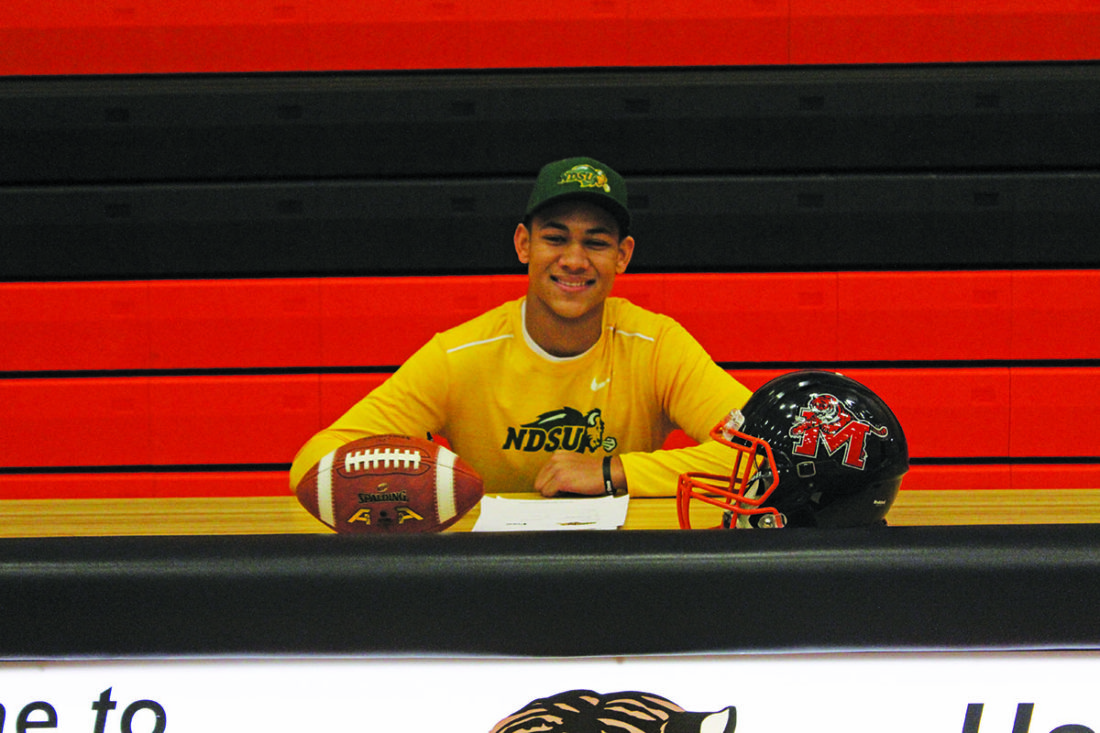 Photo by Sam Thiel Marshall’s Trey Lance poses for a photo after signing his National Letter of Intent to play football at North Dakota State University on Wednesday morning.

MARSHALL – Christmas came a few days early for thousands of high school football players and college coaches across the country, as Wednesday marked Day One of the early National Signing period for the college football world, which will last through Friday.

Marshall senior quarterback Trey Lance was among that massive group, as he officially signed his National Letter of Intent to play at North Dakota State University. Lance said he was excited to finally have the day come and be committed.

“It’s really cool; I’m glad to be done with it, and I’m really thankful for the process. It’s been fun, at times a little stressful, but I wouldn’t trade it for anything,” Lance said. “I’m so glad for all the opportunities to play at other schools, but I’m glad I’m going to NDSU.”

For the past three seasons, Lance has served as the starting signal caller for the Tigers, leading Marshall to three consecutive state tournament appearances. This season, he threw for 1,386 passing yards while completing 52.6 percent of his attempts and added 14 touchdowns through the air. He also was a dual threat in the ground game, rushing for 10 scores. On the defensive end, Lance recorded three interceptions.

Tigers coach Terry Bahlmann said what made Lance’s play on the field so special was the way he carried himself and stayed calm in various moments.

“Athletically, he’s one of the best athletes we’ve ever had, but what stands out is his composure and demeanor on the field and the way he carries himself,” Bahlmann said. “He always seems calm on the outside and that shows for his teammates. He’s been an all-around great football player.”

Bahlmann added that Lance has been a great leader for them and he’s just helped guide him through the process of being recruited.

“We just sort of guide him along the way. Trey does all the work and he’s made the most of his opportunities and has been a great leader for us,” Bahlmann said. “His record is 20-3 I believe, and all three losses are at the state tournament so he’s been a great leader for us. Our role is to provide him with the opportunities and he took them and ran with it.”

Lance said coach Bahlmann and the rest of his coaching staff have done so much for him both on and off the field and he wouldn’t be where he’s at today without him.

“It’s been everything. Coach Bahlmann definitely has done everything he possibly can for me and I really appreciate that; I wouldn’t have been able to do it without him,” Lance said. “Just from on the field to off the field to recruiting, he’s been through it all with Drew [Hmielewski], Blaise [Andries], Reece [Winkelman], Nicky [Ektanitphong], all those guys. He’s been through it so he really helped me with everything.”

Lance is just one of many examples of players who have been able to reach the collegiate level under Bahlmann’s guidance. The Marshall coach said his players see the opportunities that are presented to them and make the most of it, which is a result of their hard work.

“Kids see the opportunities there and we have respect from colleges around the state by coming in and looking at our guys, and our guys work hard,” Bahlmann said. “They spend their time in the weight room, do their running and know that they’re going to get some looks. When the opportunity is there, then they make the most of it.”

Lance said what drew him to the Bison program was not only their winning culture, but also the way the team presented themselves to Lance when they were recruiting him.

“Their program has a winning culture and just the way they do things right all the time. They compete at the highest level, and that’s what I wanted to do,” Lance said. “Also the way they presented themselves to me, when they presented their offer specifically, it really stood out to me because they had a plan for me. They didn’t just say ‘We want you to play here.’ They laid out a plan year by year and what opportunities I would have each year, so that was really cool.”

Lance added he’s going to miss a lot after he graduates from Marshall in the spring, especially the youth around the community that he’s gotten to know so well growing up.

“Definitely the community support and the young kids probably more than anything. Just giving those guys high-fives and getting to know them through youth camps,” Lance said. “I’ve grown up knowing them since they were really little and now I’ll come back from college and they’ll be playing varsity. I’ll also miss the seniors from this year; the guys that I’ve grown up with, it’s going to be crazy leaving them. I’m going to miss them more than anything.”

Bahlmann said he’s going to miss Lance’s leadership next season, but added he’s looking forward to watching Lance develop at NDSU throughout the next few years.

“I think just the camaraderie and his leadership among the team. He carries himself very well and he’s like how you want every high school athlete to be,” Bahlmann said. “The challenge of going in to one of the top programs in the nation and if he can be that leader for them, he’s going to have some great opportunities down the road and hopefully win a National Championship.”