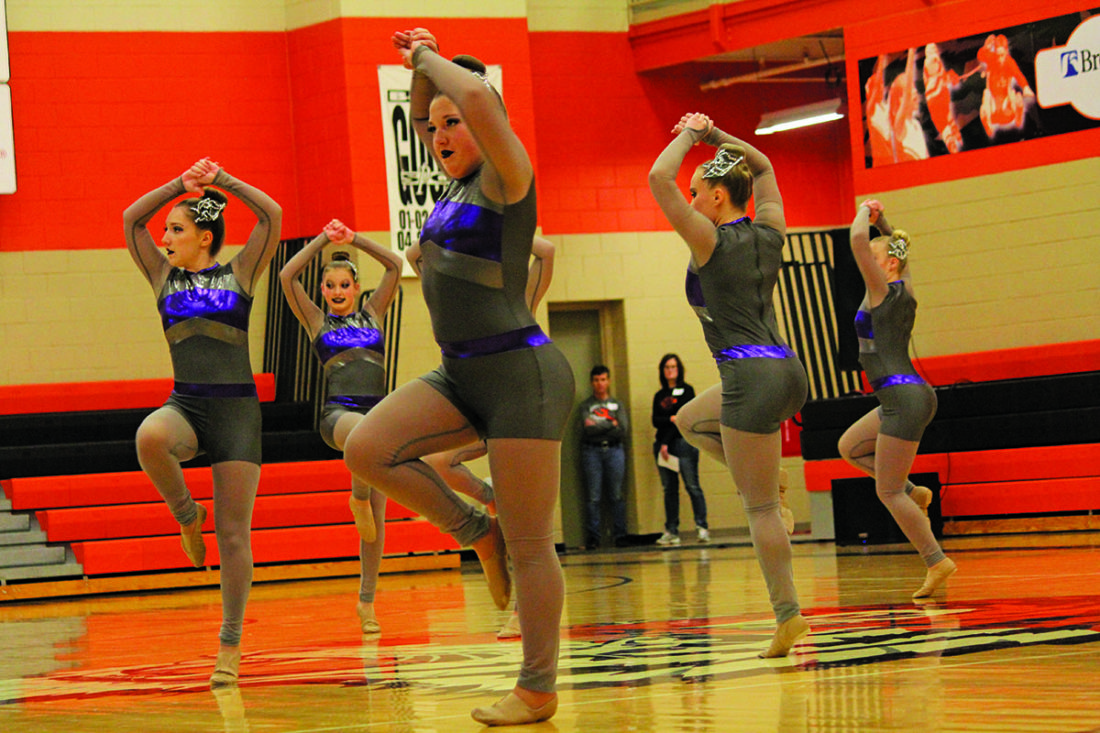 Photo by Sam Thiel Members of the Marshall dance team perform during their meet against Worthington and Fairmont on Monday. The Tigers won in all four categories.

MARSHALL – In sports, competing on the road can bring a unique, and sometimes difficult, atmosphere. But there’s something about competing on your home floor that raises the comfortability bar to a whole new level.

For the first time in nearly three years, the Marshall dance team got to experience what it’s like to have a “home game”, as the Tigers hosted a conference meet, with Worthington and Fairmont joining them for the competition. The Tigers came away victorious, placing first in every category (JV and Varsity kick, JV and Varsity Jazz).

Marshall coach Emily Kern said it’s a great feeling to be able to compete once again on their home floor in front of the hometown fans.

“It’s awesome to be on our home floor,” Kern said. “We don’t get to compete on it a whole lot and we don’t practice at the high school, so anytime we get to compete at home on our gym floor is a really good experience for the girls. And to have the hometown crowd rooting them on is really special.”

The meet started off with the Jazz competition, as the Marshall junior varsity Jazz team got things going. Then after Worthington and Fairmont went, it was the Tiger varsity Jazz team’s turn. After a brief intermission highlighted by performances from the Marshall Just for Kix programs, it was the High Kick competition, with the Tigers varsity kick team bringing the energy to start things off. After a few more performances, Marshall’s junior varsity kick team helped wrap the night up.

Kern said this year’s seniors have had great leadership and bring a specific skill set to the table to help the team succeed.

Meister said as a team they’ve been working on solidifying their bonding skills and going out in competition as one team instead of one person.

“I think as a team, we’ve been working on our team bonding skills and I think that out there we just become one unit,” Meister said. “Instead of dancing as 45 dancers individually, we’re just one big team.”

Marshall will face Lakeville South on Jan. 6 in its next competition. Kuehl said their biggest takeaway is to have no excuses, which has become the team’s motto throughout the season.

“That’s our team motto this year; no excuses,” Kuehl said. “No matter if you’re sick, no matter if you had a bad day, it doesn’t matter. Just go out there and leave it on the floor.”