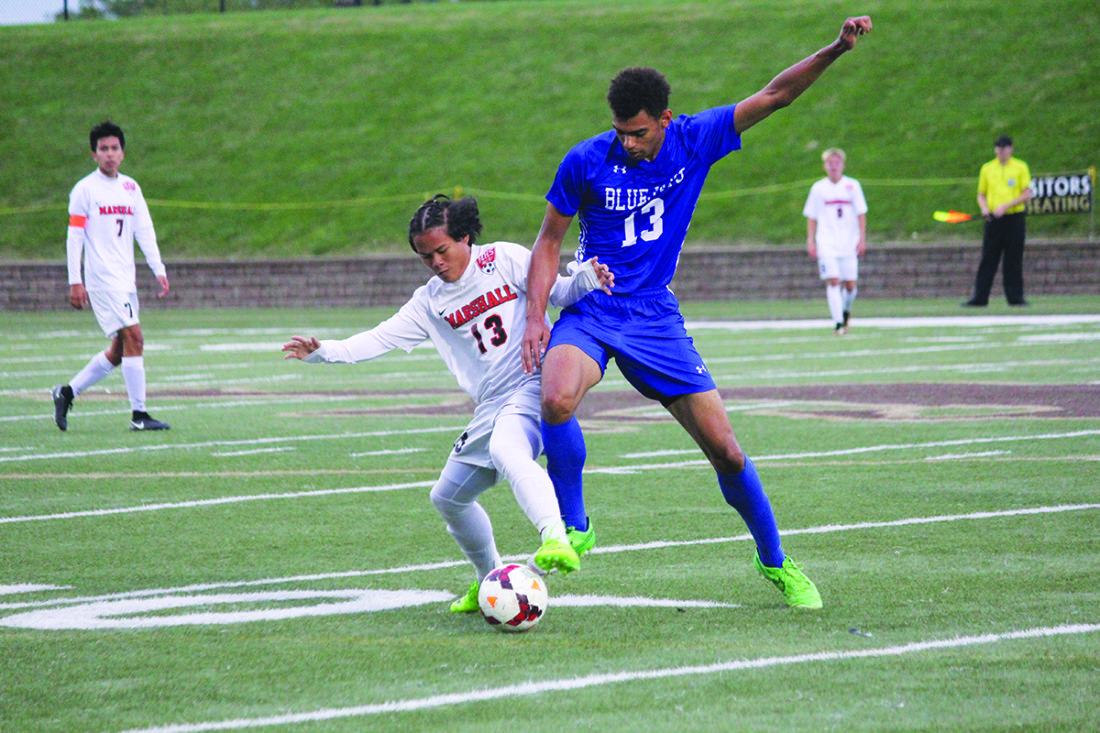 MARSHALL – The Marshall boys soccer team built an early first-half lead against Central Minnesota Chrisitian on Monday night, but a pair of second-half goals – including one in the final minute of play – from the Bluejays spelled heartbreak for the Tigers as Marshall fell 2-1 at Mattke Field.

After the majority of the first half saw neither team find the back of the net, the Tigers were able to break out the scoring when Loving Stee booted one in with 7:33 left to give Marshall an early 1-0 lead. That score would hold until the halftime break.

The start to the second half would mirror the first, with nobody adding to the lead for the Tigers or anyone knotting things up for the Bluejays. CMCS would finally find an equalizer, though, getting a goal with 6:46 left to make it 1-1.

Neither team would be able to get one in the net throughout the next several minutes, as the game looked destined for an overtime period. But with 32 seconds remaining, the Bluejays were able to draw a penalty kick opportunity against the Marshall defense. CMCS delivered on the close-range chance, putting one in the back of the net for the go-ahead goal, and Marshall would fall in the final seconds.

Tigers coach Matt Versaevel said he liked that his team was able to maintain possession throughout the majority of the game, but CMCS just got a couple of chances late and capitalized on them.

“We maintained possession of the ball for the majority of the game, it was just right at the end there they got a lucky breakaway where defensively we weren’t quite together and they put it in,” Versaevel said. “The other one was a PK which is pretty much a free goal.”

Versaevel said the key on the offensive end was their ability to draw out the defense and move the ball in the midfield.

“When we would move the ball in the midfield and try and draw out the defense, it did work, we’ve just got to take more shots and get more on frame,” Versaevel said.

Marshall will face Worthington on Thursday at 6:30 p.m. Versaevel said their biggest takeaway will be working on their defense as they have a tough task with the Trojans.

“For sure we have to work on our defense a lot,” Versaevel said. “We’ve got Worthington in their place so it’s going to be a tough game being able to stay with them and be competitive.”