“Justine had such a great season, and we certainly relied on her to do many different things for us on the court,” D-B head coach Doug Wold said. “She has a knack for getting to the basket, and she can finish around the basket so well. I thought as the year went on she really improved her vision in the half-court and found open teammates for easy shots.”

Lee capped her high school basketball career with 1,908 points, becoming the all-time scoring leader (in boys and girls history) at Dawson-Boyd. Lee was also named one of the top 40 best players in the state and will take part in the All-Star Series today.

“Justine is very sound fundamentally and was able to control a game because the ball was in her hands much of the time and we trusted her to make smart basketball decisions, and she did that,” Wold said. “She had a very impressive basketball career, but she is also a great student and great role model for the younger kids in the school.”

Buysse did a lot of things well en route to the Tigers’ second-place state finish. Buysse not only handled the ball and set up the offense for Marshall (29-3), she also contributed 12.8 points and 4.2 rebounds per game along with swiping 102 steals and dishing out 68 assists.

“Sarah’s speed really gave opponents fits,” Tiger head coach Dan Westby said. “Her ability to go hard to the basket really put a lot of pressure on the opponents’ defense. If she didn’t finish drives, she converted at the free-throw line, hitting on 123 of 159 attempts (77.4 percent). In addition, we often put Sarah on the opponent’s best perimeter scorer.”

Westby noted that perimeter defense led to Marshall being the top-ranked team in Class AAA, allowing a mere 38.6 points per game. Buysse’s speed was also instrumental in the Tiger’s press and in the team’s fast-break offense, he said.

Buysse, who will also be playing in the All-Star Series today at Carlton College, finished her high school basketball career with 1,105 points.

Frank, the lone junior among the senior-laden first team, emerged as one of the area’s top post players, recording an average 24 points and 14 rebounds per game for the Rabbits (19-10).

“Morgan is a phenomenal player,” Wabasso head coach Neil Dolan said. “She’s a good worker and she has a great attitude. She brings it to practice every day and wants to be successful. She’s a great leader.”

With Frank leading the way, Wabasso sparked a solid post-season run, one that finished just shy of the state tournament with a loss to Minneota in the Section 3A finals.

“Morgan led us in scoring and rebounding and was our go-to player, especially in the last eight or nine games,” Dolan said. “Teams respected that and put two or three girls on her, but she still would get a double-double. She can shoot from the outside and can rebound from the inside, so she’s not one-dimensional.”

Sand contributed to her turnaround team in a big way, producing a 13.7-point, 13.9-rebound average in addition to coming away with 124 steals, 58 assists and 38 blocks for the Sting (21-8), who also finished one win away from the state tournament this season.

“Chyanne is arguably the best overall girls basketball player in the history of YME/Granite Falls/Granite Falls-Clarkfield high school,” YME head coach Randy Haakenson said. “She did so many things very well. I believe she is the most tenacious and determined player I’ve ever coached.”

Sand closed out her basketball career as the all-time leader in rebounding (893) and steals (320) in addition to being the sixth-highest scoring leader (974) in YME/GF/GF-C history.

“Chyanne was the impetus to our full-court pressure, and her aggressive rebounding made our team a physical presence in most every game,” Haakenson said. “She was explosive into the passing lanes. She fought for every loose ball. Her career numbers are a reflection of what she represented on the court.”

Saugstad brought a lot of positive contributions to a well-balanced Marshall team. She chipped in an average 10.0 points and 5.1 rebounds per game for the Tigers, in addition to collecting 78 steals and 57 assists.

“Morgan is a tireless worker,” Westby said. “She uses her combination of grit and high basketball IQ in order to make up for the size differential she often gives up in the post. Morgan also has the ability to score from the inside or from the perimeter. She put a lot of pressure on the defense by being able to post people up or also possessing the ability to step out and hurt people with her perimeter shooting.”

Westby credited Saugstad for a being an inside key to the Marshall defense. Though only 5-foot-9, Saugstad was often asked to defend the opponent’s best post player, often giving away 6 to 8 inches in height, he said.

On March 20, 2015, Taylor Reiss needed to tap into a part of her game she wasn’t always used to employing: her leadership. Maranatha Christian had just triumphed over her Minneota Vikings in a grueling Class A state semifinal game at Williams Arena. All of Reiss’ teammates except fellow senior Emily Stienessen had exited the locker room. After five straight trips to the state tournament, Reiss faced the prospect of her final high school basketball game. She needed to get everyone on board in order to end their season, and her career, with a victory.

For her eye-popping stats and leadership on a young Minneota team, the Marshall Independent selected Reiss as the 2014-15 All-Area Player of the Year – the third straight year she’s won the award.

Even if you never saw her play, you’ve probably heard the name Taylor Reiss if you follow Minnesota girls high school basketball. Her name can be seen near the top of the list in numerous statistical categories. She is one of 13 female basketball players in Minnesota to score 3,000 points in their high school career. She holds not only first place for best field goal percentage in a season in state history, but second as well. She helped power Minneota’s 145-13 record the past five seasons. The Vikings didn’t lose a Camden Conference game in the last five years.

However, the 2014-15 season required her to elevate her game off the court. Reiss knew this season would be different; the Vikings lost a number of key veterans from last year.

“We’d been playing with those seniors since sixth grade, said Stienessen. “It was definitely difficult because we weren’t going to have them back.”

There was also adversity, as senior Payton Boerboom went down with an injury before the season began, adding to the Vikings’ challenge of getting back to the state tournament – clearly a goal for Reiss and her teammates at the beginning of the year. Reiss took the 2014 championship loss to Win-E-Mac hard, describing herself as a person who “doesn’t like losing at all.”

And every team the Vikings would face this year would put stopping Reiss, a 5-foot-10 forward, at the center of their game plan. Still, as a leader, she had to help her teammates improve if they wanted to return to the state tournament.

“This year I had to be more vocal as a leader and keep my teammates up, making sure I push them to be their best,” she says in room 209 at Minneota High School this past week. She’s sitting in a desk in the front row, more than two weeks since she played her final high school basketball game.

Minneota coach Chad Johnston expected her to step up before the season started.

“We really needed her to be a leader on and off the court. That’s an area where she grew this year. She became a great captain and a great leader. She needed to guide young teammates that didn’t have the experience,” said Johnston.

Reiss talked with her teammates more in practice, organized some group bonding and was more vocal on the court.

“She’s always been one to lead more by example – she kind of stepped out of that this year,” said Johnston.

That leadership came into play after the Vikings’ loss against Maranatha. Reiss and Stienessen walked out quietly. Johnston told them that he needed one more big game from them the next day, in the third-place contest.

“I need you two to be captains for one more day. We want to finish this thing with a win,” Johnston told them. They nodded and gave him a sincere look like they were ready. “They spent the rest of the day getting people where they belong,” said Johnston.

The feeling of playing her last game with her teammates, her friends, hit Reiss the next day, just before the third-place game against Lyle-Pacelli at the Gangelhoff Center.

“It didn’t settle in until before we were warming up for our game on Saturday. That’s when I felt it the most. You always think about that, but it doesn’t really hit you until right before your last game. That’s when it really hit me. I couldn’t imagine losing that game,” she says.

The Vikings went on to defeat Lyle-Pacelli, 65-59.

An All-Tournament team selection once again, Reiss showed her typical statistical dominance with 15 points and 17 rebounds against L-P. And while she didn’t score a field goal until there were just over 10 remaining in the game, she helped her teammates contribute as well by attracting L-P’s defense all game.

“We’re looking for the kids who have the best career, combining ability and leadership, all the factors that go into making a great player,” Miss Basketball Chairman Pat Barrett told the Independent this week. “Having the chance to watch a player over the last five years leading her team to five straight state tournaments, she is incredibly deserving.”

Even though Reiss watched the Class A first-place game from the crowd this year, she made peace with her season, and her career.

“This year I could sit and watch the championship game and I didn’t feel regret or anything because I knew we gave it everything we had,” she says. 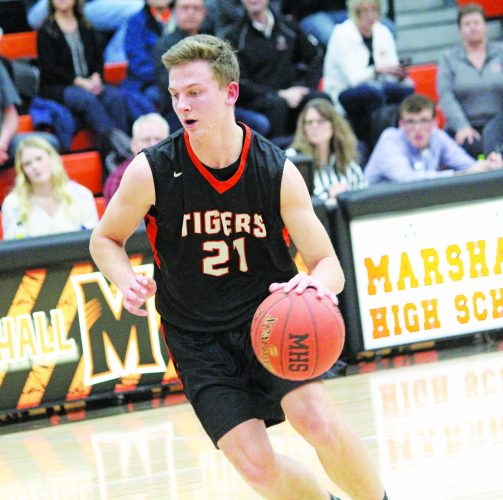 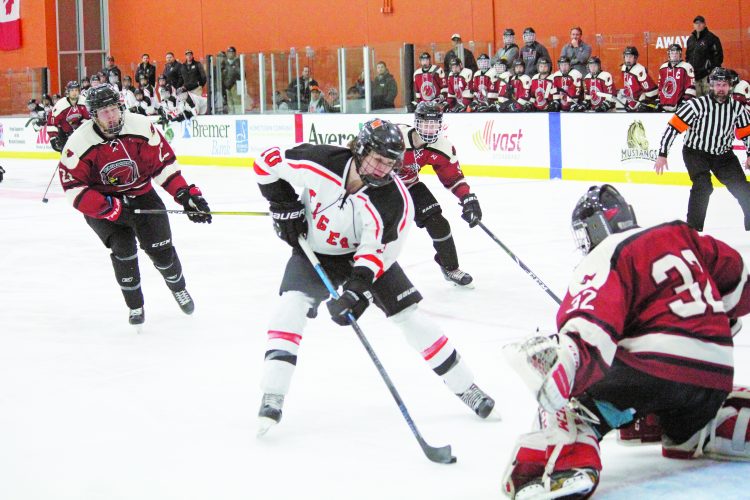 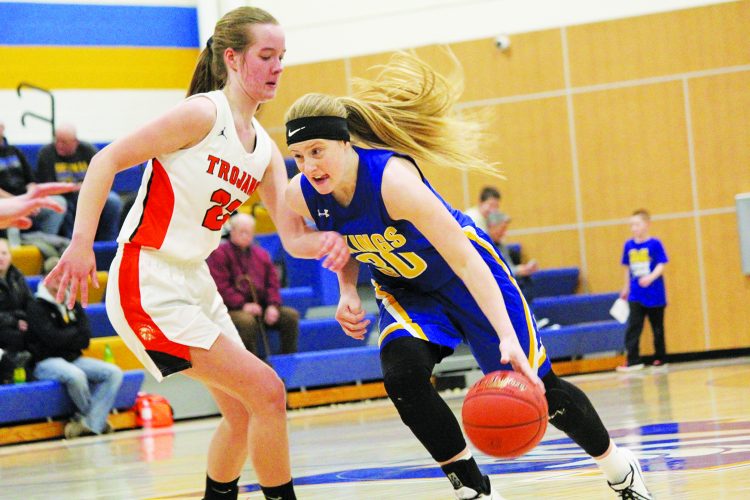