Finals week at Southwest Minnesota State is next week.

The SMSU softball and women’s golf teams concluded their seasons last weekend. The Mustang baseball team and women’s and men’s track and field teams are in the final week of regular season competition.

It is hard to believe we are coming to the end of another academic year and athletic season.

Great news from the Northern Sun Intercollegiate Conference, as Erin (Frye) Lind has been selected as the league’s fifth full-time commissioner and beginning her duties July 1. Lind joined the NSIC staff in summer 2001 and has served as the NSIC associate commissioner and senior woman administrator since 2005.

Lind is a 2001 graduate of Southwest Minnesota State University, earning her bachelor’s degree in sports management with minors in business management and coaching.

A starter for the Mustang women’s basketball team from 1998-2001, Lind was a first-team All-NSIC selection. She ended her career as the school’s seventh all-time leading scorer with 1,380 points and helped lead SMSU to the 2000-01 conference championship and its first NCAA tournament appearance.

For more information on this story, see Page 1B.

On Saturday, the SMSU Mustang Booster Club hosted the first “Mini Sports Camp” at the Schwan Regional Events Center and P.E. Gym. The event was a huge success with more than 70 campers participating in the camp.

A big thank you to all our staff members, coaches, membership drive committee members and student-athletes who took part in the planning and execution of this event. We were very happy with the number of kids who attended the camp and look forward to making the Mini Sports Camp an annual event to kickoff the Mustang Booster Club’s membership drive.

The Southwest Minnesota State University Department of Athletics and sponsors, Aramark, Hy-Vee and Pepsi, are excited to announce a new way for fans to interact with the Mustangs on their mobile devices.

The Mustang app, which is now available for download, will not only allow you to keep updated with SMSU athletics, but will also allow you to earn rewards for attending Mustang events and receive great offers from Aramark Dining Services, Hy-Vee, and Pepsi.

The app, which is compatible with Apple devices and Android-based platforms, can be downloaded by searching, “Mustang app” in the Apple App Store, Google Play Store or any other app stores.

Another way you can download the Mustang app is to follow these instructions: Step 1, text Mustangs to 80802; Step 2, click the link in the text message you received; Step 3, download it from Application Store; Step 4, register for the application; Step 5, start earning rewards.

The 29th annual David and Carol Drown SMSU Golf Classic will be held June 20 at the Marshall Golf Club.

The Golf Classic is the next Mustang Booster Club fund-raising event, and the Golf Classic Committee will be convening in the next couple of weeks to begin the planning for this great event.

For all your information on SMSU athletics, visit our website: www.smsumustangs.com.

The SMSU baseball team (21-20 overall, 12-13 NSIC) is coming off a four-game road sweep of Minnesota-Crookston on Saturday and Sunday in NSIC action.

The Mustangs’ doubleheader against Bemidji State, which was scheduled for Wednesday at Alumni Field, will be played today at Karras Park on the campus of Augustana College in Sioux Falls, S.D.

SMSU ends the regular season on Saturday and Sunday with a four-game series versus Northern State at Alumni Field. The games are scheduled to start at 1:30 p.m. on Saturday and 12 p.m. on Sunday.

The Mustangs are currently in ninth place in the NSIC standings, heading into the last six games of the regular season with the top eight teams making the NSIC tournament.

Good luck to Coach Paul Blanchard and the Mustangs as they look to earn their way into postseason play.

The Mustang softball team (15-30-1, 12-17-1 NSIC) ended their season last weekend, going 2-0 versus Minnesota State-Moorhead on Friday and splitting with Northern State on Saturday.

SMSU finished the season in eleventh place in the NSIC with the top ten teams making the NSIC tournament.

I would like to thank seniors Kaley Searcy and Jennifer Johnson for their hard work, dedication and commitment to the SMSU softball program.

The SMSU women’s golf team concluded its season on Sunday with a sixth-place finish at the NSIC Championships at Dacotah Ridge Golf Club in Morton.

The first two rounds of the championship were played last October at The Classic at Madden’s in Brainerd.

Abby Gruber shot a 20-over 92 on Sunday and finished 31st overall with an 80-over 368. Megan Will, who did not compete in the fall portion of the championship, shot rounds of 98 and 91 this weekend.

Wagner led SMSU during the season with an 85.5 stroke average in 16 rounds, including a pair of top five finishes.

I would like to thank our seniors Rachel Patnoe, Marissa Campeau and Trisha Kienitz for their hard work, dedication and commitment to the SMSU women’s golf program.

The SMSU women’s and men’s track and field team’s next competition will be at the Howard Wood Relays on Friday and Saturday in Sioux Falls, S.D.

For the women’s team, Rylee Armstrong competed in the NSIC Heptathlon held at Swisher Field hosted by Northern State University on Sunday and Monday, placing 14th with a total of 3,389 points. On Monday, Armstrong finished fourth in the long jump with a mark of 16-feet, 11 1/2-inches, eighth in the javelin with a throw of 88-3 and 14th in the 800-meter run in 3-minutes, 17.53-seconds

No one was able to provide the correct answer to last week’s Mustang Hoofprint’s Trivia Question: Who was the last SMSU female student-athlete to be awarded the Willis R. Kelly Scholar-Athlete Award winner as the top female scholar-athlete in the NSIC?

In 2002, Christy Kubat (Brusven) was the Kelly Award recipient for her academic and athletic accomplishments at SMSU.

Who holds the record for the longest triple jump in SMSU men’s outdoor track and field? 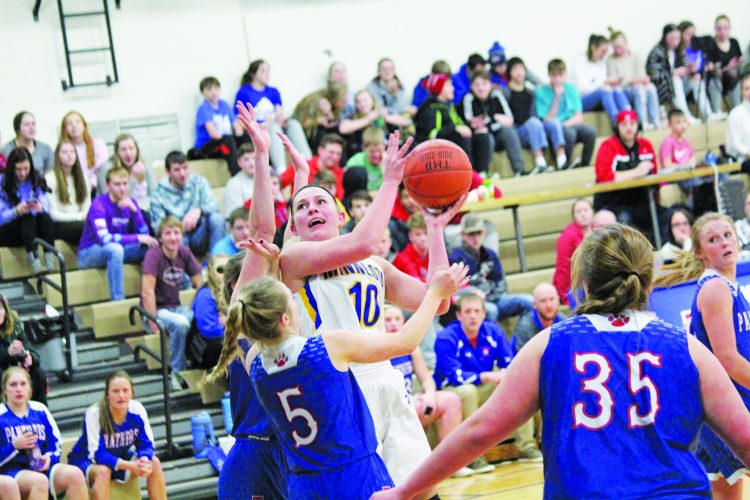