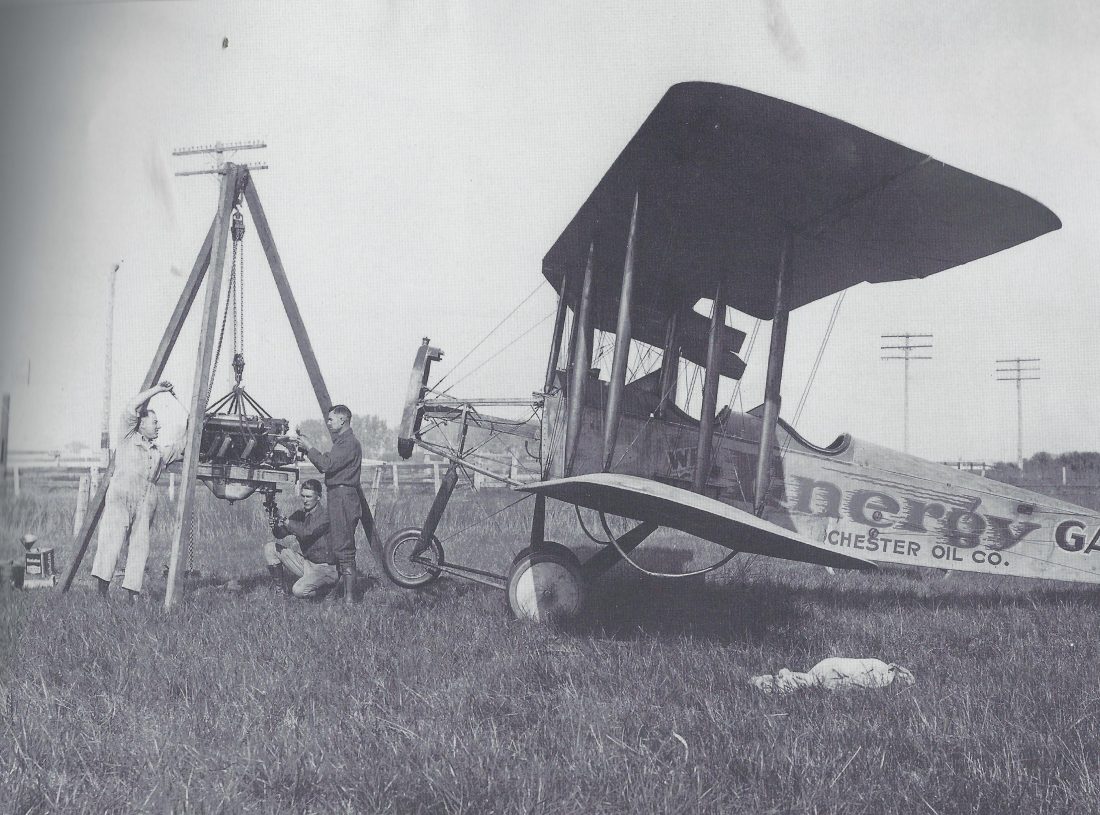 Irwin Alfred Stellmacher was born May 1, 1896, in Renville to Henry and Louise Yunker Stellmacher. In 1906, he moved with his parents to Marshall where he finished school. In 1917, he went to the Rahe Automobile Training School in Kansas City and received his diploma on June 15, 1917. On April 7, 1918, he entered the United States Army and was sent to the University of Cincinnati for further training.

He was then sent to France during World War I. After his discharge, he returned to Kansas City and was employed by the Packard Motor Car Company. In November of 1921, he returned to Marshall. On Nov. 11, 1925, he married Dolly Thomas in Tracy by the Rev. Frederick C. Boller. Following their marriage, Irwin continued to work as a mechanic in Marshall until retiring and moving to Cottonwood in 1940. Dolly passed away on Feb. 14, 1971, and Irwin passed away on Oct. 31, 1984.

Irwin is best remembered as a mechanic, inventor, and barnstormer. He was known as an aviation pioneer and barnstormer in southern Minnesota from 1923 through 1936. On Oct. 5, 1923, he received delivery of his first airplane, a J-1 Standard biplane with as Hispano-Suiza engine that he later swapped out for an OX-5. During the week, Irwin worked as an auto mechanic, and on weekends he would barnstorm, giving lessons and rides to people in southwest Minnesota.

He had posters printed and hung them around in towns. He charged $2.50 for adults and $1.25 for kids for the sightseeing rides. Irwin operated his plane out of a Marshall pasture that later became Ryan Field. He was given the opportunity to pilot the “Stanolind” a tri-motor owned by the Standard Oil of Indiana for about 10 minutes in 1928 during the dedication of the airport in Mankato. Irwin had given M.W. Dock, a manager for Standard Oil, his first airplane ride in Marshall several years earlier.

In the book, Minnesota Aviation History 1857-1945 by Noel Allard and Gerald Sandvik, there is a section where Irwin is mentioned and is quoted, “I remember Balaton, Minnesota on a Sunday, I kept flying until it was pitch dark. You couldn’t see the ground, but people kept paying $2.50 to go up and see the lights of Marshall and other towns. You couldn’t see the ground, so I’d land by car lights.”

District manager It’s never too early to start planning for retirement and our online tools can help. Go ...

The Rev. Jerome Anderson then came to take over the Minneota and Lincoln County parishes. He was not enthusiastic ...

The moral relativism of my tribe

Nobody really wants to be honest these days. If they were honest, they would have to admit a few inconvenient ...

Five reasons to get a jump on filing your taxes

Filing your income tax return is an easy task to put off until a later time. If you are like most people, you often ...

Currently, there are two temporary displays featured at the Lyon County Museum. “The How to Talk Minnesotan” ...