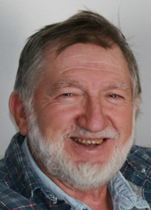 Joseph John Rolling, 85, loving husband, father and grandfather was born to Paul and Alice (Logue) Rolling in Walnut Grove, on Dec. 7, 1934. In 1941, the family moved to their farm by Hawk’s Nest Lake, Ivanhoe.

Joe graduated from Ivanhoe High School in 1953, enlisted in the Air Force in 1954, and saw service as Airman First Class in Minneapolis, and at the U.S. Air Force’s northernmost base, Thule, Greenland.  He graduated from South Dakota State University in Brookings in 1962 with a BS in agriculture. He began work for the USDA as a commodity grader in Minneapolis, Florida, and California. In 1964 he joined the Peace Corps, and worked in La Mata, Panama, until 1966, then volunteered as co-director of San Benito Junio High School in Volcan, Panama until 1973.

While in Volcan, Joe met a girl from Kansas City, Betty Thompson. They were married at Cure of Ars Parish in Overland Park, KS, on Oct. 25, 1969. Together, they served in Panama where they began their family.

In 1974, he became a management agronomist for the U.S. in the Canal Zone. In 1976, Joe moved back to Arco to commence a hog farm operation. In 1985, he converted his farm to a mushroom farm and became licensed in insurance and security sales in MN, taking employment with A.L. Williams, Inc. Joe continued to work as a tax accessor for Lincoln County until his retirement.

Active in the VFW, NFO, Pork Producers Association, Mushroom Growers Association, Boy Scouts, 4-H, MCCL, Groundswell, and FareShare, Joe was also a School Board Member from 1983-1989. He attended Demontreville Retreats for over 20 years and loved the Knights of Columbus in which he served as Grand Knight and treasurer.

Blessed be his memory.