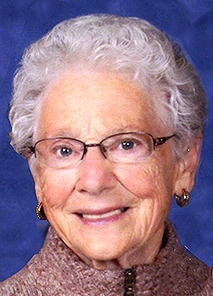 MARSHALL — Services for Dora Schultz, 87, of Marshall, will be 11 a.m. today at St. Christ Evangelical Lutheran Church in Marshall. Burial will follow in the Marshall Cemetery.

Visitation will be one hour prior to the service at the church.

Dora June Willard was born March 11, 1932, to Porter and Leona (Smiley) Willard, in Tracy. She attended school in Marshall, graduating with the high school class of 1950. Dora was later baptized and confirmed as an adult at Christ Evangelical Lutheran Church in Marshall.

On May 20, 1951, Dora was united in marriage to Donald Schultz in Marshall. They made their home in Lynd and then south of Marshall on the family farm. Dora was a loving wife, homemaker, and mother to their six children.

Dora was a proud member of Christ Evangelical Lutheran Church in Marshall, where she helped with altar care and communion care, taught Sunday School, was a leader for the Girl Pioneers, and was active in Missions. She enjoyed the ladies’ Neighborhood Card Club meetings. Her other enjoyments in life included reading, embroidery, watching “Wheel of Fortune,” cooking, and spending time with her family – especially babysitting her grandchildren. She loved to teach the next generation how to make doughnuts from scratch and was very proud of her large family and the festive get-togethers for the holidays.

Dora was preceded in death by her parents, Porter and Leona Willard, and infant brother, Francis Willard.