Health care workers urge public to keep up on immunizations 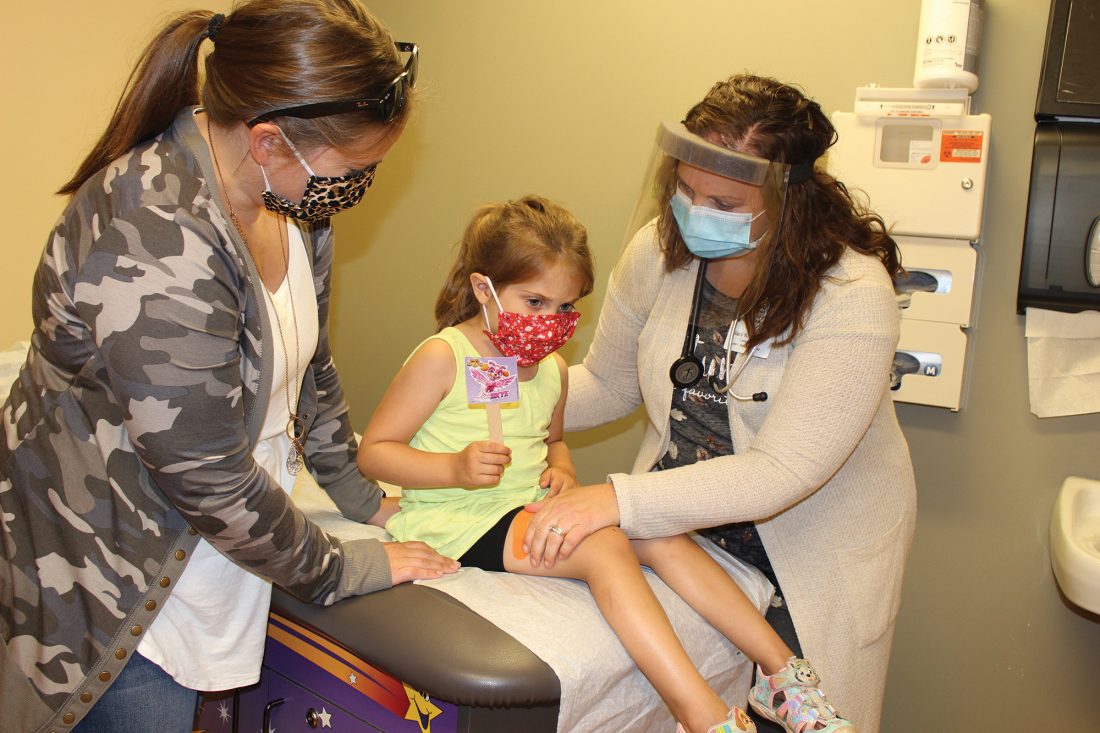 Submitted photo Katie Fragodt and Ivelyn Fragodt of Cottonwood made a visit to Avera Marshall this week. Health providers are urging people not to neglect important parts of health care like well-child visits and immunizations.

This year, COVID-19 has taken up a lot of the focus in health care. But even as the world deals with a new virus, it’s important not to neglect other needed health care and preventative care. One important example: staying up to date on immunizations.

“We’re really encouraging people to come in and have well-child exams,” and not to fall behind on immunizations, especially as the new school year approaches, said Sara Kraft, a pediatric nurse practitioner at Avera Marshall. “In the midst of COVID, we do not want people to have to deal with anything else.”

According to data from the Minnesota Department of Health and the Minnesota Immunization Information Connection (MIIC), the numbers of children getting recommended vaccinations have been down this year, likely due to factors like COVID-19 concerns and stay-at-home orders. For example, MIIC data said 562 Minnesota children under age 2 received the measles, mumps and rubella (MMR) vaccine the week of March 23, compared to 1,216 at the same time last year.

The number of children receiving MMR vaccines dropped sharply in late March, which was around the time Minnesota implemented a stay-at-home order and health providers put a temporary hold on non-essential doctor visits. However, while the numbers of children being immunized are on the rise again, they still haven’t reached 2019 levels, MIIC data said.

Kraft said the data seemed to match what she’s seen at Avera Marshall over the past few months. When there was more emphasis being placed on staying home and practicing social distancing, fewer parents and children were making clinic visits. At that time, she said, “We were only seeing pediatric patients age two and under.”

“Now, it’s been very busy,” she said. “But we still have a large gap of time to make up.” From late March until early June, some area children might have fallen behind on their immunizations.

Immunizations are important because they’re a safe way to help build children’s immune systems against diseases like measles, mumps, tetanus and pertussis (whooping cough), Kraft said. A vaccine exposes a person to a small amount of killed or weakened virus, and allows them to develop antibodies against the virus, the CDC says.

COVID-19 may be getting a lot more attention lately, but immunizations against other diseases are still important for the health of children and the public.

“We don’t want a resurgence of any of these illnesses,” Kraft said.

“We missed out on a lot of those kids preschool age on up,” Kraft said. “Now, we’re trying to get everything scheduled.” However, she said Avera Marshall has had time to get organized, and has the needed protective equipment and safety measures for families to come in for pediatric visits. Patients with respiratory symptoms are seen in a separate area from patients without symptoms, and people are still being screened at the entrances to the Avera Marshall campus.

If parents have questions about what immunizations their children might still need, they should contact their primary care physician or pediatrician, Kraft said. The nurse at your child’s school could also help find their vaccination records, she said.

“A lot of schools will also send out letters,” she said. Typically, the years that children enter kindergarten and seventh grade are ones where schools will ask families to get children immunized, she said.

Other good resources on immunizations, including recommended immunization schedules, include the MIIC, the American Academy of Pediatrics, and the CDC, Kraft said. Avera also has more information on immunizations online at avera.org/shots.