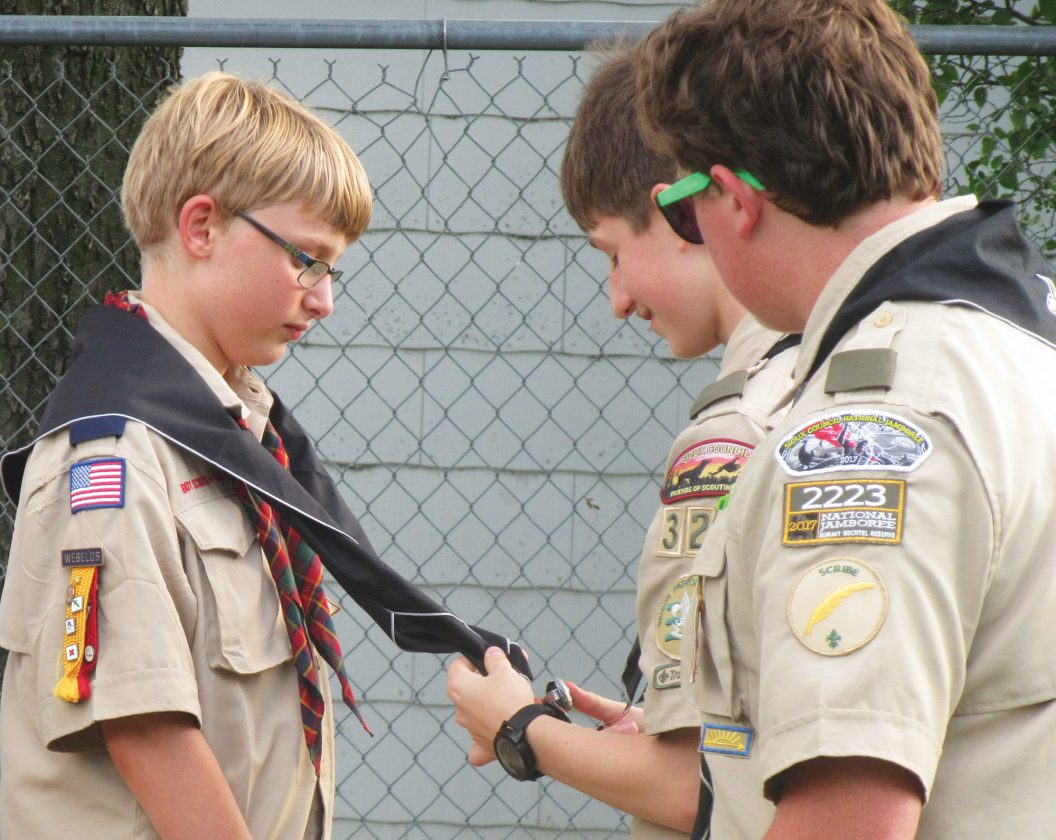 Photo by Deb Gau Marshall area Cub Scout Pack 320 held a “virtual campout” in May, as part of the requirements for members to earn the Arrow of Light award. This week, four Webelos members of the pack including Ethan Shuckhart (above, at left) made the transition to Boy Scouts, and were welcomed by older members in a ceremony.

MARSHALL — Going camping is a time-honored tradition in Scouting — but as with a lot of traditions this year, it had to change to go along with COVID-19 precautions. Rather than let social distancing put a stop to a planned campout, a pack of Marshall area Cub Scouts got creative, with a “virtual campout.”

The boys of Cub Scout Pack 320 had been working for a long time to fundraise and organize for a special campout, said parent Marilee Thomas. The campout was one of the last requirements for Webelos in the pack to earn the Arrow of Light, the highest award in Cub Scouts. The campout was postponed more than once, and then the COVID-19 pandemic hit, Thomas said.

It was hard thinking that the campout might not happen this year, Scouts said.

“I was looking forward to it this year, and I was kind of disappointed,” said Ethan Shuckhart.

Then organizers came up with a solution: a virtual campout. At first, pack member Cody Rauch said, “I thought it was going to be like, a call thing,” like a lot of other “virtual” events have been. But the virtual campout was a lot more fun.

“We went camping and did some fun stuff,” said pack member Josh Arends.

On May 29, each pack member set up a tent and camped out with their own families to follow social distancing. But they all took plenty of pictures and videos to share online with their fellow Scouts.

“We had s’mores on the fire, and we just camped in our yard,” said pack member Max Johnson.

Pack member Tyler Ingebrigtson said his family went to Twin Lakes to camp out. They got to do some fishing, and grilled hamburgers over the fire.

The night’s activities included cooking dinner over a campfire, a scavenger hunt, and even an evening program of videos to share with pack members.

For the scavenger hunt, boys found a variety of items from nature, as well as pieces of trash they could recycle.

“For the scavenger hunt, me and my mom found a bottle by the lake,” said pack member Dante Thomas.

Dante and his family also tried cooking pizzas in a Dutch oven, putting in the dough over some parchment paper, and then dropping in the toppings. It worked, he said, but the oven wasn’t that big.

“It was a lot more fun than I thought it would be. I enjoyed it very much,” Shuckhart said of the campout.

“I liked having the fire, and actually all of it,” Johnson said.

While the campout was fun, it also helped four Webelos earn their Arrow of Light. On Monday, the boys held a year-end award ceremony in Marshall, and saw Tyler Ingebrigtson, Cody Rauch, Ethan Shuckhart and Dante Thomas make the transition to Boy Scouts.

The summer isn’t over yet, and Pack 320 still has events planned. Because the virtual campout went so well, the boys might even be having another one later this summer, Marilee Thomas said.