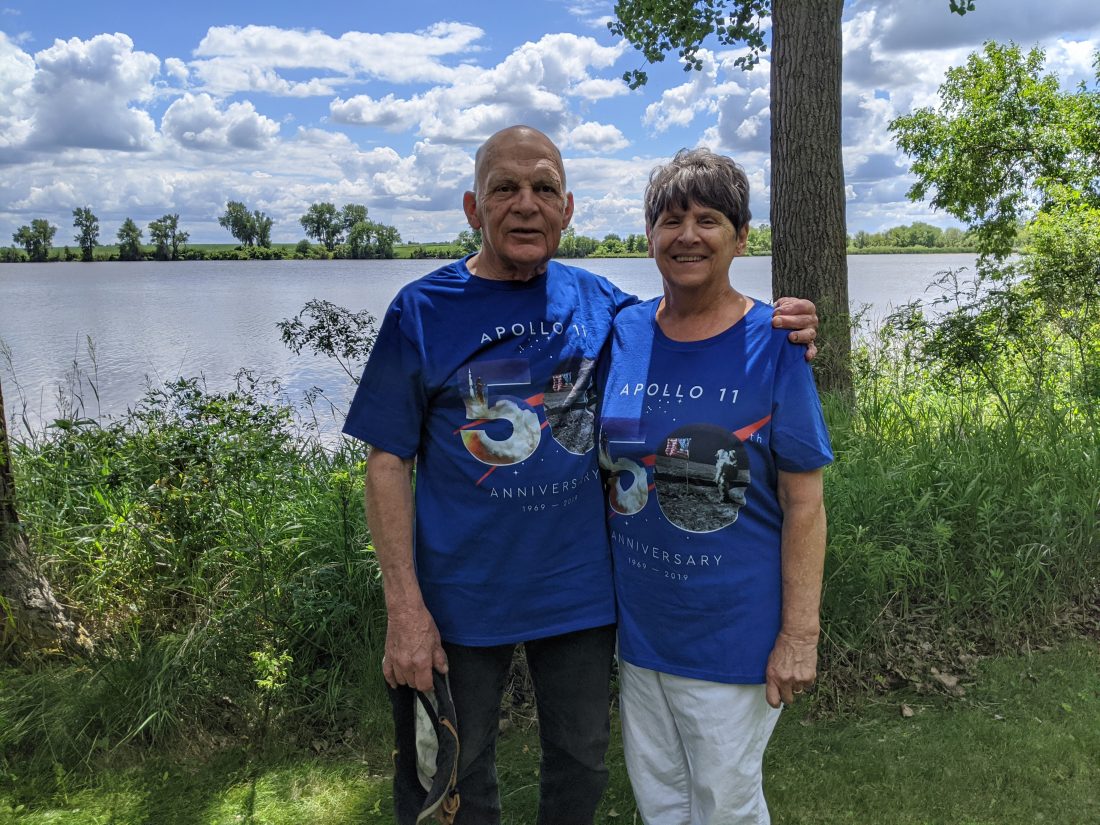 Photo by Mike Lamb Ron and Marge Mann pose in front of the lake in their backyard of their home located in rural Marshall.

MARSHALL — It was more than 50 years ago, but they remember it as if it was yesterday.

It was 1968 and Ron Mann was a 21-year-old U.S. Army Lieutenant stationed at Patrick Air Force Base in Cocoa Beach, Florida. Like the other young men stationed at the base, he watched the nurses arrive for duty. Mann had his eye on a 21-year-old lieutenant nurse who grew up in Milwaukee, Wis.

“She has to like beer. She can’t be all bad,” Ron Mann said, reminiscing on meeting the woman he would eventually marry.

“Everybody on the base knew of him,” Marge Mann said. “I actually went out with his roommate the first time and then I started going out with Ron and it was just meant to be that way. But everybody knew him and he was like one of how many Army guys on the base?”

Ron and Marge Mann shared the military experienced and later raised a family in Marshall and recently celebrated their 50th wedding anniversary.

“I was Minneapolis born and raised,” Ron said. “My dad grew up in Redwood Falls and my mom was originally from Hendricks. Being here (Marshall) wasn’t a strange thing.”

Ron attended University of Minnesota, but found himself “floundering.”

“Me and chemistry didn’t get along,” he said.

Facing the prospect of being drafted, Ron decided to join the U.S. Army in 1966, even though he spent time in the Air Force ROTC.

“We will make you an officer. You are going to be in good shape. What do you think about flying,” Ron remembered the Army recruiter saying. It sounded good to Ron.

“We will make you an air ops warrant officer flight pilot. So you go through training at Ford Wolters, Texas. And part of that of the training was going to be at Fort Polk, Louisiana. So I enlisted, RA16973983. And I had qualified for pilot training with the Air Force. But when I got down there they said my eyes weren’t good enough,” he said.

“I’ll bring you back after you graduate. In six months you become a lieutenant. You will have a dream sheet you can fill out. ‘Where do you want to go?’ You had three choices. And so I didn’t want to go to Vietnam. People were not coming out of that place real good. A huge population of our age group was gone. The males were in the military. They were getting shot and returning in bags. It wasn’t a good deal.

“I put in Germany and Alaska. I had a third choice,” he said. “I just put down Cape Kennedy Air Force Base. I thought there’s got to be some Army guys. There was one slot for one lieutenant at Cape Kennedy (Patrick) Air Force Base — transportation officer. Ships, boats, planes, trucks. And so I spent a year there. I got there in August, September. Then Marge showed up in December.”

“I grew up in south Milwaukee, studied at Rochester at the Mayo Clinic and I wanted to be a flight nurse. All the branches except the Air Force came around and were enrolling people,” Marge said.

Many of her classmates took the Army offer and eventually ended up in Vietnam. She chose the Air Force.

“I got stationed at Cocoa Beach (1969) and it was mostly like a military hospital for the people that lived on base and the servicemen that were returning. And I was there for Apollo (1). I got to see it on the cape and watch while the thing took off. I still remember this — and this is really weird — it was like science fiction stuff. And some of us thought that perhaps when those people landed there would be some monsters there,” Marge said.

“The night they landed, us nurses went into an empty patient room. We only had a black and white TV and we were waiting. And then the pictures came on and we were all scared that maybe there were some monsters. And I was on the cape for the actual liftoff. I had nothing to do with the rockets, but that was one of my proudest moments of my life. It was so cool. A lot of military people and everybody were cheering and screaming. It was an amazing thing.”

Unfortunately, Ron was not there to witness the Apollo liftoff with Marge. After a year as transportation officer in Patrick Air Force Base, he ended up in the place he was trying to avoid — Vietnam.

“With all my ocean-going experience. All the shipping background I had from Cape Kennedy. That fit beautifully with Saigon support command, which was a big ocean-going depot receiving place for goods,” he said.

He was later transferred to Cam Ranh Bay. He remembers being told that he was going to 36 Transportation Battalion.

“And I looked outside the window. You should never look out the window. There’s this jeep sitting out there with a machine gun mounted on top with antennas on it and the back of the spare tire said 36 Trans Battalion. And I said, ‘Oh no.’ So that’s what I did. I did convoy over the central highway in Vietnam. They shot at me all the time. I didn’t shoot back. My job wasn’t to shoot back. My job was to shift gears and keep going,” Ron said.

“You never know whether the next bullet is going to come for you, or around the corner is an improvised explosive device, or whether a rocket is going to be coming in. All the time you are in a danger zone. And so you wonder what’s gonna happen. And so I was always with the 45 and I was watchful.

He shared feeling uncomfortable changing a tire on the road because “you didn’t know if Charlie was gonna sneak up.” He said he has some close calls of bullets heading in his direction.

“Never had any bullet holes in the jeep. Just bad shots. Part of the deal with living in Vietnam, super short life span for people that lived there. Life doesn’t have much value. So they are just going day to day just tying to exist until death. So the Vietcong wold come at night and they would round up villagers and say ‘OK, if you don’t shoot at the Americans — we will give you the gun to shoot to shoot at them — we’ll take the arms off your first born and then we’ll rape your wife for good measure,” Ron said.

He explained that the gun would be wrapped in an oil cloth and hidden in the rice paddies. When a U.S. convoy came along, the villager would unwrap the gun, climb a hill, and shoot.

“I should have been killed somewhere along the line, but I didn’t.”

But one day his convoy drove through an area just hit with Agent Orange.

“One day there was fog. All of the sudden there were weeds all over the road. We’re just kind of cool. I didn’t know they had fog, but they don’t. There’s no fog — defoliated,” Ron said.

Later, at age 42, he developed colon cancer. And their son was born with mental retardation and seizures disorder. While they have their suspicions, the Manns said the government refused to link his agent orange experience and the cancer and their son’s issues.

While Ron was in Vietnam, Marge fondly remembers ham radio calls from Vietnam.

“To get a free call from Vietnam from the other side of the world was just astonishing,” Ron said. “The one thing that is unusual about us is we experienced a lot fo military experience together, which is kind of unique. For one year we were together.”

However, Ron said at the time he was in Vietnam, she didn’t necessarily understand his experience with the convoys.

“I didn’t know he was getting shot at,” she said.

When Ron returned from Vietnam, he proposed to Marge.

“I came back from Vietnam. I enrolled in school (University of Minnesota). I then jumped in my convertible and drove straight to Florida. Got engaged to Marge. She had been waiting for me, very patiently, very diligently, honorably,” he said.

Both laughed about what Ron’s roommate when stationed in Florida said.

“If you don’t marry her, I’m going to kill you,” Marge said. “No pressure there.”

“If you don’t give her a ring before you leave …” Ron said. And then Marge finished.

“… Then there was going to be trouble.”

Instead the raised a family of xxxxx, mostly in Marshall. They celebrated their 50th wedding anniversary on xxxx. And their family placed an ad in the Independent:

“We are so proud of you and the amazing family your relationship has grown. May you have many blessings, cherished moments and happiness for decades to come.”