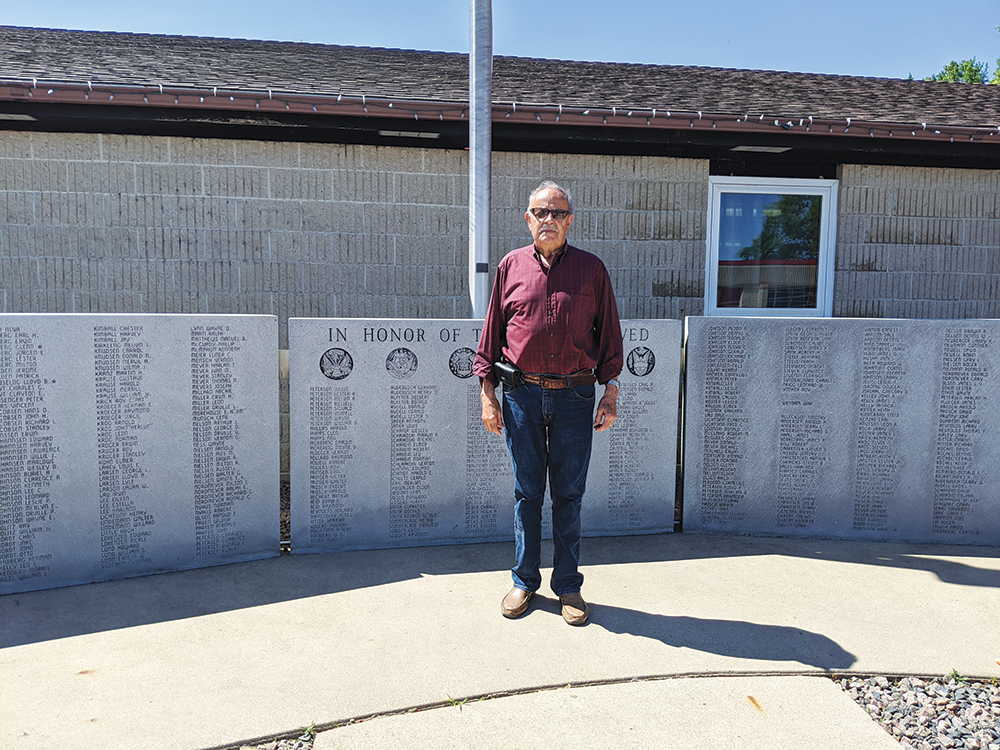 Photo by Mike Lamb Don Evers stands in front of the Military Veterans Memorial outside the Lake Benton American Legion. His name is inscribed on the memorial as a U.S. Army veteran who was stationed in South Korea from 1958 to 1959.

LAKE BENTON — The decision to join the U.S. military was an easy one for Don Evers.

“I went because there was nothing to do on the farm,” Evers said, looking back to 1958 after he graduated from Lake Benton High School.

“I just decided one day right after Christmas. I told my dad, I think I’m going into the service. He said, ‘might as well, you are going to get drafted sooner or later.’ Because the draft was big then.

“So I went to Sioux Falls, me and two other guys went. One guy didn’t pass the physical. The other guy — we got sworn in — he didn’t take a step forward. He went back home. He got drafted later. So I went in by himself,” Evers said.

After U.S. Army basic training in Colorado, stints at Fort Chaffee in Arkansas and Fort Lewis in Washington, Evers was on a ship headed to South Korea.

“We landed in landing crafts on Inchon,” Evers said.

Inchon was made famous in 1950 when U.S. Marines made a surprise landing on the west coast of Korea, about 100 miles south of the 38th parallel and 25 miles from Seoul. The operation involved some 75,000 troops and 261 naval vessels and led to the recapture of the South Korean capital of Seoul two weeks later.

Evers landing at Inchon was a decade later. The fighting ended with the armistice in 1953 that restored the original boundaries between North and South Korea.

“I tell you, you talk about a scared kid. I was too scared to do anything,” Evers said. “They drop you off in the foreign country. I didn’t know a word in Korean. It was scary.”

He received his orders that told him where was to report for duty.

“They told me go down to the railroad station and catch a ride. I had no idea where I was going. And they (train conductors) did holler at the stop where it (train) was. I couldn’t understand a word they were saying. And this South Korean guy, he looked at me and said, ‘you are new here, aren’t you?’ I said, ‘yes.’ He talked English. And he said, ‘where are you heading?’ And I showed him my orders.”

The South Korean offered to let him know when the train arrived at his stop, which was the city Pusan, which today is Busan.

“And he said, ‘be ready to get off because this train doesn’t stop very long,” Evers said. “The train was so crowded. There no seats to sit — everybody was standing. And he said, ‘Pusan is coming up, get ready.’ So I grabbed my duffel bag, hopped off the train and still didn’t know where I was supposed to go.”

Evers was in luck again, because he found another GI who hailed a taxi for him and sent Evers in the direction of Taejan military base.

Evers ended up spending 13 months in South Korea in a unit that advised the South Korean army.

Evers served as the secretary to the general.

“He had a ’57 Chevy military vehicle. Every morning we would ride out to the Korean War base out there. And when we go done, you know, everybody salute. I asked him, ‘am I supposed to be saluting too?’ He said ‘no.’ I did other jobs. I was mail clerk — little odds and ends,” he said.

He also worked in the dispensary.

“Ask me how a clerk typist can give shots? They sent me down to the aviation. I had to give these officers shots. They gave me one day’s practice with an orange,” Ever said.

He also joked with the pilots, sometimes bending a needle into a cork screw and showing it to the pilots. But they offered him rides on their helicopters if he would not ground them for the day because of the shot.

“This one guy always gave me a ride. He would scare the hell out of me. He would take me way up and turn off the blade. Sort of glide, float down,” Ever said. “These bubble helicopters — no doors — you sit on the seat and everything is wide open. They’re more fun to ride. They are scary. I enjoyed it.”

Evers also was assigned to take “secret stuff” to Seoul, which was about 100 miles north.

“I had top secret clearance,. They handcuffed it onto your wrist, this big briefcase. You got on this train and a way you go. They gave me a gun — pistol. I never checked if it was loaded. I tell you what, they just have to cut my arm off and they got it,” Evers said. “I had no idea what was in the case. It was a big flat case — maps and stuff.

On his time off, Evers taught an English class to South Koreans after being approached by some bartenders and waitresses at the club. He would hold the classes during his spare time in the evening.

“It (English) was my worst subject in school,” Ever said with a laugh. “I showed them the alphabet. I had 10-12 South Koreans come in and learn some English.”

Evers keeps an eye on the today’s developments in the Koreas. He believes North Korean leader Kim Jong-un is “all talk.”

“South Korea is so built up, they would wipe North Korea off the map in one day,” he said. “I don’t think you ever going to see them go south. I feel sorry for the North Koreans, because they are so backward. They never built up,” he said.

“South Korea can strand on its own, and I feel I was part of it. We were there right after the war. We set them up and got them going.”

Today, Evers is active with the Lake Benton American Legion where he serves as financial officer. He also is on the honor guard.

“We play at every military funeral. I play the trumpet. We march in parades,” he said.

Evers said he enjoyed the military and believes everybody should serve.

“They should put in a year or two in the service,” he said.