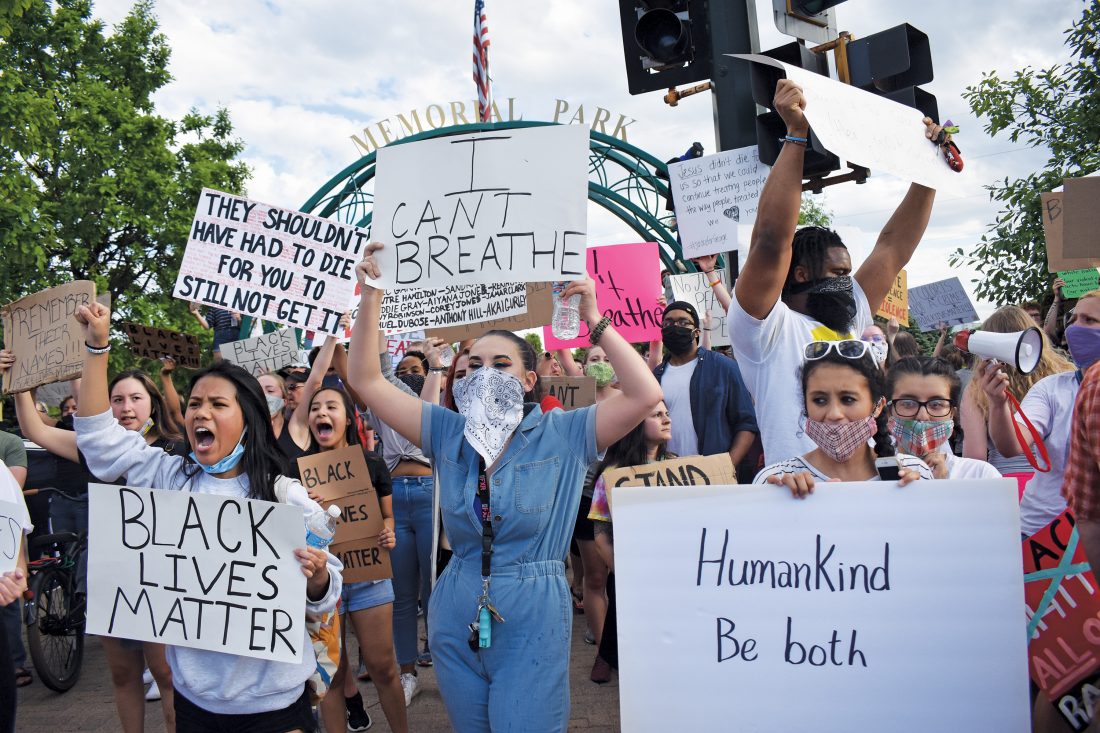 Photo by Sam Thiel People hold up signs during a peaceful protest event about George Floyd at Memorial Park on Wednesday.

MARSHALL — They wanted their message to be heard — and between the chanting and the honking horns of passing cars on Main Street and East College Drive, that message was hard to miss.

A crowd of roughly 200 people lined up to march down College Drive on Wednesday evening, carrying signs and speaking out against racism, police violence against people of color, and the death of George Floyd.

“Say his name,” protesters called out as they walked.

“George Floyd!” came the answer from the group.

There had been concerns in Marshall that Wednesday’s protest would lead to violence or property damage. The event was peaceful, however, with participants either standing at the corner of Main Street and College Drive near Memorial Park, or marching down East College Drive as far as the Speedway gas station. Marshall Police and city staff directed traffic, while Speedway and another group of community members provided water for the marchers.

“We’re here for peace, not chaos,” said Jess Dressen, one of the event’s organizers, as she gave instructions to the crowd. If anything got out of hand, the protest would be broken up immediately, she said.

Dressen, a Canby resident, said she helped organize Wednesday’s protest together with friends from a Marshall area Facebook group they were part of.

“We need to show support where we are, to show we’re all in this together,” she said.

As the march got underway, the block-long line of people went from Main Street to Bruce Street and back two times. In between, people knelt down at the corner near Memorial Park, shared messages of encouragement and called for justice for Floyd and many others.

“Human suffering anywhere concerns men and women everywhere,” Jordan Dressen said, as part of an opening prayer for the march.

While marchers said it was great to see so many people take part in the protest, they said it couldn’t end there.

Lozililo Moyo, a Marshall resident and SMSU student, told the crowd that seeing video footage of Floyd’s death while a Minneapolis Police officer pressed his knee on Floyd’s neck “broke my heart.” But the response from Wednesday’s protest was something that made her feel less alone.

“Seeing you guys come out like this, it makes me able to breathe,” she said.

Moyo ended up marching together with Krishna Ghimire and Conner Bottger, both Marshall residents. That unity was what protesters were there for, and not violence or looting, Ghimire said. ”

We can come together and form a true peaceful protest,” she said.

Bottger said Wednesday was the first time she had gone to a protest, and it was how she met Moyo and Ghimire.

“It feels really good to actually do something physically,” instead of on social media, Bottger said of taking part in the march.