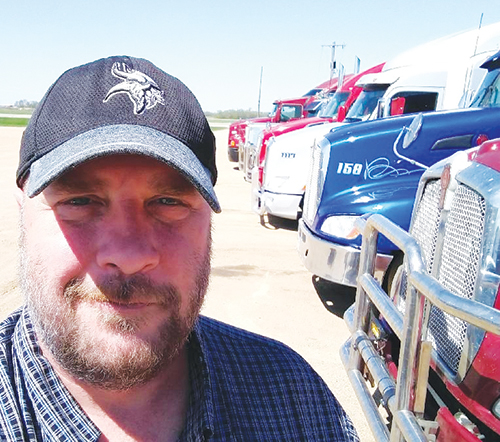 Photo submitted by Jeremy Johnson Marshall truck driver Jeremy Johnson stands next to trucks during his run to Bloomington. He hopes to join a rally by other drivers in Washington, D.C.

WASHINGTON, D.C. — A convoy of around 70 trucks from around the country flooded into the nation’s capital Friday as the drivers protested low freight rates during the COVID-19 pandemic.

The group plans to remain parked along Constitutional Avenue until Monday in hopes of attracting the attention of President Donald Trump.

Marshall truck driver Jeremy Johnson is hoping to meet up with the other drivers after he completes his current truck run that took him to Bloomington Friday. He was driving his truck back to Marshall when he spoke to the Independent by phone on his bluetooth.

“Truckers are hurting. Truckers all over are committing suicide,” said the lease operator, who owns his own truck.

In these times of the COVID-19 coronavirus pandemic, “people made a mad dash for toilet paper and didn’t find any and then said, ‘what am I going to do?’ “ Johnson said.

He said the hauls with lower rates are harming truckers, who have the same overhead as always.

He also said trucks cost $1.10 to $1.50 per mile to run. He admitted gas prices are down, but “when your truck gets 6 miles to the gallon, there are still high fuel costs.”

“The brokers are getting paid the same amount of money that they were six months ago, but now because of all the restaurants and bars that are closed, there’s not enough freight to be hauled,” he said.

Johnson said he is grateful for local distributors that they haven’t changed their rates.

“Schwan’s and Turkey Valley — none of them have lowered their rates,” he said. “We live in a great community.”

Concerns over safety issues such as truckers driving while sleepy — “there are a few bad apples in every industry,” Johnson said — resulted in tight regulations.

Truckers must complete their day in 14 hours, is one example offered by Johnson.

“When I start that clock, no matter what happens, I have to end it in 14 hours. If they are held up by traffic or at the shipper or receiver, it doesn’t matter.”

He said long-haul truckers must take a half hour break after 8 hours. A driver may not drive without first taking 10 consecutive hours off duty.

The 14-hour day rule was instituted and many times truckers had to “fudge” the logbook to fit everything in within that time frame, he said.

“I might take a three-hour nap to feel rested,” Johnson said. “The rules don’t make sense. They are not common sense.”

Electronic tracking devices were installed in newer trucks that could handle the software, 2000 and newer.

“So now we have a computer telling us when you’re rested,” he said.

Before Electronic Logging Devices, “we could do our own thing,” Johnson said. “It takes away the freedom of it.”

The 14-hour rule is eased if the trucker is carrying what is deemed an essential load.

“The (President Donald) Trump administration lifted the regulations — which mean I don’t have to follow the 14-hour rule,” he said.

Johnson said he recently drove a load of watermelons 905 miles under the relaxed rules. “We’re deemed essential during an emergency, but we are essential 365 days of the week.”

Johnson said Trump has had a couple of photo opportunities with trucks and has lauded truckers as “heroes,” but hasn’t taken phone calls from the American Trucking Association, a lobbyist group for large trucking companies.

Johnson said the new regulations were pushed by lobbyists for large companies to “level the playing field.”

Johnson is a driver who works through Eickhoff Enterprises. He said 90 percent of goods is hauled by trucking companies that own 30 or fewer trucks.

Johnson said the truckers’ issues he relayed Friday are just “the tip of the iceberg.”