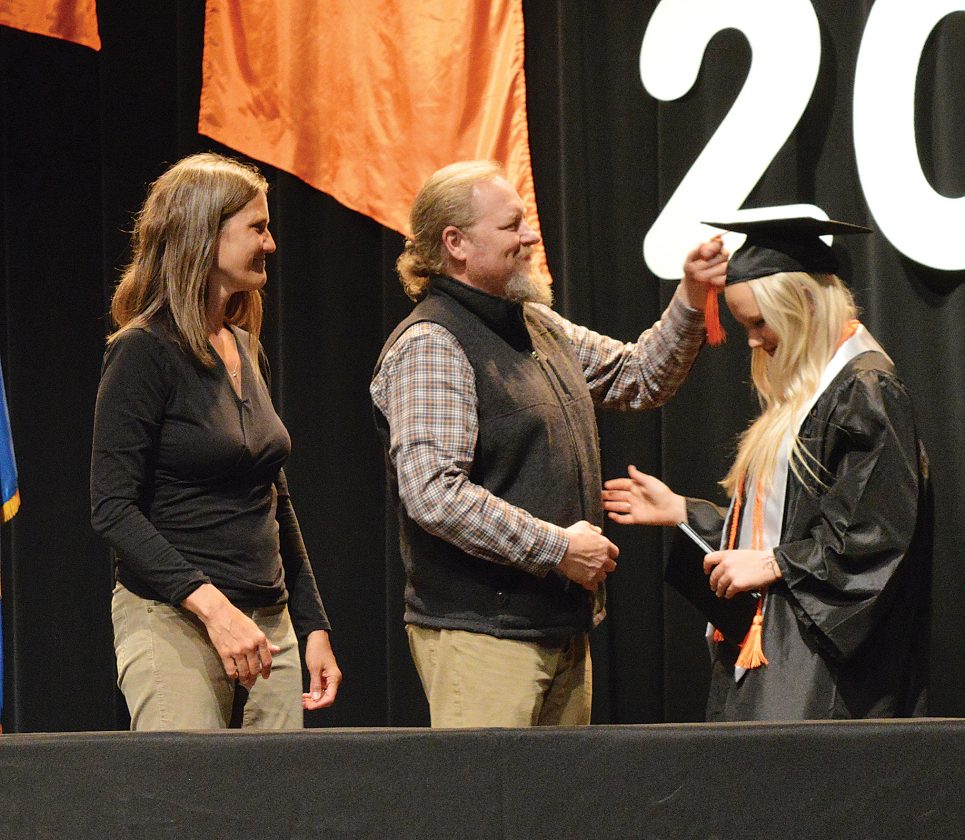 Photo by Deb Gau Graduating Marshall High School senior Signe Christensen was presented with her diploma, and had the tassel moved across her cap, by her parents Julie and David Christensen. Last week, seniors and their families filmed segments of a “virtual commencement,” in order to follow social distancing guidelines for graduation. The full program will be broadcast on Friday.

MARSHALL — It definitely hadn’t been a typical year for Marshall High School seniors, and it was going to finish with a unique twist on commencement. Last week, soon-to-be graduates of the MHS Class of 2020 each walked across the stage separately, with only a small audience of parents and school officials.

The experience was strange, but it was still good to be recognized, seniors said.

“It was a good way to end off the year. It’s nice to have something,” said senior Dawson Reese.

While precautions against COVID-19 meant MHS can’t hold a traditional commencement ceremony this year, school staff worked to make sure graduates would still get a chance to shine. Last week, graduating seniors signed up for individual time slots to be filmed getting their diplomas. The video would be edited together later to make a virtual commencement program that will be aired on radio and local television.

The virtual commencement ceremony for the MHS class of 2020 will air at 7 p.m. Friday, MHS principal Brian Jones said. The program will be broadcast on Marshall Radio and Tiger TV, and will also be livestreamed.

While it was hard for seniors not to graduate together with their classmates, organizers of the virtual commencement still tried to make the experience special. The stage stage was set with orange banners as seniors arrived one by one dressed in their graduation caps and gowns. As he welcomed each soon-to-be graduate, Jones walked them through the ceremony.

“You’re going to walk over to your mom and dad — and remember to smile!” Jones said, as he explained the setup to MHS seniors like Brianna Goslar. Goslar walked across the stage to her parents, who presented her with her diploma as a camera crew from Studio 1 TV filmed.

Graduates also had opportunities to have their pictures taken, and each graduate was also filmed tossing his or her cap in the air.

“It was weird to have to do another take,” said senior Jadzia Nigg. One of the unique things about doing a virtual ceremony was the ability to re-shoot parts if needed, so everything ran smoothly.

“It’s definitely crazy, but I can’t thank everyone enough,” for putting the virtual commencement together, said senior Emma Kepler. With all of the changes for students this spring, she said, “I think it’s been as good as possible.”

“The hard part is having to be in a class by yourself,” Reese said – although he said he’s been lucky in that he didn’t have many tough classes for the last part of the school year.

“It’s been hard, but our teachers have been so helpful and understanding,” Kepler said.