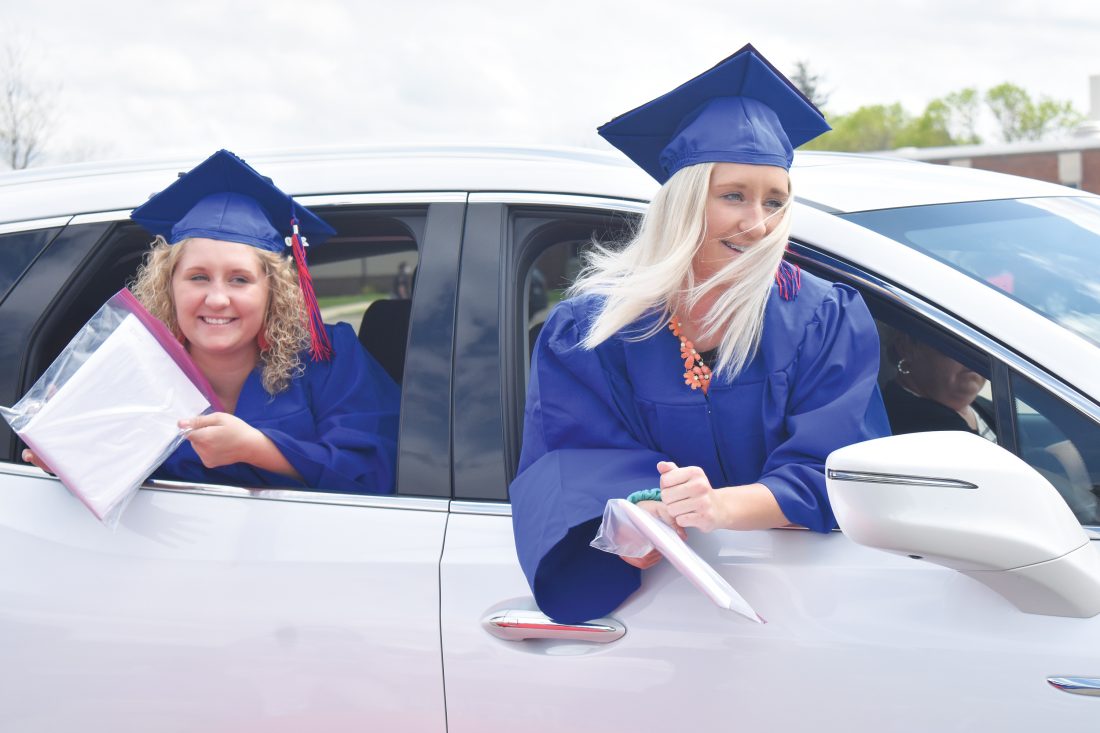 Photo by Sam Thiel Malinda, left, and Makala, right, Lemburg pose for a photo after receiving their diplomas at Tracy Area High School during their graduation ceremony on Sunday.

TRACY/TYLER — This weekend, hundreds of high school seniors across the state celebrated the special moment of graduating and moving on to the next chapter of their lives. This year’s class, however, shared something special that no other former class has: a graduation in the middle of a global pandemic.

Along with their caps and gowns, suits and dresses, many seniors wore masks in efforts to protect themselves and those around them from the spread of COVID-19.

While it’s certainly a tough way to end this particular chapter of their lives, this year’s senior class showed lots of strength, determination and a tight-knit bond that helped them persevere their last few months of high school and come out on top.

Graduation at Tracy Area High School saw 67 seniors receive their diplomas on Sunday. Senior Amy Vang welcomed the class, talking about how they shouldn’t take things for granted, especially when one thing such as COVID-19 can take so much away.

“Our senior year was supposed to be what we thought would be the greatest high school year ever, however that took a turn when our spring break ran away with more days. While being stuck in quarantine has taught me many things, the most important one is learning to appreciate what I have and not take it for granted,” Vang said. “This is definitely a year that we will never forget, especially the graduating class of 2020.”

Superintendent Dr. Chad Anderson recognized the class salutatorian and valedictorian, who were Cheemeng Yang and Lucas Gervais, respectively. Anderson and the rest of the crowd then recognized Emilie Hissam, who would have been a senior this year, but passed away from lung complications in March of 2019. A rose was presented to Emilie’s parents in honor of their daughter.

Principal Kathy Vondracek then addressed the crowd, urging graduates to use their intelligence and interests toward pushing the world in the right direction.

“You are an outstanding class. You are blessed with multiple intelligences, with multiple interests and we are very aware that the world has some pretty big problems to solve, requiring minds that can analyze and synthesize, that can apply knowledge and be creative,” Vondracek said. “We need personalities that are brave enough to make suggestions and courageous to push forward your ideas. We cannot be content and happy with the status quo, when we know as people and citizens of America that we can do better. Use your multiple intelligences to speak your mind, let the world know what direction we need to be going in, in order to improve life for all of us.”

Fellow senior speakers Tyler Timm (past), Yang (present) and Brooke Christian (future) spoke about thriving through the current situation together and living in the moment. Gervais then delivered the farewell speech, thanking the teachers and parents for all of the hard work they’ve put in and support they’ve shown over the years. He also encouraged his classmates to continue to improve the world each day.

“I challenge each of you to leave each day better than it started,” Gervais said. “It is our time to change the world, to take responsibility for our actions, good or bad and build a path for our future.”

Cars were then lined up for the drive-up ceremony and Vondracek read the seniors’ names as they picked up their diplomas. Once the ceremony was over, the “Minnesota Rouser” was played over the loud speakers and instead of the traditional tossing of the cap, balloons were released into the air to signify the closing of the ceremony. Finally, the class song, which was the hit, “I Want it That Way” by the Backstreet Boys, blared over the loudspeaker as the seniors drove off into the next part of their lives.

Shortly after the ceremony, a parade was held to honor the seniors along the streets of Tracy.

At Russell-Tyler-Ruthton, it was a similar style to their ceremony. Cars lined up and watched the ceremony on a Jumbotron before seniors drove by to receive their diplomas.

RTR Principal/Athletic Director Dan Bettin said the first option was to have a drive-up ceremony, but then switched the plan to holding it on the football field. But once Minnesota Gov. Tim Walz announced specific guidelines for graduation ceremonies, the school went back to its original idea.

“Initially our discussion was to have a drive-in style graduation, so that was always plan A to begin with,” Bettin said. “When other schools said they were going to have kids on the football field, everything was set into action for that until Governor Walz threw us a curveball and said that was prohibited, so we went back to the drive-in ceremony.”

Each graduate was in their own car with their family members and designated to a specific spot in the drive-up lineup. Students and family members inside the cars were also encouraged to wear masks and were not allowed to leave the car at any point during the ceremony.

Bettin said that in addition to their diplomas, seniors also received any awards they were supposed to get during the senior night awards ceremony that was canceled.

Senior Rylie Hess welcomed the class, followed by Bettin. Class valedictorian Ashley Owen and salutatorian Shawna Thomsen then delivered their speeches via video on the Jumbotron. After a slideshow highlighting the seniors was played, the diplomas were given out. Once it was time for the presentation of the class, the tradition of tossing the caps was altered, as graduates instead released the balloons they were given.

Bettin said this year’s class is the first he’s had for all four years and he’s proud of the growth they’ve shown throughout that time.

“I’ve been here for six years and this year’s class is the first I’ve known the entire four years, so I’ve really gotten to know them. They’ve grown up quick; senior year they want it to be the best nine months of their life and to have it yanked away like this is emotionally draining,” Bettin said. “They’ve stayed strong though and they were excited to have some input on graduation. They can say they’re the only class at RTR to have a graduation on a Jumbotron and be outside. They pushed to be strong individuals and independent learners and I’m proud of where they’ve come from.”

Once the ceremony was completed, a post-graduation “recessional” was held for graduates. The “recessional” was not planned or arranged by the school and happened off-campus. Students could be escorted by police or fire departments through each town that makes up RTR (Russell, Tyler and Ruthton).

As they prepare for the summer, Bettin said both teachers and students deserve a well-deserved break and hopes they can figure out a solution in order to return to school together in the fall.

“Our staff did what they were supposed to do but they were also getting tired, so I think it will be a well-deserved summer for both students and teachers. Everyone is just so tired from this semester; they need June and the early part of July to just forget about things for now and recharge and rest with their family,” Bettin said. “Once we get more concrete guidance, we can put a plan together; we all want to be back in school together.”