Delivering help and …prayers during a crisis 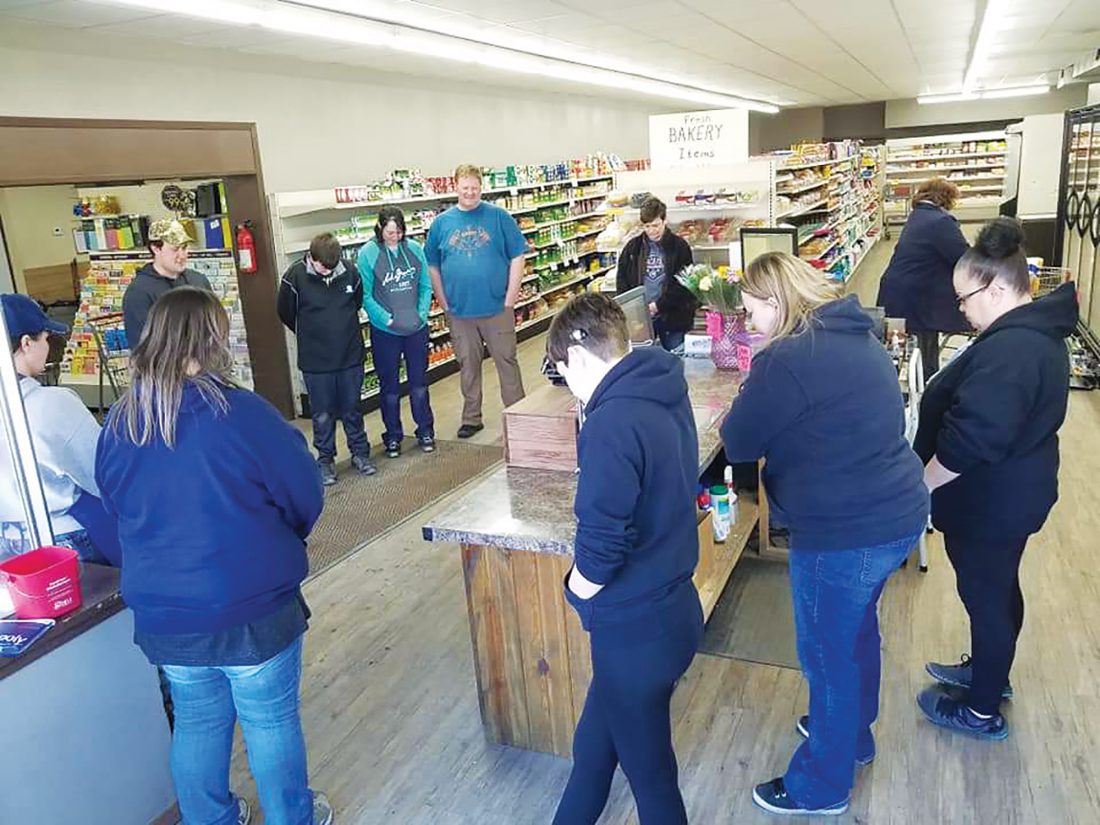 LAKE BENTON — All it took was a simple trip to the grocery store to see a community come together in a time of need.

The Rev. Jonathan Olson, a pastor at the Lighthouse Assembly of God, was doing his morning shopping at the Lake Benton grocery store on Friday picking up some eggs and a few other things when he noticed things were a little more chaotic than usual.

After receiving a small delivery load due to high demands, Friday’s shipment to the store was their biggest one yet, as they received eight pallets worth of groceries. Meanwhile, the store’s manager, Kelly Bolt, was at the local hardware store picking up some supplies. Exhausted from long days filled with new adjustments and overwhelmed with the recent delivery, it was nearly too much for her.

“I was at the hardware store venting to the owners a little bit and just having a bad day,” Kelly said. “My meat grinder wasn’t working and with the delivery it was nearly too much. Then the pastor called me and said they were there to help and I couldn’t believe it.”

Olson and a small group of volunteers came to Kelly’s aid when she needed it most. Thanks to the extra efforts of the volunteers, all eight pallets were able to be unloaded and stocked on the shelves. When Kelly looked around and saw the number of volunteers unloading the truck and willing to lend a helping hand, she was overwhelmed with joy.

“It just means a lot,” Kelly said. “There’s just a lot of gratitude and thanks and it was very reassuring just knowing that I am supposed to be here and that I am making the right decision.”

Kelly and her husband, Bill, bought the store on March 3. Kelly had some experience working in a grocery store as she had previously been at Brad’s Market in Minneota for the past few years, learning how to cut meat and do other things. When it came to operating their own store, Bill said it was a huge learning curve for both of them.

“We’ve never owned a grocery store before, so it was a steep learning curve and there are a lot of behind-the-scenes work such as permits and licenses and working with vendors and suppliers as well as our staff,” Bill said. “Then the coronavirus rolled in and the panic buying started to trickle into Lake Benton. Last week, we were struggling to obtain product from our wholesaler SuperValu, who also does this for Jim’s Market in Canby and Brad’s Market in Minneota. When we contacted SuperValu, our warehouse was seeing about 240,000 cases per day, but that number had been pushed to about 700,000 cases a day.”

Bill, who also is the Chief of Police for Minneota, added that Kelly has had to put in a tremendous amount of extra work into maintaining the store, all while working for free.

“It’s hard to be a cop’s wife and there are so many sacrifices she’s had to make. My wife has been working at the store for free because we’re just not able to pay her at this time,” Bill said. “She manages the store and is the primary owner and works about 60-70 hours a week helping cover everything and cutting meat.”

Kelly knew the store was going to come with a lot of new territory but said that she and her employees were all in a similar boat and that they would get through it together.

“We all had new jobs and I have the best employees and we all just came together. Just buying the store came with its challenges, but I knew we had to keep moving forward,” Kelly said. “We were learning about different things like price changes and how to move products and just training my employees about getting everything on the shelf. Then all of a sudden, the world became a crazy zoo.”

As the world quickly shifted into a chaotic situation, Bill said they relied heavily on their prayer as they began the transition into buying and owning the store.

“We’re very much believers in Christ and prayed a lot when it came to purchasing the store. We prayed about things like funding and we were able to obtain the store and we couldn’t have done it without the Lord,” Bill said. “Every day is a matter of prayer.”

Kelly added her employees are extraordinary and have done so much for her and she’s extremely grateful for the sacrifices they’ve made, especially during the last couple of weeks.

“I couldn’t ask for a better team, the girls are just wonderful,” Kelly said. “The older employees have been helping with things like operating the forklift and the previous owners Al and Tammi (Trigg) are always there to help answer any questions I have. My employees have put in so many extra hours and I just don’t have any words for how grateful I am for them. They are always checking in on me and seeing if I need help.”

Bill added there’s so much that goes into running a grocery store and it was reassuring to see the level of support they’ve seen from the community.

“So much has happened that I can’t express what it takes to run a grocery store. To make it all possible, there’s a lot of prep/setup and coordination with each other and the staff and it was a real eye-opener when we became owners,” Bill said. “The Lake Benton community wants to keep their store here and it couldn’t be done without their support as well as the support of our Lord and Savior. It was very reassuring and comforting to see the support that we have from the people in our community.”