A hearing on planned street construction will continue 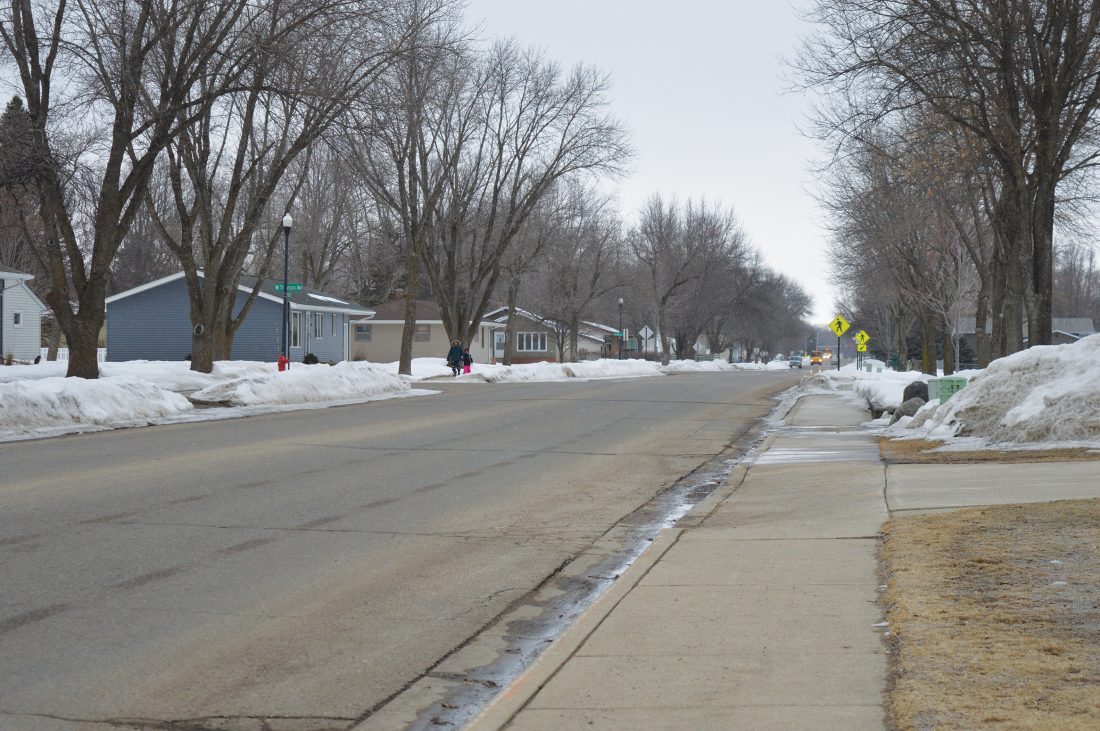 Photo by Deb Gau Parts of South Fourth Street, which the city of Marshall is planning to reconstruct, only have sidewalks on the west side of the street

MARSHALL — There was plenty of public feedback and discussion on planned construction on South Fourth Street, but there wasn’t time to hear it all on Tuesday night, Marshall city officials said. A public hearing on the construction will pick up again at the Marshall City Council’s next meeting.

“We do need to adjourn by 6 p.m., because it’s precinct caucus night. State law says we need to be adjourned on or before 6,” said Marshall Mayor Bob Byrnes.

In the interests of giving the street project a full hearing, council members continued it to March 10.

The city of Marshall is planning to reconstruct South Fourth Street between Elaine Avenue and Country Club Drive. Besides rebuilding the street, the project would replace water and sewer mains, replace on-street bike lanes with an 8-foot shared use path on the west side of the road, and add new sidewalks on the east side of the road.

The estimated cost of the street construction is $2.8 million, city staff said. Adding in contingency and engineering costs, the project comes to an estimated total of $3.4 million, said Public Works Superintendent Jason Anderson.

The sidewalks were one portion of the project local residents weren’t in support of. Back on Feb. 11, when the city called for the hearing, both Anderson and council member Russ Labat said they had heard from residents who didn’t want the new sidewalks on the eastern side of South Fourth Street.

On Tuesday, council member Craig Schafer said he had also received one call in opposition to the new sidewalks.

Residents who spoke at the hearing said they were concerned about how the construction would reduce South Fourth Street to a width of about 41 feet. With vehicle and foot traffic along the road and on-street parking, narrowing the street is a safety concern, they said.

Residents on the east side of South Fourth Street were also against adding new sidewalks, where there currently are none.

“I’m opposed to it,” said Jordan Carstensen. He said the plans to add sidewalks and boulevards to the east side of South Fourth Street would leave residents with less space on their driveways that could be functionally used for parking — it’s illegal to block a sidewalk with a vehicle, he said. “With the specs of the project, with them narrowing the road, it’s also going to be shifted over, and then with the amount of space used for a boulevard and a sidewalk, would cut off roughly 11-and-a-half feet from every driveway down that east side,” and driving more people to park on the street, he said.

With West Side Elementary planned to be decommissioned in a couple of years, there will also be less need for sidewalks for student foot traffic on South Fourth Street, Carstensen said.

“Even though there’s ordinances, I don’t think every neighborhood is accommodating for everything,” he said.

“Is it meant that that chapter (of the ordinances) is basically for new subdivisions, so if we have a new subdivision the rules would apply, but with existing subdivisions, aren’t they grandfathered in where they would not have to meet those requirements?” Bayerkohler said.

Anderson agreed that the ordinance was meant for new subdivisions, but because of the ordinance, the city has been working under the assumption that sidewalks are needed on both sides of the road.

Council members voted to continue the hearing at their next regular meeting. Based on the sidewalk discussion at Tuesday’s part of the hearing, Byrnes also asked city staff to prepare an alternate resolution for the council to consider at the continued hearing.