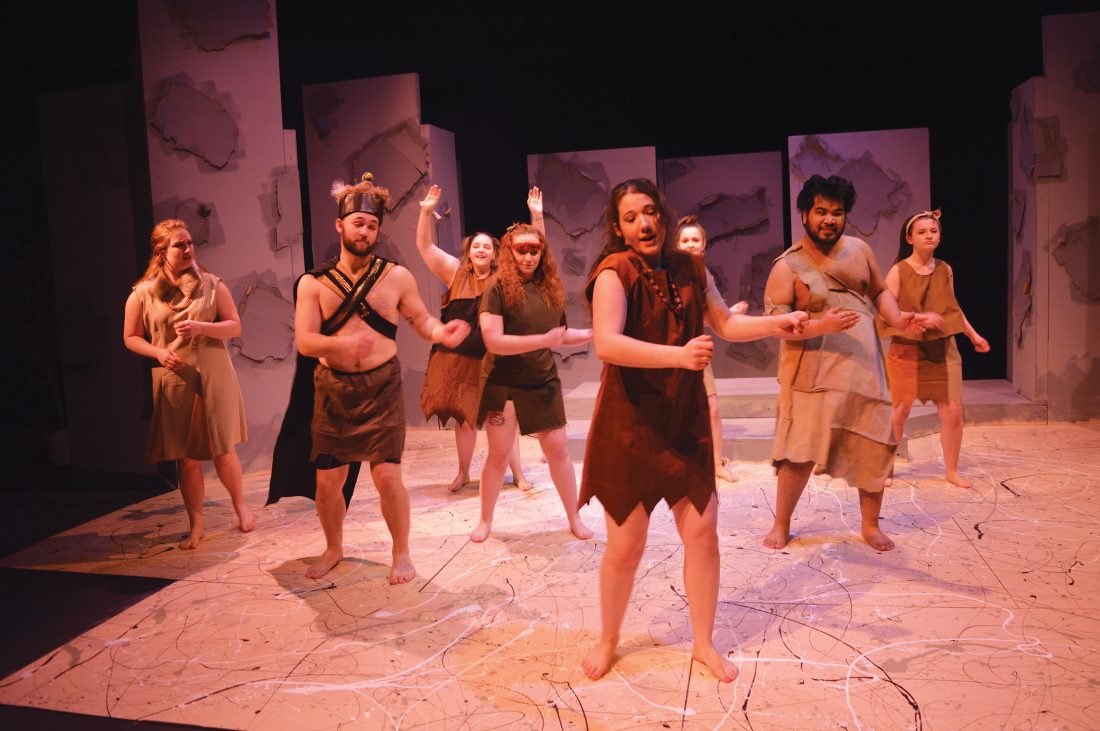 MARSHALL — When searching for a show to do for the Southwest Minnesota State University Drama Club, Mary Jean Porter turned to the Internet.

“I found this one by accident on YouTube,” Porter said of the show she’s directing.

Porter said she learned the rights for the show were recently released.

“I was drawn to the show because it had a large female cast,” Porter said. “This show showcases the female talent very well.”

The show is also something that will draw in people who aren’t necessarily into theater, Porter said, and it’s fairly new. “Firebringer” came out in 2016 and was originally brought to the stage by StarKid Productions.

“The overall theme is family,” Porter said. It’s also about the discovery of fire, she added.

According to the StarKid Productions website, the synopsis of “Firebringer” is “At the dawn of humanity, one tribe of cave-people survives the many trials of prehistoric life under the wise leadership of Jemilla, The Peacemaker. Jemilla taught her people to express themselves … But one member of the tribe doesn’t seem to fit in: Zazzalil. She’s always trying to invent things to make life easier … for herself. While out hatching her latest scheme, Zazzalil stumbles upon the most important discovery in history. One that will pit her tribe against wooly mammoths, saber-toothed tigers, and change the world forever. She’ll travel from omega to alpha, and become … the Firebringer!”

“Firebringer” is the first show Porter has directed. It’s a musical as well, and Porter said it does contain mature language.

“I’ve had so much fun,” Porter said about directing the show. “There definitely have been some challenges. I’m fortunate to have peers who are able to work with me.”

The cast of 10 includes six women and four men. Porter said they’ve also created puppets, which are part of the show. There’s Snarl, the saber-toothed cat, the “main villain,” and Trunkell, a wooly mammoth.

“I watched the show on YouTube,” Spieker said. She said she found it funny. “I kind of fell in love with the songs in it.”

Spieker describes her character as a sassy rebel.

“She wants to do good things, but she doesn’t think through a lot of things.”

“She’s the one who discovers fire and kicks her old leader out of the tribe,” Porter said of Zazzalil.

Brady Berg is one of the actors in the show.

“The first word that comes to mind is crass,” Berg said about describing the show. It’s also lighthearted and fun, Berg said.

Tailer Benson said her character Chorn is like a “human ape,” the thing you think of when you think of cavemen.

Spieker said it’s so cool that students are in charge of the drama club productions, and it’s experience for theater majors to “get their hands dirty.”

“It’s very technical, but we do have everything necessary,” Berg said. It’s a lot of work, and it’s definitely a learning process for everyone in the production, he said.

“You get to work alongside your peers,” Benson said.

“I think everyone is ready, this week is going to help us get the jitters out,” Berg said.