There’s a lot at stake for area communities in the 2020 census. Local officials and organizers are working to encourage people to be counted. 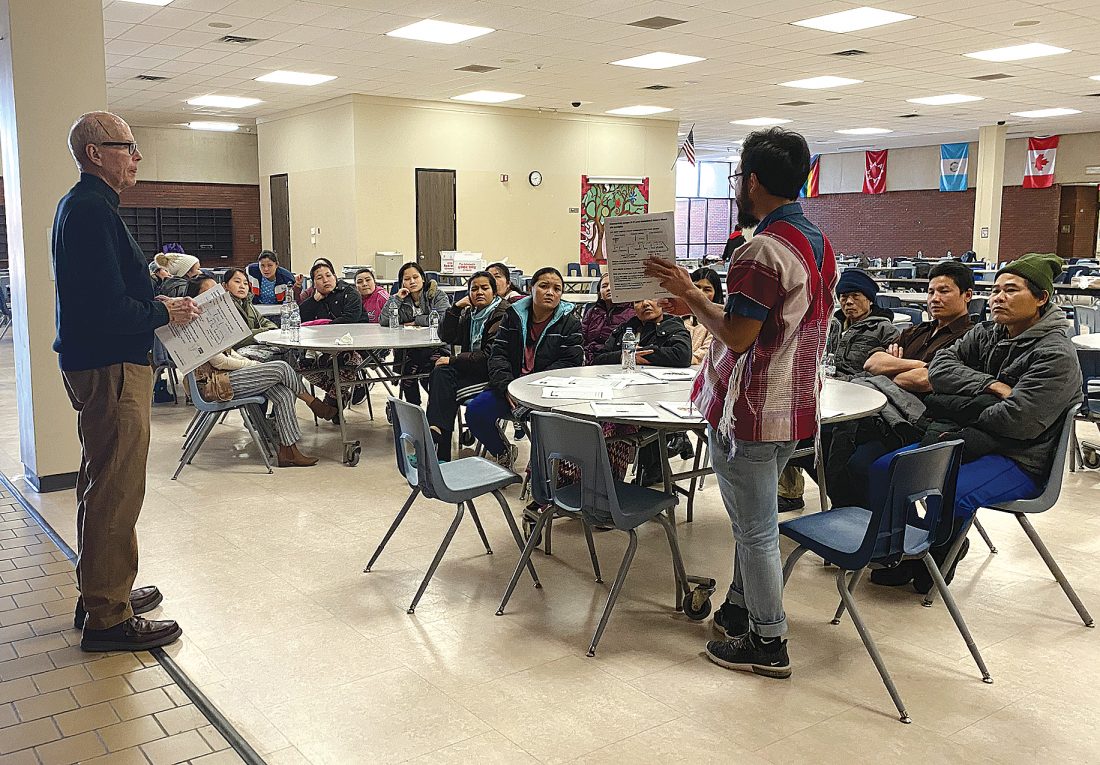 Submitted photo Ron Skjong, at left, spoke to a group of Karen families about the upcoming 2020 census, during a family engagement event at Marshall Middle School earlier this month. Skjong and Parent Student Connectors like Hsa Mu helped explain about the census form, and why every household should participate.

MARSHALL — The days are counting down closer to April 1, the day of the 2020 U.S. Census — and local and county government, community organizations and even schools are trying to get the word out. It’s because there’s a lot more at stake than just a headcount of people living in southwest Minnesota, area residents said.

“We’re trying to tell people why it’s important,” said Ron Skjong, who is working for the Marshall Area YMCA to do census education. If a lot of people go uncounted, he said, “Our representation diminishes.”

Population data from the census, taken every 10 years, is used to help determine how many seats in the U.S. House of Representatives each state has. It also helps determine everything from congressional redistricting to creating local voting precincts, local officials said.

“There’s so much that the census numbers will influence,” said Marshall Mayor Bob Byrnes.

Census data is also important for economic reasons. Businesses use population statistics like census data for planning, and deciding where to move or expand, Byrnes said. “If we want to have additional shopping opportunities and employment opportunities, we need to be accurate about what (population) we have.”

Earlier this week, a committee of city and Lyon County government workers, local media and area residents met in Marshall to share ideas about census education. Byrnes said the common messages they needed to get across about the census were, “It’s important, it’s safe and confidential, and it’s our duty.”

One key part of spreading the word about the 2020 census will be explaining some changes to the process. This year U.S. residents will have the option to respond to the census online, the U.S. Census Bureau says. Starting in March, households across the country will receive instructions from the Census Bureau on how to fill out the 2020 census online, by phone, or by mail. By April 1 — Census Day — every home should have received an invitation to participate in the census. In April census takers will also start visiting places where people live in large groups, like college campuses and senior centers, the Census Bureau said.

Later in the spring and summer, census takers will visit homes that haven’t responded to the census yet, to help make sure the count is accurate.

Skjong said another big part of local organizers’ work is addressing people’s fears and concerns about the census.

“I hear a lot of myths out there, and disinformation,” he said. For example, he said, you don’t have to be a U.S. citizen to participate in the census. “We count everybody.”

Under federal law, the U.S. Census Bureau also can’t release any information that identifies individual people. Census records for individuals are sealed for 72 years after each census. The 2020 census won’t ask about respondents’ citizenship status either, the Census Bureau says.

Area committee members have each put their own efforts forward to encourage people to participate in the census, but working together is also important, Skjong said.

“We’re all trying to send out the same message,” Skjong said of the community groups spreading the word about the census.

Skjong is working for the Marshall Area YMCA, which earlier this year received a grant from the Minnesota Council of Nonprofits for census education. He said an important focus of the grant project is reaching out to minority populations in the Marshall area community. As part of that effort, Skjong has been working with community groups and Marshall Public Schools.

“I went to Marshall Middle School and was there at their family engagement event,” earlier this month, Skjong said. He worked with some of the school’s Parent Student Connectors to talk about the census with Somali, Karen and Hispanic families in Marshall.

“For the city, we have done several events,” where city representatives talk with the public about the census, said Marshall City Clerk Kyle Box. Both Box and Byrnes have spoken at meetings of area professionals, at the Adult Community Center, to student groups at Southwest Minnesota State University, and at events like the recent Cultures On the Prairie day at SMSU. Box said he also appeared on the Community Connect program on Studio 1 TV to talk about the census.

Box said Marshall even promotes the census through the city website, where a pop-up notification allows visitors to sign up for a reminder to fill out their census form.

One Marshall population group that tends to be under-counted on the census is students at the university, Byrnes said. Students spend much of the year living on campus, and count toward Marshall’s population, he said. But of Marshall’s three census tracts, the one with the lowest response rate in previous counts includes north end of town, where the SMSU campus and a lot of rental properties are located, Box said.

Other ways that local residents are getting the word out about the census will include spots on radio and local television like Studio 1. Media communications specialist Alex Peterson said the community access channel also started including census information spots on its social media over the summer.

Skjong said he will be speaking today at a census clinic at the Adult Community Center in Marshall, hosted by the Residents United community group. The event starts at 3 p.m.