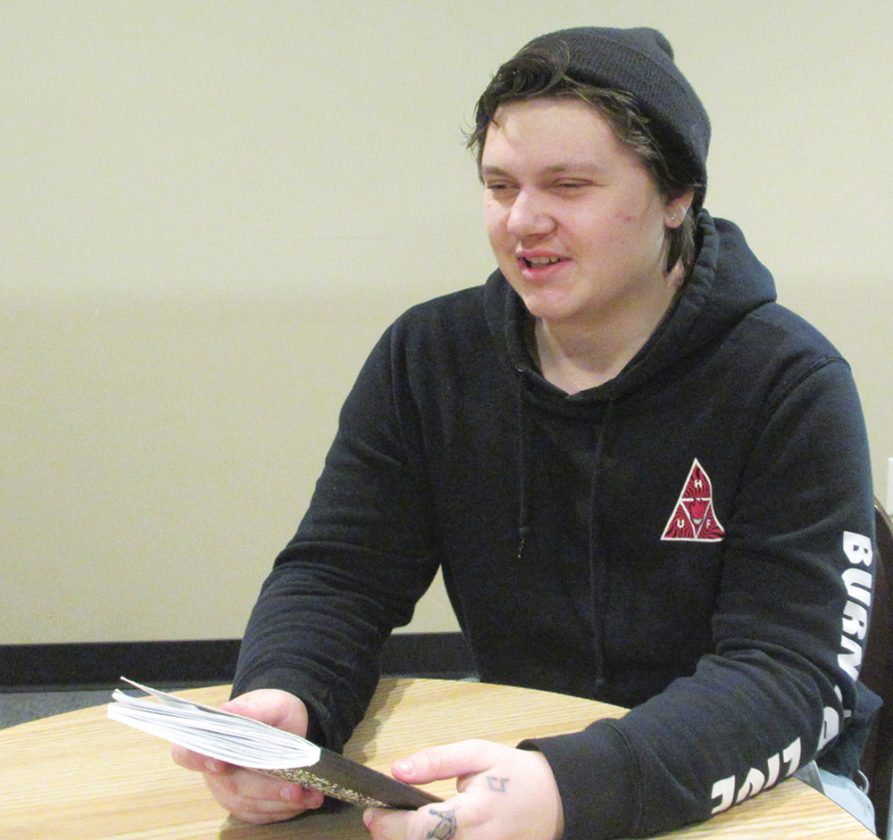 Photo by Karin Elton Marshall resident Alex Rademacher is putting his struggles with mental illness into music. He plans to make a mixtape of nine songs and send it off to a company to be produced.

MARSHALL — He’s been through a lot in his short life, he says, but now wants to turn his life around and create music to help him through the tough times and inspire others as well.

Originally from St. Cloud and Sauk Rapids, Alex Rademacher, aka AlexthaGreat, 20, has lived in Marshall three years now. He said he had a tough time in high school and didn’t graduate, but hopes to start the GED process soon.

His mother, Kelly Rademacher, is from Dawson and lives in Marshall. Rademacher lives in a group home and will be there for six more months. He said the group home is like an extended family.

“We all socialize and talk to each other,” he said.

He said he wants to bring about awareness of mental health.

“Mental issues are a struggle for a lot of people,” he said. I think people should open their eyes to mental illness.”

Rademacher is putting his struggle into his music.

“I take everything I’ve been through and use my mental illness to my advantage and make something of it,” he said. “I make music.”

He has several composition notebooks full of his writings — which he calls “inspirational rap.”

“I want to say to people, ‘it’s OK to be yourselves.’ They don’t have to be what society wants them to be.”

He said music has “always been in my life.” He and his cousin used to strum a guitar and perform for the family.

“Music has made an impact on my life,” he said. “It’s helped me through the darkest points. It’s moved me and motivated me.”

He wants to make music with a positive message. “I want to put something out that people want to hear. I don’t want to talk about negative things that don’t inspire,” he said. “It’s a waste of talent almost. All they care about is money.”

Rademacher quoted the Michael Jackson song, “Man in the Mirror” — “Take a look at yourself and then make a change.”

Rademacher said he has researched the music-sharing business online and found a company in Raleigh, N.C., Dawns Diamond Entertainment LLC, that produces music.

He plans to make a mixtape of nine songs on his computer using free software and then send it to Dawns Diamond Entertainment to polish the songs professionally.

His moniker, AlexthaGreat, comes from his aunt, who would call him Alexander the Great, after the ancient Greek king.

“It made me feel special — like I was meant to do something great,” he said.