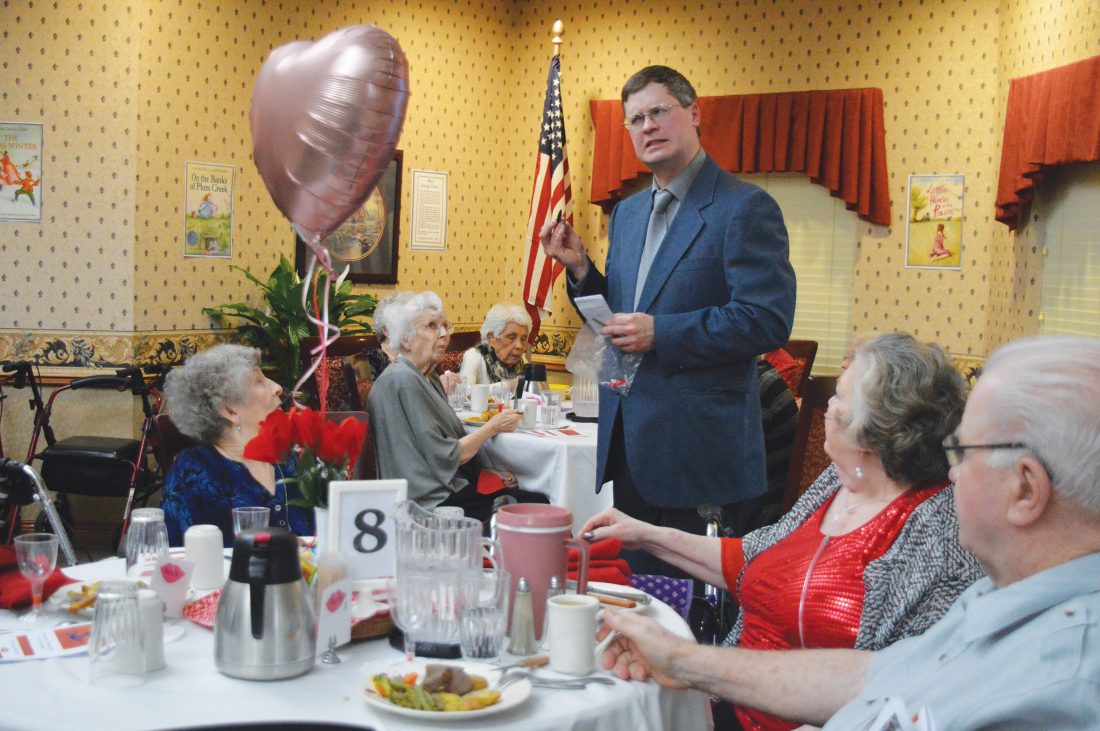 Photo by Deb Gau Investigator Sherman “Sherm” Locke, played by Ross Holmberg, considers the evidence in a murder aboard the S.S. Summit cruise ship — in this case, poisoned chocolates. The original play “Deadly Kisses” was part of a dinner theater event at Boulder Estates on Thursday.

MARSHALL — It had all the makings of a special night out. Residents at Boulder Estates sat down to enjoy a steak dinner and live entertainment from the Marshall Area Stage Company. And the desserts, as Boulder Estates tenant services director Jan Mason said, really were “to die for.”

In the middle of a conversation with fellow diners, Cookie Dough, played by Emily Saad El-Dein, suddenly slumped face-down on the table. The murder weapon? A poisoned chocolate kiss.

“I saw her eat a chocolate kiss right before she died,” said Barbie Dahl, played by Sue Jants. Cookie and Barbie were both characters in “Deadly Kisses,” an original murder mystery play performed as dinner theater Thursday evening at Boulder Estates.

For one night, Boulder Estates was transformed into the S.S. Summit, where a romantic cruise suddenly goes awry with multiple murders. After being introduced to a cast of colorful characters, audience members had to help investigator Sherm Locke, played by Ross Holmberg, figure out “whodunnit.”

The idea for a dinner theater murder mystery was inspired by some of MASC’s past shows, Mason said. It seemed like something that would not only be fun to do, but would engage residents as they work to solve the mystery.

“This time, we’re doing it for Valentine’s Day,” and offering residents a new way to celebrate, she said.

“Deadly Kisses” was written for the event by Maureen Keimig.

Besides writing the play, Keimig was also part of the cast, playing a cruise ship worker and psychic under suspicion for Cookie Dough’s murder. Mason said the cast was made up of both actors from MASC and Boulder Estates staff and residents. Judie Graffunder played piano in character as pianist Delilah Samson, and even Boulder Estates’ kitchen crew were part of the show. Nadia Palmer’s chef character got a big laugh, as she ducked out of the kitchen wearing an apron spattered in red paint.

“We just had a small mishap in the kitchen. Everything’s fine,” she told the crowd.

Through it all, it would be up to audience members to try and figure out the clues to the show’s mysteries.

“There will be some obvious, and some not-so-obvious things,” Mason said.

Mason said it was good to see the turnout for the dinner theater. News about the event spread through word-of-mouth, and by the day of the show, about 100 people were signed up.