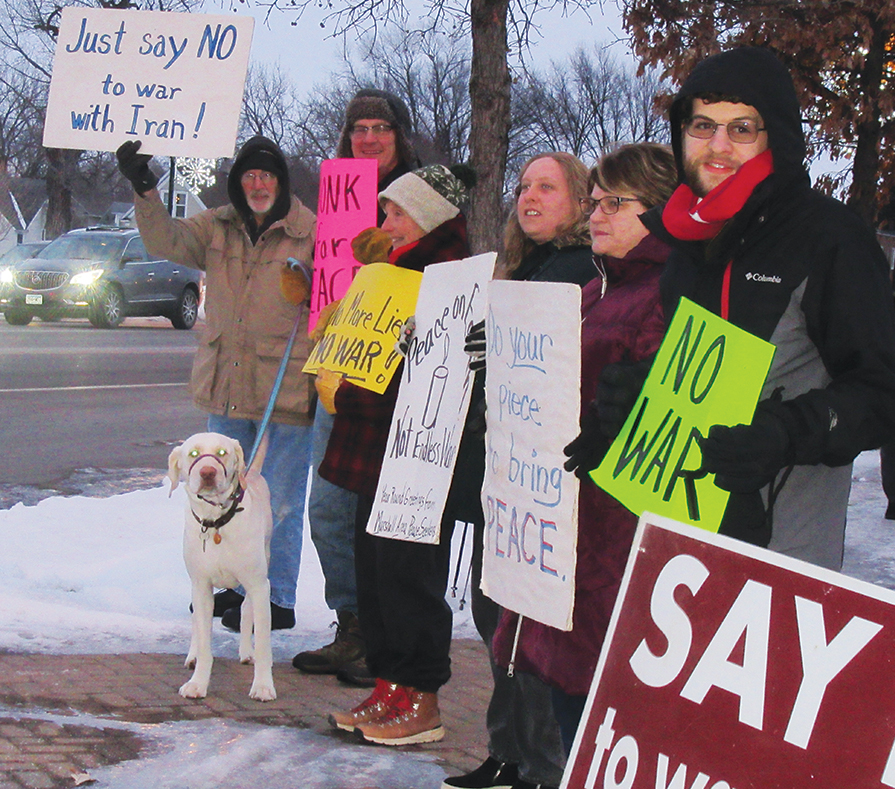 Photo by Deb Gau Around a dozen people gathered at the corner of Main Street and East College Drive on Thursday evening to speak out for peace.

MARSHALL — It had been a long time since they had spoken out against military strikes in the Middle East. But a few of the posters members of the Marshall Area Peace Seekers held hadn’t changed much at all. One sign, that originally read “Say No To War With Iraq,” had the word “Iraq” covered over with a piece of paper reading “Iran.”

“We haven’t stopped being at war,” said Jeff Kolnick, one of the dozen or so people gathered at the corner of Main Street and East College Drive on Thursday evening. And after military tensions between the U.S. and Iran flared last week, MAPS members were again calling for an end to violence.

“I hope that we don’t go to war,” said Darwin Dyce.

The MAPS group has been meeting for years, going back to a regular Tuesday vigil for peace during the U.S.’ military action in Iraq, Dyce said. Over time, the group went on to advocate for other issues, and in recent years they’ve held vigils in support of science, and in support of immigrants.

“When things come up, people show up,” Dyce said.

Area residents held braved the cold Thursday evening, holding signs reading “Honk For Peace,” and other slogans. Every so often, they did draw a honk from a passing car or truck.

While tensions between the U.S. and Iran didn’t seem to have escalated as much as people feared they might last week, after the death of Iranian general Qasem Soleimani, MAPS members said it was still important to be a voice for peace. Kolnick said it was important to remember the death and suffering caused by war.

Julie Walker said it was also important to remember how war affects people who are already vulnerable. In addition to holding a sign, Walker was wearing face paint reading “War Kills the Poor.”

“The people who are always hurt the most by war and violence are the people who have the least to begin with,” she said.