Dr. John Frerich handing over ownership role to Dr. Andrew Frerich, but staying on as employee 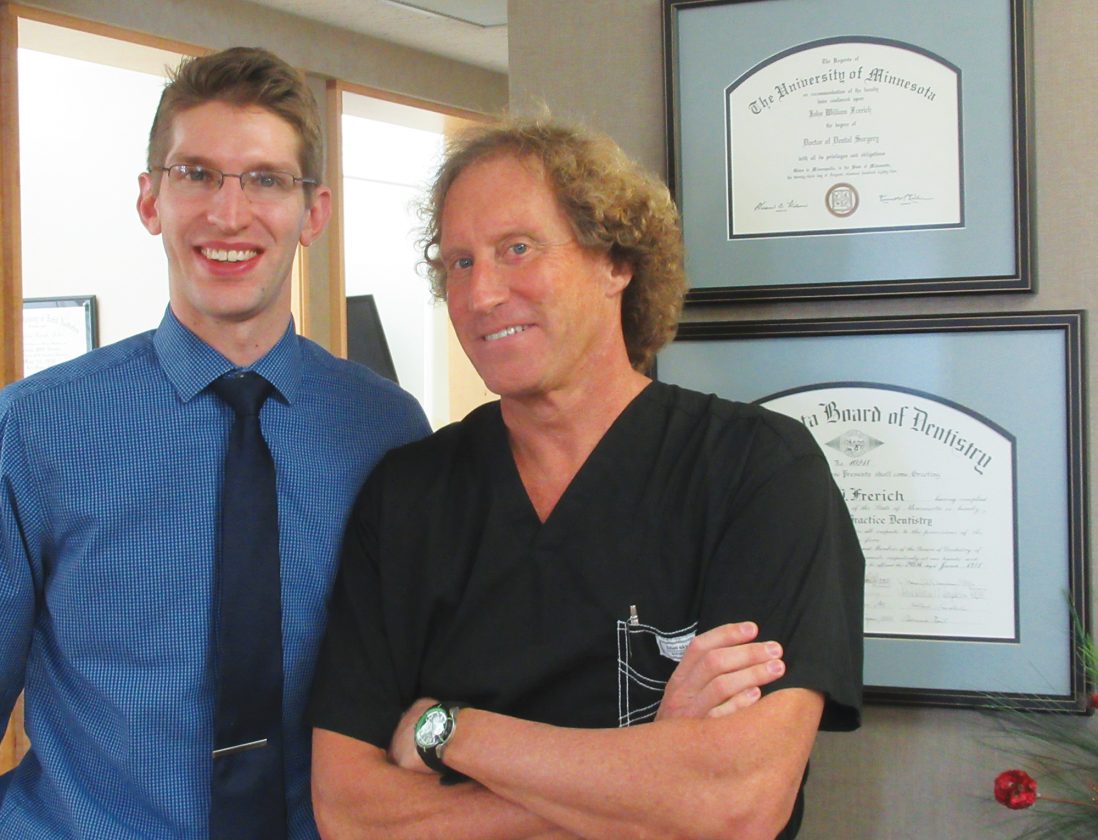 MARSHALL — Marshall Dental Excellence patients won’t be seeing Dr. John Frerich in his familiar crisp shirt and tie anymore. After almost 30 years as a dentist in Marshall — Frerich has given up his shirt and tie.

He nows wears scrubs to work.

“After wearing a shirt and tie to work for many years, I’ve earned the right to not have to anymore,” he said.

There is another change at Marshall Dental Excellence. His son Dr. Andrew Frerich assumed ownership of the practice Jan. 1. After working for his father the past couple years, Dr. Andrew is now the boss, and Dr. John is quite happy with the new arrangement.

Along with the shirt and tie, Dr. John has scrubbed winters off his shoulders. He spends three weeks out of the month at his home in Florida and one week in the office on East College Drive in Marshall.

The Frerichs are working to make sure those are about the only changes patients and nine staff members will feel in the transition.

Dr. Andrew said he doesn’t plan to change anything other than kicking his dad out of his office so he can do the paperwork — something Dr. John won’t mind leaving behind.

“I’m ready to give up the day-to-day responsibilities — payroll, paying bills — I’ll be the best dang employee he ever had and I can be a good mentor,” he said.

“There won’t be any changes,” said Dr. Andrew. “A lot of things have been working really well and you want to master those systems that are in place.”

“I think it’s important to be as smooth as possible,” said Dr. John. “And then tweak things rather than re-invent the wheel.”

Dr. John said he has confidence in his son.

Dr. John Frerich started his practice on 113 N. 3rd St. before moving to new quarters on East College Drive in 2003.

He was one of the first dentists to bring sedation dentistry to Minnesota in 2000.

“I’ve done right around 3,500 sedations for high-fear patients,” he said. “It’s been a really fun part of the practice over the years to develop that niche.”

As someone who had bad experiences with a dentist as a youth, Dr. John understands the reluctance some patients may have to go to the dentist.

“I’m a high-fear patient. I understand. We’ll do everything that we can to make sure that you are well taken care of,” he said. “My rules are pretty simple — I tell the patient, ‘you’re in control.'”

“We do everything from Invisalign to metal braces — but we use Tip-Edge brackets, which straighten teeth about 30 percent quicker — they’re a really great system,” he said. “I try to do as much under one roof as possible. Because when you live here, your specialists are how far away — 90 to 120 miles — it’s a whole day. So the whole idea is to do what you can do here.”

In addition to convenience, Dr. John also said there is the trust factor. His patients trust his work.

Previous to joining Marshall Dental Excellence, Dr. Andrew was working at a dental office in Buffalo. He is a graduate of the University of Minnesota School of Dentistry. After nine years in the metro area, it was time to decide whether to join his current practice or join his dad in Marshall.

“About three years ago he asked me, ‘Dad, can we talk?’ “ Dr. John said. “He thought, ‘Dad has a pretty nice practice, I could learn a lot.’ So I brought him on as an associate.”

Dr. Andrew said he wasn’t sure if the dental office he had been working at was the right fit.

“I had been coming down here about one day a week to get more experience from him,” he said. “Being an exceptional dentist, it was awesome to get to spend that time here.”

So Dr. Andrew and his wife Kate (Hoganson), who have three children, moved back to their hometown. Both are 2007 Marshall High School graduates.

He is glad to get away from metro traffic and back to his roots.

“It’s where I grew up, I have family here. It’s a great place to raise a family,” Dr. Andrew said. “I love the community.”

Kate Frerich works at Marshall Dental Excellence and also is a group fitness instructor at the Marshall Area YMCA.

Dr. John said he had no expectation that his son would become a dentist or take over his practice — it was all him.

Dr. Andrew wants to learn all he can from his dad.

“I wanted to learn implants and sedation from him,” he said. “You can take courses and training, but to have someone there who’s had the experience to help guide you, that’s a huge asset.”