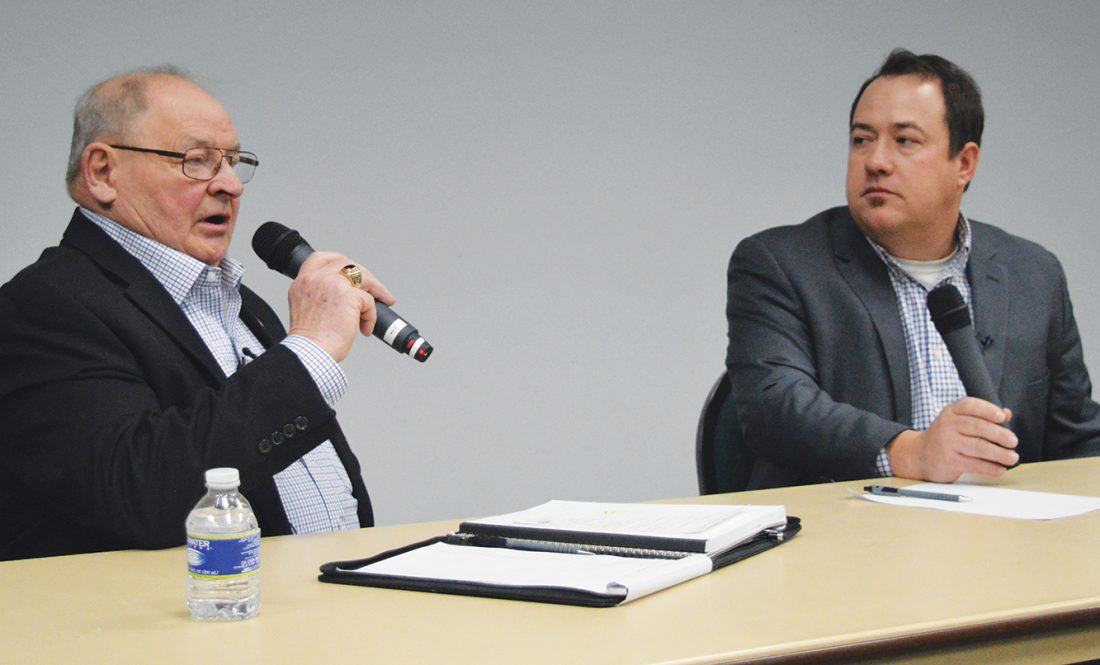 MARSHALL — A few long-running concerns, like the need for better child care access in southwest Minnesota, came back before area legislators Tuesday morning, at a town hall meeting at the Marshall Area YMCA.

“I think, obviously we’ve got a long way to go,” Swedzinski said. “A lot of issues that we’re seeing and hearing from (child care) providers are still there.”

At the same time, legislators are also working with a new administration, and with a large state agency, the Department of Health and Human Services.

“It’s maybe something we’re not hearing about as much, just because the other areas within that agency are so large,” Swedzinski said. But the concerns, like allowing providers to take care of more children, were still there. “We were looking at, we created some bills that would potentially change it through law, but it’s a lot more complicated than that.”

“The common theme that kept coming up was regulation,” Dahms said. “What we were finding is there was a lot of differences in how day cares were being regulated from one community to another community.”

“One thing that is being worked on is to have a more focused operation in St. Paul, so everybody is operating under the same regulations,” Dahms said.

At Tuesday’s meeting, Dahms and Swedzinski went over major issues facing Minnesota lawmakers this year, before taking questions and concerns from the audience.

This year is both a bonding year and a policy year for the state Legislature, Dahms said. Lawmakers will be acting on a bonding bill that Swedzinski said he guessed would be around $1 billion or smaller.

Dahms said the state also has an estimated $1.3 million surplus, after putting money toward a rainy day fund. As to whether that means the state could have a possible supplemental budget, Dahms said state senators will be discussing the matter this week.

Audience members at the town hall brought a variety of concerns forward to Dahms and Swedzinski. One was the push in the Legislature last year to change Minnesota’s electrical utilities over to 100% renewable sources.

“There’s other ways to do this,” than by state mandate, said Brad Roos, general manager of Marshall Municipal Utilities. Recently, utility providers like MMU and Lyon-Lincoln Electric began programs where customers could voluntarily go to renewable energy sources, Roos said.

“I think the fault comes when you have a statewide mandate,” Swedzinski said. Added potential cost increases from mandates can ultimately affect whether businesses decide to come to Minnesota, Swedzinski and Dahms said.

Dahms said he also thought the intensity of support for green energy initiatives could wane after the election year is over.

Support for victims of domestic violence was another topic brought forward as a concern. Becci TenBensel executive director of the WoMen’s Rural Advocacy Programs, said it was an issue that overlaps with needs for more affordable housing in southwest Minnesota. The number of WRAP’s clients has almost doubled in the past couple of years, TenBensel said. At the same time, many people trying to leave abusive relationships are having trouble being able to afford their own housing.

“The other thing is the Violence Against Women Act, which is federally funded, has not been renewed,” TenBensel said. “A lot of our funding comes from the Victims of Crime Act, and they’re taking money out of the Victims of Crime Act to fund VAWA right now. In a couple years, we are looking at cuts of 30 to 50% of the grants that we are receiving.”