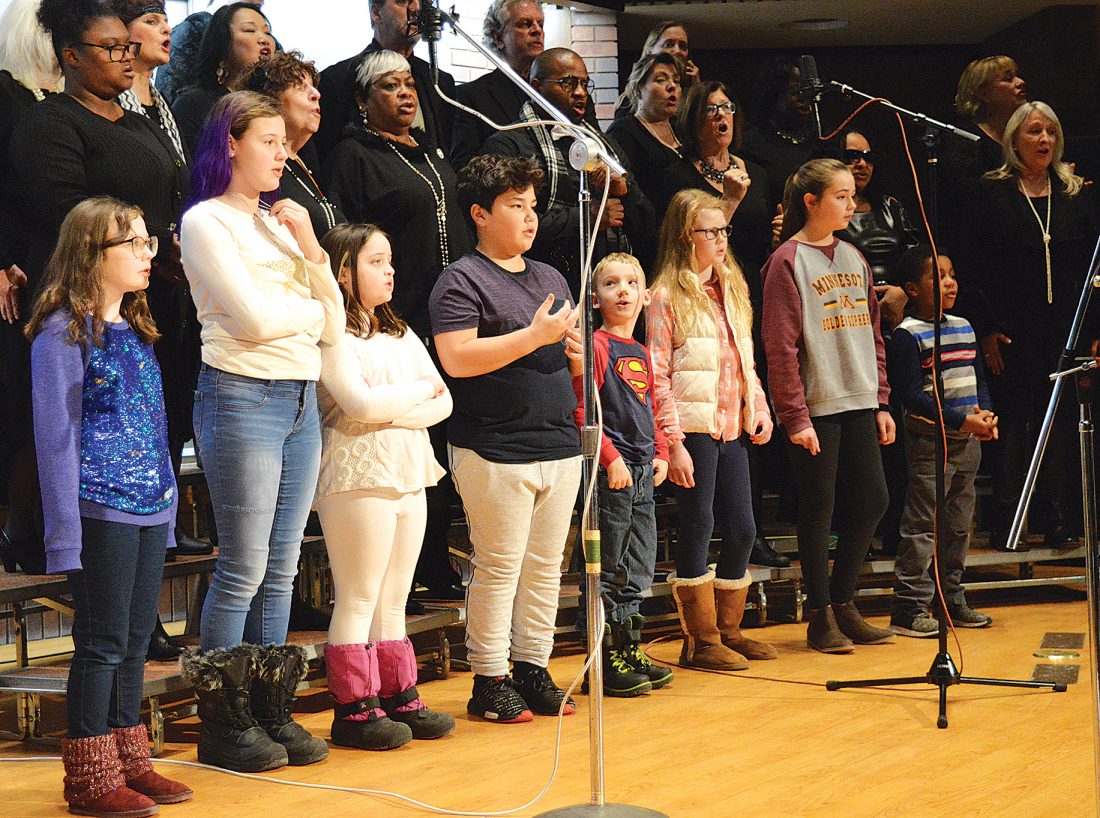 Photo by Deb Gau A choir of area kids joined the Twin Cities Community Gospel Choir during a Martin Luther King Day program held Monday night at SMSU. The choirs sang songs including “Now Is the Needed Time,” and the kids shared artwork they drew for the program. The keynote speaker at Monday’s program was Civil Rights activist Leslie McLemore.

“I have never heard anybody in my life as eloquent as Dr. King,” McLemore said. But while King was known for messages of peace and love, he also spoke truth to power, and lived a life of “servant leadership.” Traditional leadership can serve an organization or be self-serving, McLemore said, “But Martin Luther King was about the business of serving humanity.”

Speaking to a crowd of more than 100 people at Southwest Minnesota State University on Monday night, McLemore called on area residents — especially young people — to follow King’s example into a lifetime of service.

Area residents and SMSU students observed Martin Luther King Day by packing food for Food4Kids in Marshall, and with an evening program at the university campus. Titled “Now Is the Needed Time,” the program featured performances by the Twin Cities Community Gospel Choir, and a local children’s choir. McLemore, a veteran of the Civil Rights movement, was the keynote speaker.

McLemore first got involved with the Civil Rights movement while he was a student at Rust College in Mississippi. He served as a field secretary for the Student Non-Violent Coordinating Committee, and worked with efforts to register black voters.

McLemore asked the audience to think about the examples of Civil Rights leaders like King, Fannie Lou Hamer, and Winson Gates Hudson. All three had strong faith, were called to serve, and had a love of freedom and justice, he said. Hudson registered to vote in Mississippi in 1937, a time when it was dangerous for her to do so, McLemore said. She was a leader in movements for black voter registration, and for education in her community. Hudson’s home was bombed on more than one occasion, McLemore said. Hamer was “a giant in the Civil Rights movement,” who fought for equality and enfranchisement for black Americans, and faced both eviction and a beating by police in Winona, Mississippi.

McLemore urged the audience to follow the call to service, and to take part in democracy.

“Let’s serve, let’s get involved in our communities,” he said. Registering to vote, and taking part in government, are still important today, he said.

“We are living in an important moment in our history,” McLemore said. Young people will need to help address poverty, inequality and voter suppression, he said. He urged young people to pursue their passions as a way to find opportunities to serve.

“We have more things in this country that unite us than divide us,” McLemore said.