Welcome to the Hotel Marshall ….

... where the past is long, the future is cloudy 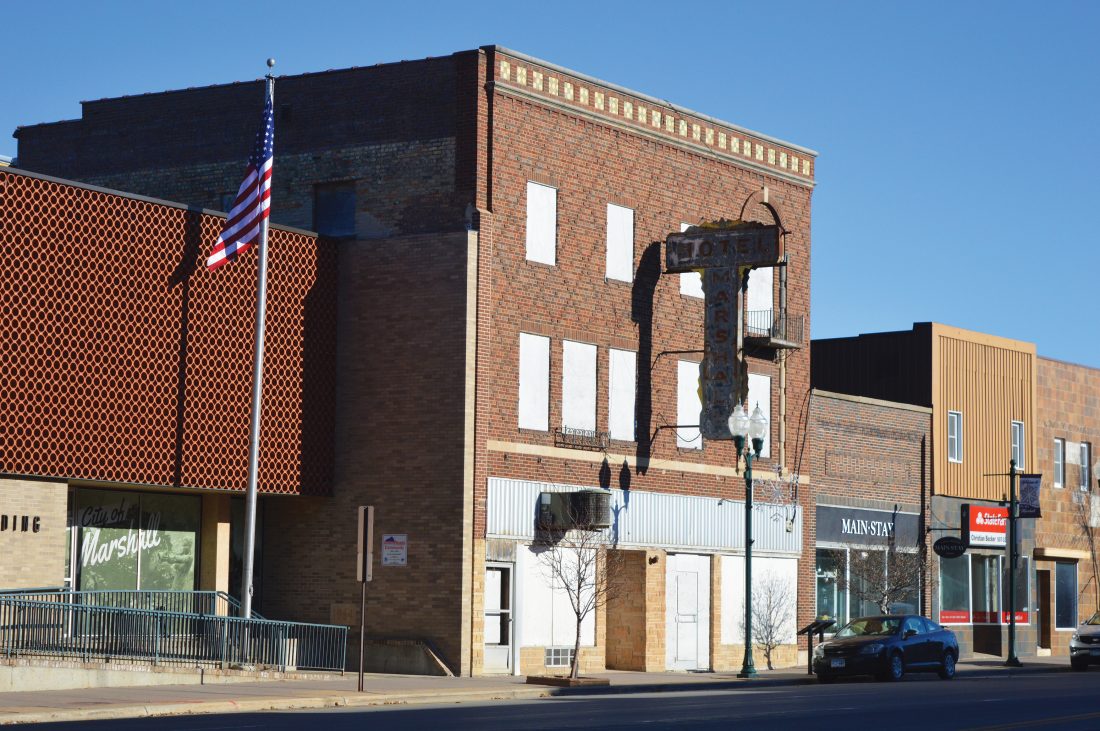 Photo by Deb Gau The future of the vacant former Hotel Marshall building (above) is in question. The Marshall city hall building next door is getting ready for some major renovations, but there aren’t currently plans for the city to tear down the hotel. The city has fielded some interest from possible developers in the past, but nothing panned out.

MARSHALL — It’s stood on Marshall’s Main Street for over 90 years. But there are a lot of unanswered questions for the future of the former Hotel Marshall.

The hotel building, which has been boarded up for years, now belongs to the city of Marshall. Right next door, the Marshall city offices are currently getting ready for major renovations over the next year or so. However, there are currently no plans to tear down or renovate the former hotel.

“There is interest from time to time” in the hotel, said Marshall City Administrator Sharon Hanson. So far, none of the interest from potential developers has turned into plans to fix up the building. Hanson said the city wants to explore redevelopment for the hotel, rather than going straight to demolition.

Although it’s empty now, the hotel building has seen a lot of activity in the past. The building dates back to 1926, the same year that the New Atlantic Hotel was also built on Main Street, according to news reports of the time.

Marshall’s location as a business hub and a stop for travelers has helped drive a need for hotel rooms over the years, said Marshall resident Art Olson.

“Marshall’s always been a salesman town,” Olson said, with both salesmen traveling through the area and local businesses employing their own sales forces. “It was also a truck town,” he said.

When it was first built, the Marshall Hotel was called the Hotel Brantman, after original owner P.J. Brantman. Brantman was the proprietor of Pete’s Cafe and Bakery in Marshall, and according to a 1926 story in the News Messenger of Lyon County, Brantman also opened restaurants in Canby, Minneota and Tracy.

The Hotel Brantman had 60 rooms, plus a dining room and cafe on the ground floor. More than 250 reservations were made to attend the hotel’s grand opening banquet on Sept. 22, 1926. Reports from the News Messenger described the hotel’s “rich and luxurious” furnishings, and amenities like a taxi service and hot and cold softened water.

The hotel changed its name to the Hotel Marshall in 1932, according to the News Messenger. In April 1936, the newspaper reported that the hotel was being restored from damage caused by a fire in a ventilation chute.

Businesses continued to operate in the hotel building up through the 1970s. Olson said Schwan’s rented out some of the space during the ’70s. At one point, the Marshall Senior Center was also located at the hotel, said Adult Community Center coordinator Barb Lipinski. According to the Senior Center’s historical records, the center moved from the basement of the Marshall public library at Third and Lyon Street to “new quarters in the Marshall Hotel.” The Senior Center stayed there until 1976, when it needed more room and moved to the Marshall Municipal Building.

However, the growth of other motels and restaurants in Marshall changed things for the downtown hotels over the years, Olson said. By the 2000s, the Marshall Hotel building was vacant.

In 2009, an inspection by a state fire marshal found the building to be a fire hazard, and unsafe for firefighters to enter. The city of Marshall issued a hazardous building order on the property in 2012, and in 2015 started the eminent domain process to acquire the building from owner Joseph Bot.

This spring, the city awarded a $72,000 bid to remove and dispose of hazardous materials and debris from the building.

“We took a lot of junk out of it,” said Marshall Public Works Director Glenn Olson. But the interior of the building would need a lot of work before it could be turned into commercial or other space again. Olson and Hanson said the hotel currently doesn’t have heat or electricity. There would also be possible accessibility issues that would have to be addressed to turn the building into office or commercial space.

Hanson said the city does get inquiries about the former hotel building, which is part of the reason the building isn’t being demolished at the same time as the city hall construction. The city has been in discussion with possible developers a couple of times, during the same time as planning for the new city hall.

“There was one really strong interested developer locally,” Hanson said, but things didn’t work out financially for them. The city was in discussions with another potential developer that also didn’t pan out, she said.

A third possibility is APX Construction, the developer that is proposing to build mixed commercial and residential space on “Block 11,” near the intersection of Main Street and College Drive in Marshall. However, Hanson said the city doesn’t know a lot about APX’s ideas or interest in the hotel yet.

“We’re basically concentrating on Block 11,” she said. Earlier this fall the city entered into a pre-development agreement with APX, which requires APX to provide more detailed information about the proposed development and financing for the project.

As the city learns more about the Block 11 project, Hanson said, they may know more about possibilities for the hotel building. On the other hand, she said, if things continue into the future with no takers for the hotel, the city may have to look at tearing it down.